In patent law, a patent pool is a consortium of at least two companies agreeing to cross-license patents relating to a particular technology. The creation of a patent pool can save patentees and licensees time and money, and, in case of blocking patents, it may also be the only reasonable method for making the invention available to the public. [1] Competition law issues are usually important when a large consortium is formed.

One of the first patent pools, Sewing Machine Combination, was formed in 1856, by sewing machine manufacturers Grover, Baker, Singer, and Wheeler & Wilson, all accusing the others of patent infringement. They met in Albany, New York to pursue their suits. Orlando B. Potter, a lawyer and president of the Grover and Baker Company, proposed that, rather than sue their profits out of existence, they pool their patents. [2]

In 1917, the two major patent holders for airplanes, the Wright Company and the Curtiss Company, had effectively blocked the building of new airplanes, which were desperately needed as the United States was entering World War I. The U.S. government, as a result of a recommendation of a committee formed by Franklin D. Roosevelt, then Assistant Secretary of the Navy, pressured the industry to form a patent pool, the Manufacturer's Aircraft Association. [3] [4] [5]

In a more modern example, in August 2005, a patent pool was formed by about 20 companies active in the Radio Frequency Identification (RFID) domain. [6] The RFID Consortium picked Via Licensing to administer its patent pool in September 2006. [7]

As in these examples many industries could not function without patent pools since the coordination costs (risk, negotiation, etc.) would otherwise be too high. Patent pools are only one example of cases where members of an otherwise competitive industry join in common cause to create some resource that is to their collective benefit. For example, the insurance industry pools claims data to collectively reduce risk; the catalog sales industry pools sales data to better model their customers; the auto industry collaborates to standardize components; and in the software industry some companies actively contribute to open-source projects.[ citation needed ]

Patent pools do not eliminate risk, they only temper it. Patent holders (including other patent pools) outside the pool can still create cost and risk for the industry. While it is rare for a patent pool to indemnify licensees, [8] [ self-published source? ] a pool does help to assure a common interest will emerge should one member be accused of infringement by a third party. Flaws in the design of the pool's governance can create the risk that one member can break the common cause of the group. Examples of well-known[ citation needed ] such cases include the MPEG-2, MPEG-4 Part 2 and H.264 video coding standards, and the DVD6C pool.[ citation needed ] The MPEG-2 patent pool has also been criticized because by 2015 more than 90% of the MPEG-2 patents will have expired but as long as there are one or more active patents in the MPEG-2 patent pool in either the country of manufacture or the country of sale the MPEG-2 license agreement requires that licensees pay a license fee that does not change based on the number of patents that have expired. [9] [10] [11] [12]

Since the 1990s, patent pools have been viewed by U.S. regulatory authorities in a positive light. In 1995, the U.S. Department of Justice (DOJ) and U.S. Federal Trade Commission (FTC) released the “Antitrust Guidelines for the Licensing of Intellectual Property” [13] which stated that the pooling of patents may have “…pro-competitive benefits”. [14] The Antitrust Division of the DOJ later issued a letter in support of the MPEG-2 pool. [13] However, stipulations exist to ensure pools do not function anti-competitively. As required by the DOJ, patents in the pool must be essential, non-substitutable and the owners must maintain the right to individually license their patents. [13] In addition, the DOJ may monitor the royalty rates collected by the firm. [13]

An aileron is a hinged flight control surface usually forming part of the trailing edge of each wing of a fixed-wing aircraft. Ailerons are used in pairs to control the aircraft in roll, which normally results in a change in flight path due to the tilting of the lift vector. Movement around this axis is called 'rolling' or 'banking'.

A cross-licensing agreement is a contract between two or more parties where each party grants rights to their intellectual property to the other parties. 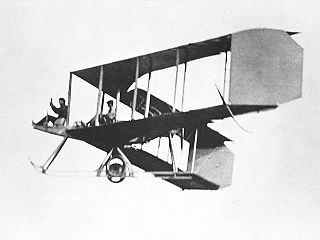 The Burgess Company was a U.S. airplane manufacturer between 1910 and 1918.

Harry Aubrey Toulmin Sr. was the American lawyer located in Springfield, Ohio, who wrote the "flying machine" patent application that resulted in the patent granted to Dayton inventors Wilbur and Orville Wright on May 22, 1906.

General Talking Pictures Corp. v. Western Electric Co., 304 U.S. 175 (1938), was a case that the Supreme Court of the United States decided in 1938. The decision upheld so-called field-of-use limitations in patent licenses: it held that the limitations were enforceable in a patent infringement suit in federal court against the licensee and those acting in concert with it—for example, a customer that knowingly buys a patented product from the licensee that is outside the scope of the license.

United States v. Univis Lens Co., 316 U.S. 241 (1942), is a decision of the United States Supreme Court explaining the exhaustion doctrine and applying it to find an antitrust violation because Univis's ownership of patents did not exclude its restrictive practices from the antitrust laws. The Univis case stands for the proposition that when an article sold by a patent holder or one whom it has authorized to sell it embodies the essential features of a patented invention, the effect of the sale is to terminate any right of the patent holder under patent law to control the purchaser's further disposition or use of the article itself and of articles into which it is incorporated as a component or precursor.

The Wright Brothers patent war centers on the patent they received for their method of an airplane's flight control. The Wright brothers were two Americans who are widely credited with inventing and building the world's first flyable airplane and making the first controlled, powered and sustained heavier-than-air human flight on December 17, 1903.

Licensed production is the production under license of technology developed elsewhere. It is an especially prominent commercial practice in developing nations, which often approach licensed production as a starting point for indigenous industrial development.

The Manufacturer's Aircraft Association (MAA) was a trade association and patent pool of U.S. aircraft manufacturers formed in 1917.

The following outline is provided as an overview of and topical guide to patents:

Access Advance LLC is an independent licensing administrator company formed to lead the development, administration, and management of patent pools for licensing essential patents of the most important standards-based video codec technologies. The company, originally known as HEVC Advance LLC, changed its LLC name in October 2020 to Access Advance LLC to convey its expanded focus on licensing additional standards-based video codec technologies, such as Versatile Video Coding (VVC), for which the company is planning to launch a new VVC licensing program in early 2021. Access Advance currently offers a patent pool license via the HEVC Advance Patent Portfolio License, which grants a license to over 10,000 patents essential to practicing the High Efficiency Video Coding (HEVC) video standard, which is also known as MPEGH Part 2 and H.265. HEVC/H.265 is an advanced video compression standard developed through a collaboration between the ITU and ISO/IEC MPEG standard setting organizations.

United States v. Vehicular Parking Ltd. is a patent–antitrust case in which the United States Government eroded the doctrine of United States v. General Electric Co. permitting patentees to fix licensee prices, but failed to persuade the court to decree royalty-free licensing as a remedy.

United States v. New Wrinkle, Inc., 342 U.S. 371 (1952), is a 1952 Supreme Court decision in which the Court held that a claim of conspiracy to fix uniform minimum prices and to eliminate competition throughout substantially all of the wrinkle finish industry of the United States by means of patent license agreements was, if proved, a violation of § 1 of the Sherman Act. That one of the defendants, a patent-holding company, abstained from manufacturing activities, did not ship goods in commerce, and engaged solely in patent licensing did not insulate its activity from § 1. Making these license contracts for the purpose of regulating distribution and fixing prices of commodities in interstate commerce is subject to the Sherman Act, even though the isolated act of contracting for the licenses occurs within a single state. Patents give no protection from the prohibitions of the Sherman Act when the patent licensing agreements are used to restrain interstate commerce and fix prices of goods shipped in commerce.

Besser Mfg. Co. v. United States, 343 U.S. 444 (1951), is a 1951 patent–antitrust decision of the United States Supreme Court in which the Court upheld a ruling that the dominant U.S. manufacturer of concrete block–making machines violated the antitrust laws when it acquired its two principal competitors, bought important patents, made bad–faith threats of patent infringement suits, and entered into patent licensing agreements in which the parties were given veto powers over any prospective additional licensees. The Supreme Court approved the district court's grant of compulsory, reasonable–royalty licensing of the patents and compulsory sales of patented machines, holding that such relief "is a well–recognized remedy where patent abuses are proved in antitrust actions, and it is required for effective relief."

United States v. Line Material Co., 333 U.S. 287 (1948), is a decision of the United States Supreme Court limiting the doctrine of the 1926 General Electric decision, excusing price fixing in patent license agreements. The Line Material Court held that cross-licenses between two manufacturer competitors, providing for fixing the prices of the licensed products and providing that one of the manufacturers would license other manufacturers under the patents of each manufacturer, subject to similar price fixing, violated Sherman Act § 1. The Court further held that the licensees who, with knowledge of such arrangements, entered into the price-fixing licenses thereby became party to a hub-and-spoke conspiracy in violation of Sherman Act § 1.