The qualifications to be a member of the House are found in the state Constitution: "Each Representative, at the time of his election, shall be a qualified voter of the State, and shall have resided in the district for which he is chosen for one year immediately preceding his election." Elsewhere, the constitution specifies that qualified voters that are 21 are eligible for candidacy except if otherwise disqualified by the constitution, and that no elected officials may deny the existence of God, although the latter provision is no longer enforced, as it would be illegal to do so.

The Virginia General Assembly is the legislative body of the Commonwealth of Virginia, the oldest continuous law-making body in the Western Hemisphere, the first elected legislative assembly in the New World, and was established on July 30, 1619. The General Assembly is a bicameral body consisting of a lower house, the Virginia House of Delegates, with 100 members, and an upper house, the Senate of Virginia, with 40 members. Combined, the General Assembly consists of 140 elected representatives from an equal number of constituent districts across the commonwealth. The House of Delegates is presided over by the Speaker of the House, while the Senate is presided over by the Lieutenant Governor of Virginia. The House and Senate each elect a clerk and sergeant-at-arms. The Senate of Virginia's clerk is known as the "Clerk of the Senate".

The Constitution of the State of North Carolina governs the structure and function of the state government of North Carolina, one of the United States; it is the highest legal document for the state and subjugates North Carolina law. All U.S. state constitutions are, according to the United States Supreme Court, subject to federal judicial review; any provision can be nullified if it, in the view of a majority of the Justices of the Supreme Court, constituted from time to time, conflicts with the US Constitution or any federal law pursuant to the Constitution, even if the identical language was previously upheld as valid by the court.

Joseph Riddick was a North Carolina politician who served as Speaker of the North Carolina Senate for 11 years from 1800 to 1804 and from 1806 to 1811. Only Bartlett Yancey and Marc Basnight have led the state Senate for a longer span of time. Riddick was also a veteran of the American Revolutionary War. He attained the rank of General in the NC Militia.

This article delineates the age of candidacy laws of the federal government and individual states of the United States.

Jerry Lee Carter was an American politician who served as a Republican member of the North Carolina House of Representatives, having been initially elected in 2018. He represented District 65, covering most of Rockingham County. He was the founder and pastor of Reidsville Baptist Church in Reidsville, North Carolina.

The North Carolina General Assembly of 1836–1837 met in Raleigh from November 21, 1836 to January 23, 1837. The assembly consisted of the 120 members of the North Carolina House of Commons and 50 senators of North Carolina Senate elected by the voters in August 1836. During the 1836 session, the legislature created Davie County, but it was not until 1842 that Davie County began sending delegates to the General Assembly. William H. Haywood, Jr was elected speaker of the House of Commons and Charles Manley was elected clerk. Hugh Waddell was elected President of the Senate and Thomas G. Stone was elected Clerk. Richard Dobbs Spaight, Jr. was the Governor in 1835 and 1836. He was elected by the previous legislature. In 1837, the Governor of North Carolina, Edward Bishop Dudley from New Hanover County, was elected, for the first time, by the people vice the legislature. The Whigs would control North Carolina politics until 1850. While in power, their notable achievements included funding railroads and roads, public education, and State chartered banks. 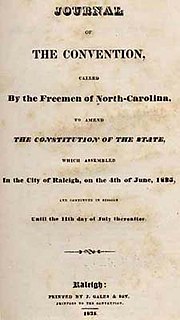 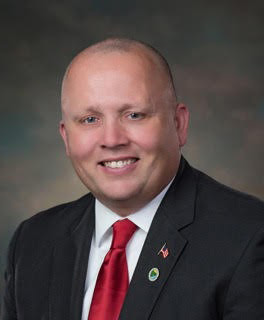 Armor Reece Pyrtle Jr. is a Republican member of the North Carolina House of Representatives who has represented the 65th district since 2021. He was appointed in August 2021 to the fill the vacancy left by Jerry Carter, who died in office. A retired police chief from Eden, North Carolina, Pyrtle previously served on the Rockingham County board of commissioners from 2016 to 2021.

North Carolina's 65th House district is one of 120 districts in the North Carolina House of Representatives. It has been represented by Republican Reece Pyrtle since 2021.