Since the election of 1967 (1968 Session), the Assembly has consisted of 80 members. Two members are elected from each of New Jersey's 40 legislative districts for a term of two years, each representing districts with average populations of 232,225 (2020 figures), with deviation in each district not exceeding 3.21% above and below that average. [1] To be eligible to run, a potential candidate must be at least 21 years of age, and must have lived in their district for at least one year prior to the election, and have lived in the state of New Jersey for two years. They also must be residents of their districts. Membership in the Assembly is considered a part-time job, and many members have employment in addition to their legislative work. Assembly members serve two-year terms, elected every odd-numbered year in November. Four current members of the Assembly hold other elective office, as they are grandfathered in under a New Jersey law that banned multiple office holding in 2007.

Members of the NJ General Assembly receive an annual base salary of $49,000 with the Senate President and the Assembly Speaker earning slightly more. [2] [3] Members receive $110,000 for staff salaries. In addition, they receive 12,500 postage stamps, stationery and a telephone card. They receive New Jersey State health insurance and other benefits. The total cost to the State of New Jersey for each member of the general assembly is approximately $200,000 annually. [4]

Note: The first three subsections below end with a constitutional year: 1776, 1844 or 1947. The fourth subsection ends in 1966, the year of the U.S. Supreme Court decision that required legislative apportionment based on the principle of "one person, one vote".

The following is a list of speakers of the Assembly since 1703. [8]

On December 6, 1775, Gov. William Franklin prorogued the New Jersey Legislature until January 3, 1776, but it never met again. [9] On May 30, 1776, Franklin attempted to convene the legislature, but was met instead with an order by the New Jersey Provincial Congress for his arrest. [10] On July 2, 1776, the Provincial Congress approved a new constitution which ordered new elections; on August 13 an entire new legislature was elected.

The Constitution of 1844 expanded the General Assembly to 60 members, elected annually and apportioned to the then-nineteen counties by population. [11]

The New Jersey Senate was established as the upper house of the New Jersey Legislature by the Constitution of 1844, replacing the Legislative Council. There are 40 legislative districts, representing districts with average populations of 232,225. Each district has one senator and two members of the New Jersey General Assembly, the lower house of the legislature. Prior to the election in which they are chosen, senators must be a minimum of 30 years old and a resident of the state for four years to be eligible to serve in office. 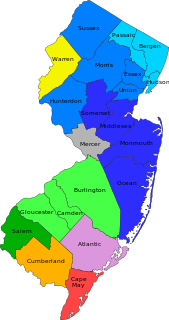 New Jersey has seven metropolitan statistical areas (MSAs) defined by the federal Office of Management and Budget. The New York City and Philadelphia MSAs are also divided into divisions, of which there are five in New Jersey. Every statistical area and county in New Jersey belong to the Northeast Megalopolis.

The Crossroads of the American Revolution National Heritage Area is a federally designated National Heritage Area encompassing portions of fourteen counties in New Jersey that were the scene of significant actions in the American Revolutionary War in late 1776 through 1778. The designated area covers the Delaware and Hudson valleys in New Jersey and the central portion of the state between the valleys where the Continental Army fought forces under British command. The National Heritage Area includes Morristown National Historical Park and sites associated with the Battle of Monmouth as well as Princeton, New Jersey, the meeting place of the Continental Congress when peace was declared in 1783.

The 2008 congressional elections in New Jersey were held on November 4, 2008 to determine who would represent the state of New Jersey in the United States House of Representatives. New Jersey has thirteen seats in the House, apportioned according to the 2000 United States Census. Representatives are elected for two-year terms; those elected serve din the 111th Congress from January 4, 2009 until January 3, 2011. The election coincided with the 2008 U.S. presidential election.

The members of the New Jersey Legislature are chosen from 40 electoral districts. Each district elects one Senator and two Assemblymen. 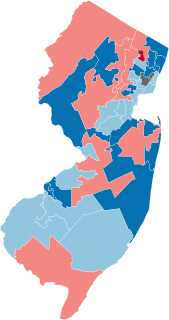 The 1973 New Jersey State Senate Senate elections were held on November 6. The result of the elections were large gains for the Democratic Party, which won control of the Senate. The party picked up twelve seats. This election marked the first time since 1967 that Democrats controlled the State Senate.

A general election was held in the U.S. state of New Jersey on November 3, 2015. Primary elections were held on June 2. The only state positions up in this election cycle were all 80 seats in the New Jersey General Assembly and one Senate special election in the 5th Legislative District. In addition to the State Legislative elections, numerous county offices and freeholders in addition to municipal offices were up for election. There were no statewide ballot questions this year though some counties and municipalities may have had a local question asked. Non-partisan local elections, some school board elections, and some fire district elections also happened throughout the year.

The 1967 New Jersey State Senate elections were held on November 7.