Kongsi (Chinese :公司; pinyin :gōngsī; Wade–Giles :kung-ssu; Pe̍h-ōe-jī :kong-si) is a Hokkien transcription term meaning "company", especially businesses which has been incorporated. However, the word has other meanings under different historical contexts. [1] [2] Kongsi were most commonly known as Chinese social organizations or partnerships, but the term was also used for various Chinese institutions. Amongst overseas Chinese, the word kongsi was applied to reference both clan organizations, whose members shared a common descent, and social clubs, for Chinese immigrants originating from the same province. After the 19th century, these organizations came to be known as hui guan or hwee kuan (會館, literally meaning "meeting hall").

Functions of the Kongsi system

The system of kongsi was utilized by Cantonese throughout the diaspora to overcome economic difficulty, social ostracism, and oppression.[ citation needed ] In today's Cantonese communities throughout the world, this approach has been adapted to the modern environment, including political and legal factors.[ citation needed ] The kongsi is similar to modern business partnerships, but also draws on a deeper spirit of cooperation and consideration of mutual welfare. It is believed by some that the development and thriving of Cantonese communities worldwide are the direct result of the kongsi concept.[ citation needed ] A vast number of Cantonese-run firms and businesses that were born as kongsi ended up as multinational conglomerates. 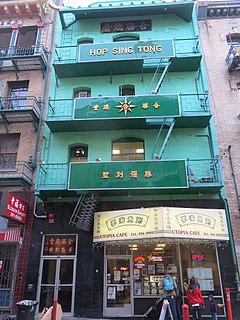 A tong is a type of organization found among Chinese immigrants predominantly living in the United States, with smaller numbers in Canada, Australia and the United Kingdom. In Chinese, the word tong means "hall" or "gathering place". These organizations are described as secret societies or sworn brotherhoods and are often tied to criminal activity. In the 1990s, in most American Chinatowns, clearly marked tong halls could easily be found, many of which have had affiliations with Chinese organized crime.

The Ghee Hin Kongsi was a secret society in Singapore and Malaya, formed in 1820. Ghee Hin literally means "the rise of righteousness" in Chinese. The Ghee Hin often fought against the Hakka-dominated Hai San secret society.

Hui is a Chinese word, generally meaning 'conference', but which is sometimes used to refer to a secret society. It is often mutually interchangeable with terms like kongsi, a term generally used to mean 'corporation', or a Chinese clan. The Hokkien-derived term kongsi is more widely known in Southeast Asia, however, whereas in China, the secret societies were just simply known as hui.

The Lanfang Republic also known as Lanfang Company was a Chinese company federation and a tributary state of Qing China in Western Borneo. It was established by a Hakka Chinese named Low Lan Pak in 1777, until it was ended by Dutch occupation in 1884.

The Khoo Kongsi is a large Chinese clanhouse with elaborate and highly ornamented architecture, a mark of the dominant presence of the Chinese in Penang, Malaysia. The famous Khoo Kongsi is the grandest clan temple in the country. It is also one of the city's major historic attractions. The clan temple has retained its authentic historic setting, which includes an association building, a traditional theatre and the late 19th century rowhouses for clan members, all clustered around a granite-paved square. It is located in Cannon Square in the heart of the oldest part of the city of George Town, in the midst of narrow, winding lanes and quaint-looking pre-War houses exuding a palpable old world charm.

TheNgee Ann Kongsi is a charitable foundation located in Singapore and governed by the Ngee Ann Kongsi Ordinance of 1933. It is one of many Overseas Chinese Kongsi, or clan associations, that were set up by immigrants from China in the late 19th century.

Xiangcheng District, or Sin Kang District in Min Nan, is a district of Zhangzhou, Fujian province, People's Republic of China.

Khoo Thean Teik was one of the most powerful and notorious Hokkien leaders of 19th-century Penang. His name, "Thean Teik", means "Heavenly Virtue". He was the leader of the Tokong or Khian Teik society that was involved in the Penang Riots of 1867 and through its connection with the Hai San, the internecine Larut Wars of 1861 to 1874. He traded through the companies Khoon Ho and Chin Bee. He was a towkay, trading in immigrant labour and had interests in the Opium Farms in Penang and Hong Kong. Thean Teik Estate, a residential neighbourhood in Penang, and Jalan Thean Teik are named after him.

Kapitan Cina, also spelled Kapitan China or Capitan China was a high-ranking government position in the civil administration of colonial Indonesia, Malaysia, Singapore, Borneo and in the Philippines. Office holders exercised varying degrees of power and influence: from near-sovereign political and legal jurisdiction over local Chinese communities, to ceremonial precedence for community leaders. Corresponding posts existed for other ethnic groups, such as Kapitan Arab and Kapitan Keling for the local Arab and Indian communities respectively.

The Mandor rebellion in 1884 and 1885, also called the Third Kongsi War, was an uprising of ethnic Chinese, helped by the Dayaks, against the Dutch East Indies government.

Long Shan Tang Temple is a Hokkien Chinese clan temple located on Anawrahta Road in Latha Township, part of Yangon's Chinatown. It was founded by members of the Tseng and Khoo clans from Fujian province in 1877. This temple is dedicated for ancestral worship.

An ancestral shrine, hall or temple, also called lineage temple, is a temple dedicated to deified ancestors and progenitors of surname lineages or families in the Chinese tradition. Ancestral temples are closely linked to Confucian philosophy and culture and the emphasis that it places on filial piety.

A triad is a Chinese transnational organized crime syndicate based in Greater China and has outposts in various countries with significant overseas Chinese populations.

Chinese folk religion plays a dynamic role in the lives of the overseas Chinese who have settled in the countries of this geographic region, particularly Burmese Chinese, Singaporean Chinese, Malaysian Chinese, Thai Chinese and Hoa. The Indonesian Chinese, by contrast, were forced to adopt en masse either Buddhism or Christianity in the 1950s and 1960s, abandoning traditional worship, due to Indonesia's religious policies which forbade Chinese traditional religion. Some Chinese Filipinos also still practice some Chinese traditional religions, besides Christianity of either Roman Catholicism or Protestantism, of which some have also varyingly syncretized traditional Chinese religious practices with. Chinese folk religion, the ethnic religion of Han Chinese, "Shenism" was especially coined referring to its Southeast Asian expression; another Southeast Asian name for the religion is the Sanskrit expression Satya Dharma.

Eng Chuan Tong Tan Kongsi is a Hokkien clan house at Beach Street in George Town, Penang, Malaysia. It was founded in the early 19th century by a Tan family from the Fujian province of Zhangzhou in China. The building is a place of worship devoted to Kai Zhang Sheng Wang (開漳聖王) or Chen Yuanguang (陳元光), the founder of Zhangzhou, and his two deputies, Generals Fushun and Fusheng. It was also the ancestral temple of Tan clansmen for the purposes of cultural integration. Members of the Tan family worship their ancestor, Tan Guan Kong.

Hokkien architecture, also called Hoklo architecture or Minnan architecture, refers to the architectural style of the Hoklo people, the Han Chinese group who have historically been the dominant demographic of the Southern Chinese province of Fujian, Taiwan, and Singapore. This style shares many similarities with those of surrounding Han Chinese groups. There are, however, several features that are unique or mostly unique to Hoklo-made buildings, making many traditional buildings in Hokkien and Taiwan visually distinctive from those outside the region.