The Kultur Lige (Culture League) was a secular socialist Jewish organization established in Kiev in 1918, whose aim was to promote Yiddish language literature, theater and culture. [1] The league organized various activities, including theater performances, poetry recitals, and concerts in Yiddish with the aim of disseminating Jewish art in Eastern Europe and Russia. Among some notable members of the organization were the scenic designer Boris Aronson (who later worked on Broadway), [2] the artist and architect El Lissitzky, [2] the writer David Bergelson, [3] the sculptor Joseph Chaikov, the writer Peretz Markish, [4] the poet David Hofstein, [5] and artist Issachar Ber Ryback. [2] Bergelson, Markish and Hofstein were later executed on Joseph Stalin's orders during the Night of the Murdered Poets, in 1952.

Artists like Ryback and Lissitzky who were members of the group tried to develop a distinctively Jewish form of modernism in which abstract forms would be used as a means of expressing and disseminating popular culture. [2]

The manifesto of the group, published in November 1919, stated:

"The goal of the Kulturlige is to assist in creating a new Yiddish secular culture in the Yiddish language, in Jewish national forms, with the living forces of the broad Jewish masses, in the spirit of the working man and in harmony with their ideals of the future." [6]

It also listed the "three pillars" of the Kultur Lige as Yiddish education for the people, Yiddish literature, and Jewish art. [7]

In 1919 members of the group, Victor Alter and Henryk Berlewi, organized a major exhibition of Polish-Jewish art in Białystok under the name "First Exhibition of Jewish Painting and Sculpture". The exhibition was targeted at the Yiddish speaking Jewish community, as well as the Polish workers of the city. During the same year, the organization helped to sponsor sixty three Yiddish schools, fifty four libraries and many other cultural and educational institutions. [8]

In 1920 the Kiev branch of the organization was taken over by the Bolsheviks and the Jewish section of the Soviet Communist party, Yevsektsiya, and subjected to the bureaucracy of the Soviet state. [6] Its printing presses were taken away, it was denied paper for publishing and its central committee was forcefully disbanded. [6] As a result, the Warsaw branch became the main center for the organization. [1]

Afterward, the remains of the Kultur Lige in the Soviet Union continued under the auspices of the Yevsektsiya as a publishing house, mostly focusing on Yiddish textbooks for children. In Poland, the League established offices in other cities such as Wilno and Łódź. In 1924, it began to issue the Literarishe Bleter  [ he ] magazine (based on the Polish Wiadomości Literackie  [ pl ]) (Literary News), which became the main forum for discussions by the Yiddish intelligentsia on subjects of art, literature and theater. [8] 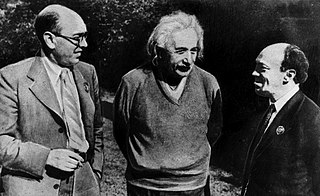 Solomon (Shloyme) Mikhoels was a Soviet Jewish actor and the artistic director of the Moscow State Jewish Theater. Mikhoels served as the chairman of the Jewish Anti-Fascist Committee during World War II. However, as Joseph Stalin pursued an increasingly anti-Semitic line after the War, Mikhoels's position as a leader of the Jewish community led to increasing persecution from the Soviet state. He was assassinated in Minsk in 1948 by order of Stalin.

A Yevsektsiya was a Jewish section of the Soviet Communist Party. These sections were established in fall of 1918 with consent of Vladimir Lenin to carry communist revolution to the Jewish masses. The Yevsektsiya published a Yiddish periodical, der Emes.

The Jewish Anti-Fascist Committee, abbreviated as JAC, was an organization that was created in the Soviet Union during World War II to influence international public opinion and organize political and material support for the Soviet fight against Nazi Germany, particularly from the West. It was organized by the Jewish Bund leaders Henryk Erlich and Victor Alter, upon an initiative of Soviet authorities, in fall 1941; both were released from prison in connection with their participation. Following their re-arrest, in December 1941, the Committee was reformed on Joseph Stalin's order in Kuibyshev in April 1942 with the official support of the Soviet authorities. In 1952, as part of the persecution of Jews in the last year part of Stalin's rule, most prominent members of the JAC were arrested on trumped-up spying charges, tortured, tried in secret proceedings, and executed in the basement of Lubyanka Prison. Stalin and elements of the KGB were worried about their influence and connections with the West. They were officially rehabilitated in 1988.

The Moscow State Jewish (Yiddish) Theatre, also known by its acronym GOSET (ГОСЕТ), was a Yiddish theatre company established in 1919 and shut down in 1948 by the Soviet authorities. During its time in operation, it served as a prominent expression of Jewish culture in Russia under Joseph Stalin. Under its founding artistic director, Alexander Granowsky, productions were heavily influenced by the avant-garde trends of Europe and many reflected an expressionistic style. Summertime tours to rural shtetls were extremely popular. At the end of a 1928 tour in Germany, Granowsky defected to the west, and Solomon Mikhoels became artistic director in his place. During Mikhoels' tenure the theatre branched out beyond classic Yiddish theatre productions to include works by Soviet Yiddish writers and William Shakespeare. The theatre continued to operate during World War II in Moscow and, after the evacuation of the city in 1943, in Tashkent. Mikhoels was murdered by the MVD in 1948 and his successor, Benjamin Zuskin, was arrested shortly after. In 1948 the Soviet authorities ordered the theatre to be shut down along with all other Yiddish theatre companies in the Soviet Union.

DavidBergelson was a Yiddish language writer born in the Russian Empire. He lived for a time in Berlin, Germany before moving to the Soviet Union following the Nazi rise to power in Germany. He was a victim of the post-war antisemitic "rootless cosmopolitan" campaign and one of those executed on the Night of the Murdered Poets.

Peretz Davidovich Markish was a Russian Jewish poet and playwright who wrote predominantly in Yiddish.

Der Nister was the pseudonym of Pinchus Kahanovich, a Yiddish author, philosopher, translator, and critic. 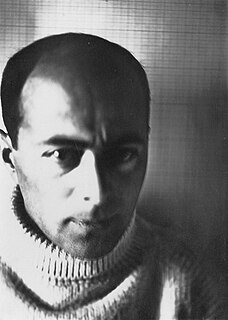 Lazar Markovich Lissitzky, known as El Lissitzky, was a Russian artist, designer, photographer, typographer, polemicist, and architect. He was an important figure of the Russian avant-garde, helping develop suprematism with his mentor, Kazimir Malevich, and designing numerous exhibition displays and propaganda works for the Soviet Union. His work greatly influenced the Bauhaus and constructivist movements, and he experimented with production techniques and stylistic devices that would go on to dominate 20th-century graphic design.

David Hofstein was a Yiddish poet. 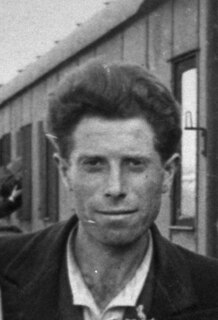 Felix Samoilovich Lembersky was a Russian/Soviet painter, artist, teacher, theater stage designer and an organizer of artistic groups. A refugee of World War I, he grew up in Berdyczów and studied art in Kiev and Leningrad—at the Jewish Arts and Trades School, known as Kultur-Lige (1928–29), the Kiev Art Institute (1933–34) and the Leningrad Academy of Art (1935–41). He graduated with high honors, completing his thesis during the Siege of Leningrad. He was wounded in the defense of Leningrad during World War II. His parents perished in Holocaust in Ukraine. After evacuation in 1942, Lembersky spent two years working in the Urals, recording industrial war effort. After the war, Lembersky joined the Leningrad Union of Artists. He exhibited widely in national and privately organized art shows in Russia and his work was acquired by museums and private collectors. While living in Leningrad, he also toured and worked in the Urals, Ladoga, Pskov and Baltic Republics. Much of his art is inspired by the Eastern Europe of his childhood—Ukraine and Ukraine. Among his most moving images are the portraits of his fellow citizens and the places where he lived and visited.

The Holocaust in Russia is the Nazi crimes during the occupation of Russia by Nazi Germany.

Milgroim. Journal for Art and Literature was a Yiddish cultural magazine that was published between 1922 and 1924 in Berlin by Rimon. At the same time, the same publisher published the Hebrew-language magazine Rimon in a similar format. Milgroim and rimon means pomegranate in Yiddish and Hebrew.