The Lancashire County Board of the Gaelic Athletic Association (GAA) (Irish : Cumann Lúthchleas Gael Coiste Lancasír), or Lancashire GAA, is one of the county boards outside Ireland and is responsible for the running of Gaelic games in the North West of England and on the Isle of Man. With Scotland, Warwickshire, Gloucestershire, Hertfordshire, London and Yorkshire, the board makes up the British Provincial Board. The Lancashire board oversees the Lancashire Junior Championship, the Lancashire Junior League, and the first and second division of the Pennine League. [1]

The County crest depicts the Celtic cross and shamrock, the red rose of Lancashire and a ship representing the voyage taken by all of those who have left Ireland to make Lancashire their home or the place they are passing through. The crest was designed by former County Secretary Seán Hackett in 2007.

In recent years the county has lost two clubs: St. Ann's, Manchester and St.Patricks, Chester. Ellan Vannin Gaels in the Isle of Mann have begun underage after stopping playing adult football in three years. There are eight affiliated clubs, the majority of which are based in Manchester and Liverpool. As of 2019, the clubs participating were:

Player of the Year: Craig Owen

The first match recorded in Liverpool was in 1901, where Liverpool Young Ireland's defeated Manchester Martyrs. According to Tommy Walsh there were 300 in attendance including the Special Branch, who were no doubt keeping a watchful eye. By 1906, both hurling and camogie were played in Liverpool and were played in the Aintree area, where the famous racecourse is located now. Later, the Young Irelands changed their name to Eire Og and then to St.Patricks by 1940.

Today, if you had the finest of Liverpool up against the finest of Kilkenny on a hurling field; there would be only one outcome. In 1912 however, the two teams met in the All-Ireland Senior Hurling Championship Semi-Final. The Cats won by 4-03 to 1-03, the game was played in Liverpool however unfortunately the exact location was not recorded and no one in the county board was about in that time to clarify things!

By 1924 a new GAA ground was used at Dingle Brook Farm in West Derby. Two years later, the Provincial Council was formed and the only two affiliated boards were London and Liverpool GAA. The two boards fielded teams annually, in both hurling and football, to play each other for the P.J. O'Connor and Sam Maguire cups respectively. The hurling matches were normally won by Liverpool, while the football games were typically won by the London team.

By 1926, the Liverpool County Board (formed before the Lancashire County Board), secured a pitch at Thingwall Road in Broadgreen. They were warned that if there were any fighting during games then they would lose the pitch! The following year the teams who were playing around Liverpool were as follows:

By 1927, the Secretary's report stated that there were five hurling, two football and two camogie clubs affiliated. Eleven years later, the teams in Lancashire were:

During World War 2, the GAA in Lancashire had its ups and downs, one of the pluses was a new club being formed in Wigan.

Between 1948 and 1950, John Mitchels GAC was formed, however according to Tommy Walsh, they didn't succeed in attracting the young Irish men into their ranks. They dissolved into the St.Patrick's Club, St.Patrick's hurling and John Mitchel's Gaelic football. Peter Delaney was one of the founders of the John Mitchels club and he became secretary of the larger club. By 1953, games were played at Yew Tree Field, Preston were playing Gaelic games and Lancashire got to the All-Ireland Junior Final, losing to Cork. Two years later, Gaelic games were being played at Thingwall Hall (St.Edward's Orphanage) and after that at Sefton Rugby Club, West Derby.

There were many great players to grace the John Mitchels team over the years, however none more so than the great James McCartan snr and his brother Dan, as well as a smattering of Derry county players. The reason for this was during the Gaelic exhibition games at Wembley, John Mitchels took part in the festivities against London Shamrocks as a feeder for the bigger inter-county games. Of course making the long trip south resulted in not bring a full 15, so the aforementioned players togged out for the Liverpool team.

By the 1970s and 80s the economic situation was improving in Ireland, therefore the influx of Irish playing Gaelic games in Britain was declining. By 1978 there were 40 underage games played at Newsham Park. A very strong group of families were active. Sadly, the 1980s saw hurling die in Liverpool as well as the underage. On the plus side however, 1982 saw comprehensive fixtures being first produced, thanks to Peter Gallagher.

John Mitchels adult team soon began to find it hard to field but thanks to Barry Morris, who also played with the club, reformed the club and affiliated it to the Lancashire County Board. The club of course, reached Croke Park to play in the All-Ireland Junior Final in 2009. [11]

Lancashire competed in the Lory Meagher Cup (Tier 5 of the All-Ireland Senior Hurling Championship) for the first time in 2015.

2018 was their inaugural appearance in the national hurling league. They won the Allianz Hurling League Division 3B title at the first attempt.

There are seven pitches in Lancashire:

Two clubs from outside Lancashire play in Lancashire competitions also:

Seán O'Neill is a former Irish sportsperson. He played Gaelic football with his local club John Mitchel and was a member of the Down senior inter-county team from the 1950s until the 1960s. O'Neill is one of only four Down players to win three All-Ireland titles.

St Brendan's Park is a GAA stadium in Birr, County Offaly, Ireland. It is one of the main grounds of Offaly's Gaelic football and hurling teams. The ground has a capacity of 5,500. Prior to the development of O'Connor Park in Tullamore, the ground was the base of Offaly hurling and played host to intercounty competitions and to the Offaly hurling county final. Most Offaly games have since transferred to Tullamore.

Connacht GAA or formally the Connacht Provincial Council of the Gaelic Athletic Association is the governing body for Gaelic games that are played in the province of Connacht, Ireland. It performs a supervisory and appeal role for the five County Boards within the province. Anomalously, it also exercises its functions for an additional two County Boards that are not located in the province: London GAA and New York GAA. Teams from these administrative areas play in the Connacht Senior Football Championship.

The Ulster Council is a Provincial council of the Gaelic Athletic Association sports of hurling, Gaelic football, camogie, and handball in the province of Ulster. The headquarters of the Ulster GAA is based in Armagh City.

Confey GAA is a Gaelic Athletic Association (GAA) club based in Leixlip, County Kildare, Ireland and won Kildare's Club of the Year award in 2004.

The Ulster Senior Football Championship is a GAA inter-county competition for gaelic football teams in the Irish province of Ulster. It is organised by the Ulster Council and begins in early May. The final is usually played on the third Sunday in July.

Austin Stacks is a hurling and Gaelic football club based in Tralee in County Kerry, Ireland. 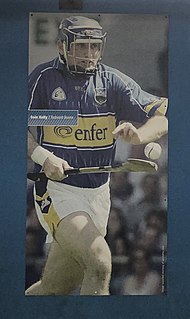 Eoin Kelly is an Irish hurler who played as a right corner-forward for the Tipperary senior team. 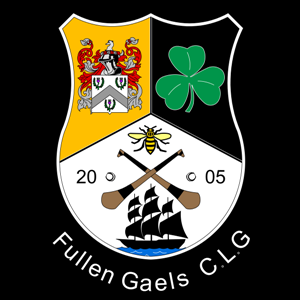 Fullen Gaels Hurling and Camogie Club is a Gaelic Athletic Association club based in Manchester, England. Although affiliated to Lancashire GAA it mainly competes in Warwickshire GAA competitions.

Brendan Cummins is an Irish hurler who played as a goalkeeper for the Tipperary senior team.

Na Piarsaigh are a Hurling and Gaelic football club based in the north side of Cork City, Ireland.

Billy Fitzpatrick is an Irish former sportsperson. He played hurling with his local club the Fenians and was a member of the Kilkenny senior inter-county team from 1974 until 1986. Fitzpatrick captained Kilkenny to the All-Ireland title in 1975.

John Mitchel's Hurling and Camogie Club is a Gaelic Athletic Association club based in Birmingham, England, and is the oldest club in the Warwickshire GAA. It has been long one of the leading Warwickshire clubs in hurling, competing in the county Senior Championship, and in camogie, competing at Junior level. There is an associated Gaelic football club. The club is named after John Mitchel, the 19th-century Irish revolutionary.

Fulham Irish GAA Club is a Gaelic Football and Hurling Club based in London. They play at Wormwood Scrubs, the open space located near to the famous prison.

Seir Kieran is a Gaelic Athletic Association club located in a parish and Electoral Division of the same name. Seir Kieran takes its name from Saint Ciarán of Saighir, who founded the parish as a civitas in the 5th century. The club's playing facilities are based in the village of Clareen in County Offaly in Ireland.

Anthony Gleeson was a dual player from Tralee, County Kerry. He played at full back for most of his career. Gleeson was unlucky not to have won any senior honors with Kerry, he missed out on the Munster Championship win in 1991 and despite playing in the first round in 1996 did not play another game and therefore did not receive a Munster medal. He did win a Munster Under 21 Championship in 1988. He also played underage hurling with Kerry in the late 80's, he was captain of the team in 1987 when they won the Leinster Minor B Championship. He gave up hurling at a young age to focus on football. He also played with the Kerry Vocational Schools team in the late 80's winning 2 All-Ireland Vocational Schools Championships in 1986 and 1987.