Law Society of England and Wales

The Law Society of England and Wales (officially The Law Society) is the professional association that represents and governs solicitors for the jurisdiction of England and Wales. It provides services and support to practising and training solicitors, as well as serving as a sounding board for law reform. Members of the Society are often consulted when important issues are being debated in Parliament or by the executive. The Society was formed in 1825.

The Hall of The Law Society is in Chancery Lane, London, but it also has offices in Cardiff to deal with the Wales jurisdiction and the Senedd, and Brussels, to deal with European Union law.

Barristers in England and Wales have a similar professional body, the General Council of the Bar, commonly known as the Bar Council.

The London Law Institution, the predecessor to the Law Society, was founded in 1823 when many London Solicitors came together to raise the reputation of the profession by setting standards and ensuring good practice. 'London' was dropped from the title in 1825 to reflect the fact that the Law Institution had national aspirations.

In July 2013, the Association of Women Solicitors (AWS), a national organisation working with and representing women solicitors in the United Kingdom, merged with the Law Society to form its Women Lawyers Division. Although merged, the AWS will operate separately from the Law Society. [4]

In 1834, the Society first initiated proceedings against dishonest practitioners. By 1907, the Society possessed a statutory disciplinary committee, and was empowered to investigate solicitors' accounts and to issue annual practising certificates. In 1983, the Society established the Office for the Supervision of Solicitors to deal with complaints about solicitors. Complaints regarding the conduct of solicitors are now dealt with by the Solicitors Regulation Authority (SRA). However complaints regarding poor service are the remit of the Legal Ombudsman. [5]

The Solicitors Act 1860 enabled the Society to create a three-tier examination system. [3] In 1903, the Society established its own Law Society School of Law, which later merged with tutorial firm Gibson and Weldon to become the independent College of Law. By 1922 The Law Society required a compulsory academic year for all clerks.

Following the recommendations of the Clementi Review The Law Society split its representative and regulatory functions.

Complaints from the public are handled by the Legal Ombudsman which is a single portal for complaints by the public made against all providers of legal services including the Bar, licensed conveyancers etc., but excluding unqualified will-writers.

The regulatory body for solicitors is the Solicitors Regulation Authority. It is a Board of The Law Society although it regulates and enforces regulation completely independently of the Law Society. The Law Society remains the approved regulator, although following the Legal Services Act 2007 a new body, the Legal Services Board (chaired by Sir Michael Pitt, a government appointee) oversees all the approved regulators including the Bar Council, which has also divested its regulatory functions into the Bar Standards Board.

The Law Society of England and Wales is a Designated Professional Body under the Financial Services & Markets Act 2000.

The Hall of The Law Society

Located at 113 Chancery Lane The Hall of The Law Society is the principal building of the society. Built in 1832 the building is Grade II* listed. The architect was Lewis Vulliamy. An extension in 1902-04 was designed by Charles Holden. [6] In addition to offices for its staff the building is used for Law Society conferences and events [7] and parts of the building are available on a private hire basis for events. [8]

The "Standard Conditions of Sale" are issued by the Law Society to provide a standard set of rules and expectations for the sale and purchase of residential property in England and Wales. As a contractual instrument they are intended "to create legal rights and legal obligations" on the part of both parties to a transaction. [60] The fifth (current) edition was initially published in 2011, [61] and was revised in 2018. [60] The majority of residential property sales are subject to these conditions. [62] 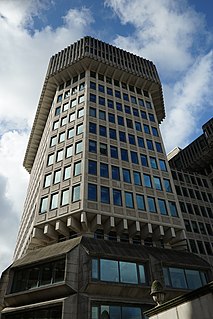 Her Majesty's Advocate, known as the Lord Advocate, is the chief legal officer of the Scottish Government and the Crown in Scotland for both civil and criminal matters that fall within the devolved powers of the Scottish Parliament. They are the chief public prosecutor for Scotland and all prosecutions on indictment are conducted by the Crown Office and Procurator Fiscal Service, nominally in the Lord Advocate's name.

Her Majesty's Solicitor General for Scotland is one of the Law Officers of the Crown, and the deputy of the Lord Advocate, whose duty is to advise the Scottish Government on Scots Law. They are also responsible for the Crown Office and Procurator Fiscal Service which together constitute the Criminal Prosecution Service in Scotland.

This is a list of sheriffs and high sheriffs of Shropshire

Solicitors Journal is a monthly legal journal published in the United Kingdom by the International In-house Counsel Journal, Cambridge. It was established in 1856 and covers "practical and independent updates and analysis about the latest developments affecting the legal profession." The magazine has its headquarters in Cambridge.

The Attorney-General of Barbados is the primary legal advisor to the Government of Barbados.

The 1945 New Year Honours were appointments by many of the Commonwealth realms of King George VI to various orders and honours to reward and highlight good works by citizens of those countries. They were announced on 1 January 1945 for the British Empire, Canada, and the Union of South Africa to celebrate the past year and mark the beginning of 1945.

The Queen's Birthday Honours 1899 were announced on 3 June 1899 in celebration of the birthday of Queen Victoria. The list included appointments to various orders and honours of the United Kingdom and British India.

The 1894 Birthday Honours were appointments by Queen Victoria to various orders and honours to reward and highlight good works by citizens of the British Empire. The appointments were made to celebrate the official birthday of The Queen, and were published in the London Gazette on 25 May 1894. and in The Times on 26 May 1894.

Gibson and Weldon was a law practice at 27 Chancery Lane in London and the name of its tutorial firm which from 1876 until 1962 prepared hundreds of thousands of future solicitors and barristers in England and Wales for their examinations. Gibson and Weldon also published the monthly journal Law Notes and a series of legal textbooks from adjacent offices at 25–26 Chancery Lane. The firm's principals were Albert Gibson (1852–1921) and Arthur William Weldon (1856–1943). After the death of Arthur Weldon the tutorial firm continued until 1962 when it was merged with the Law Society's own law school to form the College of Law.