The Legion of Merit (LOM) is a military award of the United States Armed Forces that is given for exceptionally meritorious conduct in the performance of outstanding services and achievements. The decoration is issued to members of the eight uniformed services of the United States [5] as well as to military and political figures of foreign governments.

The Legion of Merit (Commander degree) is one of only two United States military decorations to be issued as a neck order (the other being the Medal of Honor), and the only United States military decoration that may be issued in degrees (much like an order of chivalry or certain Orders of Merit), although the degrees including a neck ribbon are only awarded to non-U.S. nationals. [6] [7]

The Legion of Merit is seventh in the order of precedence of all U.S. military awards and is worn after the Defense Superior Service Medal and before the Distinguished Flying Cross. [8] In contemporary use in the U.S. Armed Forces, the Legion of Merit is typically awarded to Army, Marine Corps, Air Force, and Space Force general officers and colonels, and Navy and Coast Guard flag officers and captains occupying senior command or very senior staff positions in their respective services. It may also be awarded to officers of lesser rank, senior warrant officers (typically in command positions at the rank of chief warrant officer 5), and to very senior enlisted personnel (typically in the rank of command sergeant major and sergeant major of the Army in the Army, fleet master chief petty officer and master chief petty officer of the Navy in the Navy, command chief master sergeant and chief master sergeant of the Air Force in the Air Force, command chief master sergeant and senior enlisted advisor of the Space Force in the Space Force, and sergeant major of the Marine Corps in the Marine Corps), but these instances are less frequent, typically by exception, and the circumstances vary by branch of service.

Authority to award the Legion of Merit is reserved for general officers and flag officers in pay grade O-9 (e.g. lieutenant general and vice admiral) and above, civilian Department of Defense personnel at assistant service secretary or Assistant Secretary of Defense level and above, or equivalent secretary-level civilian personnel with the Department of Homeland Security with direct oversight of the U.S. Coast Guard.

The degrees of Chief Commander, Commander, Officer, and Legionnaire are awarded only to members of armed forces of foreign nations under the criteria outlined in Army Regulation 672-7 and is based on the relative rank or position of the recipient as follows: [9]

When the Legion of Merit is awarded to members of the uniformed services of the United States, it is awarded without reference to degree. The criteria are "for exceptionally meritorious conduct in the performance of outstanding services and achievements" and is typically reserved for senior officers at O-6 level and above, typically in connection with senior leadership/command positions or other senior positions of significant responsibility.

The degrees and the design of the decoration were influenced by the French Legion of Honour (Légion d'honneur). [11]

Although recommendations for creation of a medal for meritorious service were initiated as early as September 1937, no formal action was taken toward approval.

In a letter to the Quartermaster General (QMG) dated December 24, 1941, the Adjutant General formally requested action be initiated to create a meritorious service medal, and provide designs in the event the decoration was established. Proposed designs prepared by Bailey, Banks, and Biddle, and the Office of the Quartermaster General were provided to the Assistant Chief of Staff for Personnel (Colonel Heard) by the QMG on January 5, 1942.

The Assistant Chief of Staff (G-1), Brigadier General John H. Hilldring, in a response to the QMG on April 3, 1942, indicated the Secretary of War had approved the design recommended by the QMG. The design of the Legion of Merit (change of name) would be ready for issue immediately after legislation authorizing it was enacted into law. (A separate medal called the Meritorious Service Medal was established in 1969.)

An act of Congress (Public Law 671, 77th Congress, Chapter 508, 2d Session) on July 20, 1942, established the Legion of Merit and provided that the medal "shall have suitable appurtenances and devices and not more than four degrees, and which the President, under such rules and regulations as he shall prescribe, may award to

(a) personnel of the Armed Forces of the United States and of the Government of the Commonwealth Philippines and
(b) personnel of the armed forces of friendly foreign nations who, since the proclamation of an emergency by the President on 1939-09-08, shall have distinguished themselves by exceptionally meritorious conduct in the performance of outstanding services."

The medal was announced in War Department Bulletin No. 40, dated August 5, 1942. Executive Order 9260, dated October 29, 1942, by President Franklin D. Roosevelt, established the rules for the Legion of Merit, and required the President's approval for the award.

Following the invasion of North Africa in November 1942, a number of United States officers were awarded the Legion of Merit in the degree of Officer. One of the recipients was future Chairman of the Joint Chiefs of Staff Lyman Lemnitzer. Soon after, regulations for the award of the Legion of Merit were revised so that it would not be awarded in the degrees above Legionnaire to United States military personnel.

General Dwight D. Eisenhower was presented the Legion of Merit by President Roosevelt while he was en route to the Tehran Conference, in Cairo, Egypt, on November 26, 1943. [14] [15]

In 1943, at the request of the Army Chief of Staff, General George C. Marshall, approval authority for U.S. personnel was delegated to the Department of War. Executive Order 10600, dated March 15, 1955, by President Dwight D. Eisenhower, again revised approval authority. Current provisions are contained in Title 10, United States Code 1121. As a result, awarding authority for the Legion of Merit resides with general officers/flag officers at the Lieutenant General / Vice Admiral level or higher.

The U.S. Navy, Marine Corps, and Coast Guard, unlike the Army and later the Air Force, provided for the Legion of Merit to be awarded with a "V" device indicating awards for participation in combat operations.

After the establishment of the Bronze Star Medal (BSM) in February 1944, the Legion of Merit was awarded almost exclusively to senior officers in the rank of lieutenant colonel (Army, Marine Corps and Air Force) or commander (Navy and Coast Guard) (O-5), and above. Beginning in the 1980s, the Legion of Merit began to be awarded more frequently to senior-ranking warrant officers (W-4 and W-5), as well as to senior enlisted service members (E-8 and E-9), usually as a retirement award. When not awarded as a retirement award, it is most commonly awarded to officers in pay grade O-6 and higher.

The Meritorious Service Medal (MSM) was established in 1969 as a "junior" version of the Legion of Merit and prior to 2003 was only awarded for non-combat service. The MSM is awarded more frequently, and to more lower-ranking military personnel, than the Legion of Merit. Recipients of the MSM are usually in pay grades E-7 thru E-9, W-3 thru W-5 (Army Only), and O-4 thru O-6 for the Army, Air Force, and Space Force; for the Navy, Marine Corps, and Coast Guard the MSM is usually presented to those in pay grades E-9, W-4, W-5, O-5 and O-6.

The ribbon for all of the decorations is 1+3⁄8 inches (35 mm) wide and consists of the following stripes: 1⁄16 inch (1.6 mm) white; center 1+1⁄4 inches (32 mm) crimson; and 1⁄16 inch (1.6 mm) white. The reverse of all of the medals has the motto taken from the Great Seal of the United States, "ANNUIT COEPTIS" ("He [God] has favored our undertakings") and the date "MDCCLXXXII" (1782), which is the date of America's first decoration, the Badge of Military Merit, now known as the Purple Heart. The ribbon design also follows the pattern of the Purple Heart ribbon.

A few recipients are listed above.

For a more comprehensive list, see Recipients of the Legion of Merit. 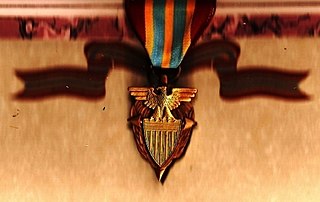 The Superior Civilian Service Award is the second highest award of the Department of the Army Honorary Awards for Department of the Army Employees. It consists of a medal, lapel pin and certificate. It is granted by Commanders of ACOMs, ASCCs, and DRUs; members of the SES serving as the director of a DRU; and the AASA for HQDA. May be further delegated to commanders MG and above or civilian equivalent and to Principal Officials of HQDA. The medal is the civil service equivalent of the military Legion of Merit. Originally established on 26 January 1959 as the Meritorious Civilian Service Award, the name of the award was changed to its current name in November 2014.

The Military Merit Medal is a military decoration of the Armed Forces of the Philippines. The medal is awarded for heroic achievement or meritorious service during, or in support of military action against an enemy.

The system of Orders, decorations, and medals of South Vietnam came into being with the establishment of the National Order of Vietnam in 1950. Established by Bảo Đại, the head of state of the State of Vietnam, the order was the highest award of the state for both civilians and military personnel. This level of precedence continued under the government of South Vietnam. Lower ranking awards for both the military and civilians were subsequently established. The systems of civilian and military awards had their own order of precedence.

The Legion of Merit is a decoration of the United States of America and is awarded to foreign military personnel in four grades and to U.S. military personnel without distinction of degree. The following are notable recipients within the award.