The Southwestern United States, also known as the American Southwest, Desert Southwest, or simply the Southwest, is the informal name for a region of the western United States. Definitions of the region's boundaries vary a great deal and have never been standardized, though many boundaries have been proposed. For example, one definition includes the stretch from the Mojave Desert in California to Carlsbad, New Mexico, and from the Mexico–United States border to the southern areas of Colorado, Utah, and Nevada. The largest metropolitan areas are centered around Phoenix, Las Vegas, Tucson, Albuquerque, and El Paso. Those five metropolitan areas have an estimated total population of more than 9.6 million as of 2017, with nearly 60 percent of them living in the two Arizona cities—Phoenix and Tucson.

Trost & Trost Architects & Engineers, often known as Trost & Trost, was an architecture firm based in El Paso, Texas. The firm's chief designer was Henry Charles Trost, who was born in Toledo, Ohio, in 1860. Trost moved from Chicago to Tucson, Arizona in 1899 and to El Paso in 1903. He partnered with Robert Rust to form Trost & Rust. Rust died in 1905 and later that year Trost formed the firm of Trost & Trost with his twin brother Gustavus Adolphus Trost, also an architect, who had joined the firm as a structural engineer. Between 1903 and Henry Trost's death on September 19, 1933, the firm designed hundreds of buildings in the El Paso area and in other Southwestern cities, including Albuquerque, Phoenix, Tucson, and San Angelo.

Warren Brooks Woodson was an American football, basketball, and baseball coach and college athletics administrator. He served as the head football coach at Arkansas State Teachers College, now the University of Central Arkansas, (1935–1940), Hardin–Simmons University (1941–1951), the University of Arizona (1952–1956), New Mexico State University (1958–1967), and Trinity University in San Antonio, Texas (1972–1973), compiling a career college football record of 203–94–14 in 31 seasons. He was also the head basketball coach at Arkansas State Teachers from 1935 to 1941 and at Hardin–Simmons in 1945–46, tallying a career college basketball mark of 116–50. Woodson won an additional 52 football games at junior college level and 18 high school football games. He was inducted to the College Football Hall of Fame in 1989.

The Arizona–Texas League was a low-level circuit in American minor league baseball that existed for nine seasons, from 1931–32, 1937–41, 1947–50 and 1952-54. In 1951, the Arizona-Texas loop merged with the Sunset League to form the Southwest International League. However, the Arizona and Texas clubs played only that one season (1951) in the new circuit before seceding and reforming the A-TL in 1952. From 1928 to 1930, it was known as the Arizona State League.

The UTEP Miners football program represents University of Texas at El Paso (UTEP) in the sport of American football. The Miners compete in the Football Bowl Subdivision (FBS) of the National Collegiate Athletic Association (NCAA) and the West Division of Conference USA (CUSA). They are currently coached by Dana Dimel. UTEP has produced a Border Conference championship team in 1956 and a Western Athletic Conference championship team in 2000, along with 14 postseason bowl appearances. The Miners play their home games at the Sun Bowl which has a seating capacity of 51,500.

Foster Haven Rockwell was an All-American football player and hotelier. A native of Vermont, Rockwell played football at Yale University and was selected as the quarterback on the 1902 College Football All-America Team and was a member of Skull and Bones. He later served the head football coach at Yale in 1906, leading the team to a national championship. He also coached football at the United States Naval Academy. In 1911, Rockwell moved to Arizona where he owned and operated the Hotel Adams in Phoenix for more than 20 years. He was also the founder of the Arizona Hotel Association. Rockwell died in Phoenix at age 61 in 1942. 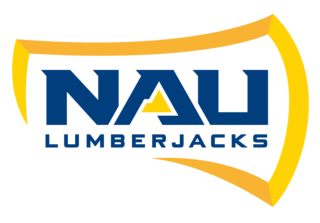 The Northern Arizona Lumberjacks football program is the intercollegiate American football team for the Northern Arizona University located in the U.S. state of Arizona. The team competes in the NCAA Division I Football Championship Subdivision (FCS) and are members of the Big Sky Conference. The school's first football team was fielded in 1915. The team plays its home games at the 17,500 seat Walkup Skydome. They are coached by Chris Ball.

The 2015 Arizona Wildcats football team represented the University of Arizona in the 2015 NCAA Division I FBS football season. It marked the Wildcats's 116th overall season, 38th as a member of the Pac-12 Conference and its 5th within the Pac-12 South Division. The team was led by head coach Rich Rodriguez, in his fourth year, and played its home games at Arizona Stadium in Tucson, AZ for the 87th straight year. They finished the season 7–6, 3–6 in Pac-12 play to finish in fifth place in the South Division. They were invited to the New Mexico Bowl where they defeated New Mexico. 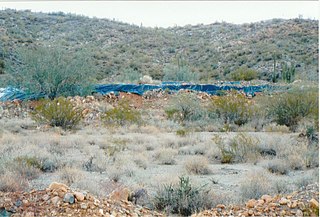 Gillett, Arizona, is a ghost town in Yavapai County, Arizona, United States. It has an estimated elevation of 1,362 feet (415 m) above sea level. Historically, it was a stagecoach station, and then a settlement formed around an ore mill serving the Tip Top Mine, on the Agua Fria River in Yavapai County in what was then Arizona Territory. It was named for the mining developer of the Tip Top Mine, Dan B. Gillett and is spelled incorrectly as Gillette on U. S. Topographic Maps and elsewhere.

The 1900 Arizona football team was an American football team that represented the University of Arizona as an independent during the 1900 college football season. The team did not play any intercollegiate games, compiled a 3–1 record, shut out three of four opponents, and outscored all opponents, 131 to 6. The team's victories came in games against the Tucson Indian School and a Tucson town team. The loss came against the Phoenix Indian School.

The 1901 Arizona football team was an American football team that represented the University of Arizona as an independent during the 1901 college football season. In their second and final season under head coach William W. Skinner, the team compiled a 4–1 record and outscored their opponents, 115 to 19. All five games were played against the Tucson and Phoenix Indian Schools. The team captain was Leslie Gillett.

The 1902 Arizona football team was an American football team that represented the University of Arizona as an independent during the 1902 college football season. In its first and only season under head coach Leslie Gillett, the team compiled a 5–0 record, did not allow a point to be scored against it, and outscored opponents by a total of 134 to 0. In the second meeting in the Arizona–Arizona State football rivalry, Arizona defeated the Tempe Normal School, 12 to 0. The team captain was Bard L. Cosgrove.

Trinidad Swilling Shumaker, known as "The Mother of Phoenix" was a Phoenix pioneer and the wife of Jack Swilling, the founder of Phoenix. Mrs. Swilling was involved in local civic activities and promoted the public recognition of her husband as founder of Phoenix. She was also involved in dispute which made the local news as to who was the first White woman to settle in the Phoenix townsite. In 1868, Mrs. Swilling founded the first pioneer home in the Salt River Valley.

The 1955 New Mexico Lobos football team represented the University of New Mexico in the Skyline Conference during the 1955 college football season. In their third and final season under head coach Bob Titchenal, the Lobos compiled a 2–8 record, finished seventh in the conference, were shutout in five games, and were outscored by all opponents by a total of 213 to 61.

The 1930 New Mexico Lobos football team represented the University of New Mexico as an independent during the 1930 college football season. In their 11th and final season under head coach Roy W. Johnson, the Lobos compiled a 4–5 record. Alfred Seery was the team captain. Tom Churchill was the assistant coach, and Jack McFarland was the freshman coach.

The 1941 New Mexico Lobos football team represented the University of New Mexico in the Border Conference during the 1941 college football season. In their fifth and final season under head coach Ted Shipkey, the Lobos compiled a 5–4–1 record, finished fifth in the conference, and were outscored by opponents by a total of 135 to 116.