Last updated December 16, 2022
This is a dynamic list and may never be able to satisfy particular standards for completeness. You can help by adding missing items with reliable sources.

This is a list of lesbian filmmakers. The names listed include directors, producers, and screenwriters of feature films, television movies, documentaries and short films; and have received coverage or been recognized in reliable, authoritative media and academic sources. [1] [2] [3] [4] [5] [6]

"New Queer Cinema" is a term first coined by the academic B. Ruby Rich in Sight & Sound magazine in 1992 to define and describe a movement in queer-themed independent filmmaking in the early 1990s.

Barbara Jean Hammer was an American feminist film director, producer, writer, and cinematographer. She is known for being one of the pioneers of the lesbian film genre, and her career spanned over 50 years. Hammer is known for having created experimental films dealing with women's issues such as gender roles, lesbian relationships, coping with aging, and family life. She resided in New York City and Kerhonkson, New York, and taught each summer at the European Graduate School.

Monika Treut is a German filmmaker. She made her feature film debut with Seduction: The Cruel Woman, a film that explores sadomasochistic sex practices. She has made over 20 films, including the short documentaries Annie and My Father is Coming. Treut’s involvement extends across writing, directing, editing and acting.

Angela Robinson is an American film and television director, screenwriter and producer. Outfest Fusion LGBTQ People of Color Film Festival awarded Robinson with the Fusion Achievement Award in 2013 for her contribution to LGBTQ+ media visibility.

Yvonne Welbon is an American independent film director, producer, and screenwriter based in Chicago. She is known for her films, Living with Pride:Ruth C. Ellis @ 100 (1999), Sisters in Cinema (2003), and Monique (1992).

The KASHISH Mumbai International Queer Film Festival is an annual LGBT event that has been held in Mumbai, India, since 2010. The film festival screens gay, lesbian, bisexual, transgender and queer films from India and around the world. It is voted as one of the top five LGBT film festivals in the world.

Janis Cole is a Canadian filmmaker, producer, writer, editor and professor. She has directed several films over the span of her career. Most of these films were done in cooperation with her friend and professional partner, Holly Dale. Her most notable films include Cream Soda (1976) and Prison For Women (1981).

Desiree Lim is a Malaysian-born Canadian independent film director, producer, and screenwriter. She is known for her films Sugar Sweet (2001), Floored by Love (2005), and The House (2011). Lim tends to work within the realm of family drama and comedy, and highlights themes of lesbianism, multiculturalism, and body positivity. She now works in Canada and Japan.

Lethal Lesbian is Israel's only lesbian film festival. The festival has been held annually since 2008, and screens independent short, documentary and feature films from Israel and abroad.

Dykes, Camera, Action! is a 2018 American documentary film about the history of lesbian and queer cinema from the women who made it happen. The documentary is the first feature-length film of New York City based director and editor, Caroline Berler. 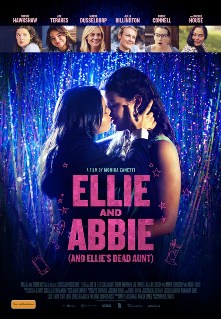 Ellie & Abbie is a 2020 AACTA award winning LGBT romance comedy film written and directed by Monica Zanetti, in her feature directorial debut. It is based on her own 2016 stage play. The film stars Sophie Hawkshaw, Zoe Terakes, Marta Dusseldorp, Rachel House, Julia Billington and Bridie Connell. The movie had its world premiere at the Mardi Gras Film Festival on 13 February 2020, becoming the first Australian film to do so in the festival's 27-year history. It also won the Audience Award for Best Narrative Film at the festival. The film went on to screenings at several other film festivals, and had a limited theatrical release on 19 November 2020.