There are 2 school districts in the province of Prince Edward Island, Canada . Formerly 5, the number has decreased with merges in some areas of the province.

The lieutenant governor of Prince Edward Island is the viceregal representative in Prince Edward Island of the Canadian monarch, Queen Elizabeth II, who operates distinctly within the province but is also shared equally with the ten other jurisdictions of Canada, as well as the other Commonwealth realms and any subdivisions thereof, and resides predominantly in her oldest realm, the United Kingdom. The lieutenant governor of Prince Edward Island is appointed in the same manner as the other provincial viceroys in Canada and is similarly tasked with carrying out most of the monarch's constitutional and ceremonial duties. 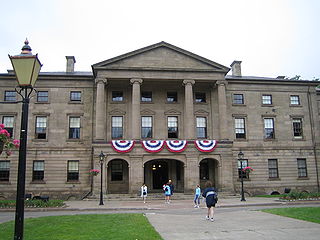 Province House is where the Prince Edward Island Legislature, known as the Legislative Assembly of Prince Edward Island, has met since 1847. The building is located at the intersection of Richmond and Great George Streets in Charlottetown; it is Canada's second-oldest seat of government.

Belfast is a rural municipality in Prince Edward Island, Canada. It is located in southeastern Queens County in the townships of Lot 57 and Lot 58. 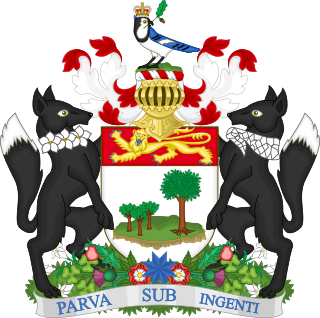 "The Island Hymn" is the patriotic song of the Canadian province of Prince Edward Island. It was first conceived early in 1908 by Professor Harry Watts of the Charlottetown School of Music who at the suggestion of Rev. Dr. Thomas Fullerton, contacted Island author and poet Lucy Maud Montgomery asking if she would compose the hymn's lyrics, which she wrote in 1908. A stanza from the "Hymn" was performed for the first time in public on May 22 of that year at a combined school event marking both Arbor Day and Empire Day. Written to the metre of God Save the King, it was sung to Lawrence W. Watson's music, which had been composed especially for her lyric at the request of Professor Watts. The full piece was not performed until school closing exercises the following June 29th, as Watts recalled, that the "Hymn" was first sung in its entirety.

The following outline is provided as an overview of and topical guide to Prince Edward Island: