This is a list of school districts in the Northwest Territories . [1]

There is also a Montessori School in Yellowknife that does not fall under the above school districts, and the Commission scolaire francophone des Territoires du Nord-Ouest that operates schools in Yellowknife and Hay River.

Blainville is an off-island suburb of Montreal located in southwestern Quebec, Canada. Blainville forms part of the Thérèse-De Blainville Regional County Municipality within the Laurentides region of Quebec. The town sits at the foot of the Laurentian Mountains and is located 35 kilometres (22 mi) northwest of downtown Montreal.

Lorraine is an affluent off-island suburb of Montreal, in southwestern Quebec, Canada on the north shore of the Rivière des Mille-Îles in the Thérèse-De Blainville Regional County Municipality. There are no industries and only a very limited commercial district ; almost all houses are of the detached type. Furthermore, a large portion of the town territory is set aside as wild forest ; some bike/ski trails run through it. The town is divided into two areas, Uptown and Downtown. These two areas are also delimited by Quebec freeway A-640, and are only joined together by the main street overpass.

The Conseil scolaire public du Grand Nord de l'Ontario (CSPGNO, known as French-language Public District School Board No. 57 prior to 1999 manages the French-language schools in much of Northern Ontario. The area in which this school board operates covers 64,238 km2 of Ontario.

The Association des conseils scolaires des écoles publiques de l'Ontario, or ACÉPO, is an educational organization with its headquarters on University Avenue, in Toronto, Ontario, Canada. ACÉPO is an organization that represents the four public secular French first language school boards of Ontario.

The Conseil scolaire public du Nord-Est de l'Ontario manages the French-language schools in the north-east region of Ontario. The area in which this school board operates covers 46,714 km2 (18,036 sq mi) of Ontario.

Laval-Ouest is a district in Laval, Quebec. It was a separate city until the municipal mergers on August 6, 1965.

Bois-des-Filion is an off-island suburb of Montreal, located in Quebec, Canada, to the north of Montreal.

Gore is a township municipality in the Canadian province of Quebec, located within the Argenteuil Regional County Municipality. Its main community is Lakefield. 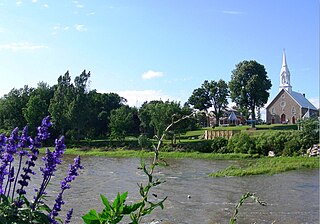 Saint-Placide is a municipality in the Laurentides region of Quebec, Canada, part of the Deux-Montagnes Regional County Municipality, along the north shore of the Ottawa River.

The Greater North Central Francophone Education Region No. 2, known in French as the Conseil scolaire Centre-Nord (CSCN), is one of Alberta's four French language school boards. French language education is intended for children who are eligible under section 23 of the Canadian Charter of Rights and Freedoms. The CSCN is a composite board, operating both public and catholic francophone schools in Beaumont, Camrose, Edmonton, Fort McMurray, Jasper, Legal, Lloydminster, Red Deer, Sherwood Park, St. Albert and Wainwright. The CSCN receives funding for all students from the provincial Government of Alberta. 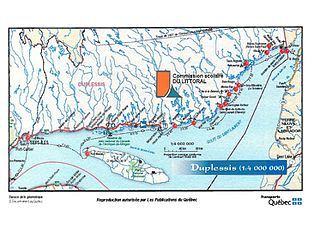 The Centre de services scolaire du Littoral is a geographically-based school service centre in Quebec, Canada, with offices in Sept-Îles and Chevery.

Northwest Francophone Education Region No. 1, known in French as Conseil scolaire du Nord-Ouest No. 1, is a French first language authority within the Canadian province of Alberta operated out of St. Isidore.

The Commission scolaire de la Seigneurie-des-Mille-Îles (CSSMI) is a former francophone school district in the Canadian province of Quebec. It comprises several primary schools and high schools across municipalities in the Laurentides region. The commission is overseen by a board of elected school trustees.

The following outline is provided as an overview of and topical guide to the Northwest Territories: