This is a list of universities in Saint Pierre and Miquelon . [1] 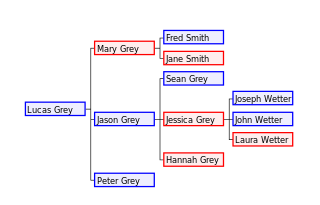 A family tree, or pedigree chart, is a chart representing family relationships in a conventional tree structure. The more detailed family trees used in medicine and social work are known as genograms. 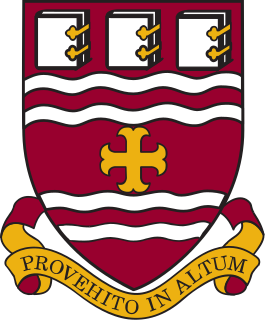 J. Curtis Frazier is an American physician and politician from Springfield, Missouri. He was the vice-presidential nominee of the Constitution Party in the 2000 presidential election. His running-mate was Howard Phillips.

Alexander William Kinglake was an English travel writer and historian.

Laine Theatre Arts, sometimes referred to as Laines, is an independent performing arts college, based in the town of Epsom in Surrey, England. The college was founded in 1974 by former professional dancer and dance teacher Betty Laine OBE, and developed from an earlier school, the Frecker-Laine School of Dancing. It provides specialist vocational training in dance and musical theatre.

The FrancoForum is a specialized language teaching facility owned and operated by the local government in Saint-Pierre and Miquelon, a French collectivity located off the coast of Newfoundland, Canada. Staffed by professional French instructors, the institute offers a variety of courses for both students and teachers wishing to improve their fluency.

André-Adolphe-Eugène Disdéri was a French photographer who started his photographic career as a daguerreotypist but gained greater fame for patenting his version of the carte de visite, a small photographic image which was mounted on a card. Disdéri, a brilliant showman, made this system of mass-production portraiture world famous.

Cowan Heights is a west end neighbourhood in St. John's, Newfoundland and Labrador. Canada Drive and Frecker Drive are the two main road-ways that run through most of the neighbourhood.

Frecker Ridge is a ridge that rises abruptly along the west side of Kirkby Glacier in the Anare Mountains of Victoria Land, Antarctica. It is 5 nautical miles (9 km) long and terminates in the north at Mount Gale. It was named by the Australian National Antarctic Research Expeditions (ANARE) after Sergeant R. Frecker, Royal Australian Air Force, a member of the Antarctic Flight with the ANARE cruise that explored this coast, 1962. The feature lies on the Pennell Coast, a portion of Antarctica lying between Cape Williams and Cape Adare.

Mount Gale is a promontory at the north end of Frecker Ridge in the Anare Mountains of Victoria Land, Antarctica. This topographical feature stands at the south side of the confluence of Ludvig Glacier and Kirkby Glacier. It was named by the Antarctic Names Committee of Australia for Commander d'A.T. Gale, formerly of the Royal Australian Navy, a hydrographic surveyor with the Australian National Antarctic Research Expeditions cruise that explored this coast, 1962. The mountain lies situated on the Pennell Coast, a portion of Antarctica lying between Cape Williams and Cape Adare.

Richardson Bluff is a steep rock bluff which rises on the east side of Kirkby Glacier opposite Frecker Ridge, in the Anare Mountains, Victoria Land. Named by ANARE for Sgt. A. Richardson, RAAF, member of the RAAF Antarctic Flight which accompanied the ANARE cruise to this coast, 1962. 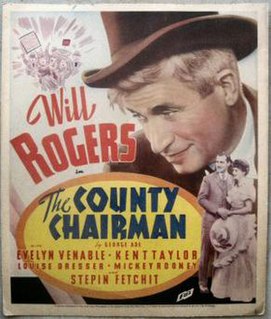 The County Chairman is a 1935 comedy film directed by John G. Blystone and starring Will Rogers. It is based on the 1903 play of the same name.

George Alain Frecker was a Canadian politician and academic administrator.

Sir John Oakley Maund was an English banker, stockbroker, entrepreneur, hunter and mountaineer during the silver age of alpinism.

Arthur Charles Frecker was an Australian rules footballer who played for the Hawthorn Football Club in the Victorian Football League (VFL).