Live at the Apollo (TV series)

Last updated January 26, 2021
Not to be confused with Showtime at the Apollo.

Live at the Apollo (formerly titled Jack Dee Live at the Apollo) is a British stand-up comedy programme performed from the Hammersmith Apollo Theatre in west London. Despite the title, the programmes are recorded, not live.

Jack Dee hosted the first two series and the opening show of the third series, performing a short segment before introducing a guest comedian. Until 2015, all episodes were broadcast on BBC One. The show moved to BBC Two in November 2015. The programme was renamed for its third series which was filmed over three evenings in October 2007. The format was changed to suit with one of the night's performers assuming hosting duties. [1]

A fourth series began transmission on 28 November 2008. It showcased a variety of the newer stand-up comedians and was rescheduled from Monday nights to Friday nights to replace Friday Night with Jonathan Ross after Ross's suspension in the wake of the Sachsgate row. [2] After hosting the first episode, Michael McIntyre got his own show of a similar format; Michael McIntyre's Comedy Roadshow was broadcast for a series of six episodes in 2009. [3]

A fifth series aired in late 2009 and early 2010, [4] the recordings of which took place in October 2009. This series was initially broadcast as edited 30-minute episodes, but the full length (45-minute) versions were then shown in May, June and July 2010.

A sixth series of Live at the Apollo began airing in late November 2010, with new episodes being recorded at the Hammersmith Apollo during September and October 2010. The episodes are 30 minutes in length but may be extended once they reach the repeat channels such as Dave and Comedy Central.

The eleventh series of Live at the Apollo was broadcast on BBC Two for the first time, beginning on 9 November 2015. [33]

The twelfth series of Live at the Apollo was broadcast on BBC Two from 8 November 2016.

The thirteenth series of Live at the Apollo was broadcast on BBC Two from 30 November 2017.

The fourteenth series of Live at the Apollo was broadcast on BBC Two from 15 November 2018.

The fifteenth series of Live at the Apollo was broadcast on BBC Two from 5 November 2019.

Assorted special episodes have been broadcast by the BBC.

The following have appeared as a guest on the show multiple times up to and including the broadcast episodes of series 15:

The theme tune used on the BBC broadcasts (Jet – "Are You Gonna Be My Girl") has been replaced with another instrumental piece for the digital repeats. The instrumental track is called 'Monster Funk' and is from the KPM Production Music Library. It had previously been used for the end titles of 'Live at the Apollo' but is used on the opening and closing titles for digital repeats and DVD issues. 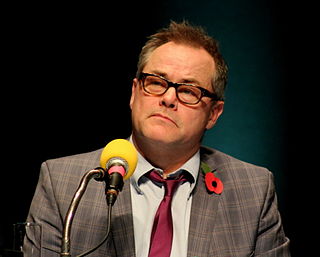 James Andrew Innes Dee is an English stand-up comedian, actor, presenter and writer known for his sarcasm, irony and deadpan humour. He is well known in the United Kingdom for writing and starring in the sitcom Lead Balloon and hosting the panel show I'm Sorry I Haven't A Clue.

Jimeoin is an Irish stand-up comedian and actor. He rose to prominence in Australia in the early 1990s, and had his own TV show.

Observational comedy is a form of humor based on the commonplace aspects of everyday life. It is one of the main types of humor in stand-up comedy. In an observational comedy act, the comedian "makes an observation about something from the backwaters of life, an everyday phenomenon that is rarely noticed or discussed." The humor is based on the premise of "Have you ever noticed?", which has become a comedy cliché. "Observational humor usually takes the form of long monologs of personal narrative; the punchline is either hard to predict or never came."

Russell Joseph Howard is an English "comedian", television presenter, radio presenter and actor, best known for his TV shows Russell Howard's Good News and The Russell Howard Hour and his appearances on the topical panel TV show Mock the Week. He won "Best Compère" at the 2006 Chortle Awards and was nominated for an if.comedy award for his 2006 Aberdeen Festival Fringe show. Howard cited comedians Lee Evans, Richard Pryor and Frank Skinner as influences. 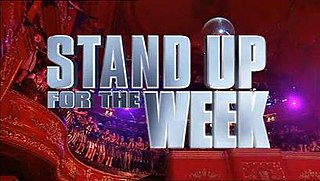 Stand Up for the Week is a British television comedy series that was shown on Channel 4, featuring stand-up comedy performances reflecting topical events. The show began in June 2010 with a six-episode series aired on Friday nights, moving to Saturday nights for the second series which began in March 2011. The first series was hosted by Patrick Kielty, with regular performers Jack Whitehall, Kevin Bridges, Andi Osho and Rich Hall. Bridges replaced Kielty as host for the second series, with Jon Richardson joining as a regular performer. Richardson took over as host of the show for the third series which aired in late 2011, and aside from Rich Hall returning, an otherwise entirely new group of regular performers joined the show: Seann Walsh, Sara Pascoe, Josh Widdicombe and Paul Chowdhry. For the fourth series Andrew Lawrence replaced Rich Hall. For the fifth series, Chowdhry took over as host and new regulars Angela Barnes, Simon Evans and Romesh Ranganathan replaced Chowdhry, Lawrence and Pascoe. In October 2015 Channel 4 confirmed there are no plans to produce more episodes of the show.

Channel 4's Comedy Gala of 2011 is a British comedy benefit show organised by Channel 4. It is the second Channel 4 Comedy Gala, an annual charity event held O2 Arena in London in aid of the Great Ormond Street Children's Hospital. It was filmed live on 24 May 2011, then broadcast on Channel 4 on 10 June 2011. The first Comedy Gala was held 30 March 2010 and broadcast on 5 April 2010. Billed by Channel 4 as "the biggest live stand up show in UK history", it featured seventeen comedians performing stand-up, as well as a number of others performing live and pre-recorded sketches. The first gala raised money for a new anaesthetic room, while the second aims to raise money for a new operating theatre.

Taskmaster is a British comedy panel game show created by British comedian Alex Horne during the Edinburgh Festival Fringe in 2010, and adapted for television in 2015. New episodes premiered on Dave from 2015 until 2019, when the series was acquired by Channel 4. The TV series stars comedian and actor Greg Davies in the title role of the Taskmaster, issuing simple comedic and bizarre tasks to five regular contestants – usually comedians – with Alex Horne acting as assistant to Davies and as umpire during the challenges.