Loudon Snowden Wainwright III (born September 5, 1946) is an American songwriter, folk singer, humorist, and actor. His sister is Sloan Wainwright. He is the father of musicians Rufus Wainwright, Martha Wainwright, and Lucy Wainwright Roche, and is the former husband of the late folk singer Kate McGarrigle.

To date, Wainwright has released 24 studio albums, 4 live albums and 6 compilations, as well as appearing in at least 18 television programmes and feature films. Reflecting upon his career in 1999, he stated, "You could characterize the catalog as somewhat checkered, although I prefer to think of it as a tapestry." [2] In October 2017, Wainwright released his autobiography, Liner Notes: On Parents & Children, Exes & Excess, Death & Decay, and a Few of My Other Favorite Things.

Wainwright was born in Chapel Hill, North Carolina, the son of Martha Taylor, a yoga teacher, and Loudon Wainwright Jr., a columnist and editor for Life magazine. [3] His great-great-grandfather was the politician and diplomat A. Loudon Snowden. His father was not a professional musician, but he played the piano and wrote some songs, exposing his children to musicians such as Tom Lehrer and Stan Freberg, whom Wainwright later cited as influences. [4] Wainwright grew up in Bedford, New York, in Westchester County. Among his sisters is Sloan Wainwright, also a singer. He graduated from St. Andrew's School in Delaware, where the movie Dead Poets Society was filmed.

Wainwright's career began in the late 1960s. He had played the guitar while in school but later sold it for yoga lessons while living in San Francisco. Later, in Rhode Island, Wainwright's grandmother got him a job working in a boatyard. An old lobsterman named Edgar inspired him to borrow a friend's guitar and write his first song, "Edgar". Wainwright soon bought his own guitar and in about a year wrote nearly twenty songs. He went to Boston and New York City to play in folk clubs and was eventually noticed by Milton Kramer, who became his manager. He signed a record deal with Atlantic Records, which released his self-tiled first album in 1970.

Wainwright is perhaps best known for the 1972 novelty song "Dead Skunk (in the Middle of the Road)" and for playing Captain Calvin Spalding (the "singing surgeon") on the American television show M*A*S*H . His appearances spanned three episodes in its third season (1974–1975). [5]

Using a witty, self-mocking style, Wainwright has recorded over twenty albums on eleven different labels. Three of his albums have been nominated for Grammy Awards: I'm Alright (1985), More Love Songs (1986), [6] and High Wide & Handsome: The Charlie Poole Project (2009), for which he won the Grammy for Best Traditional Folk Album in January 2010.

Wainwright has also appeared in a number of films, including small parts in The Aviator , Big Fish , Elizabethtown , The 40-Year-Old Virgin , 28 Days , and Knocked Up , and the television series Undeclared and Parks and Recreation . [5] In the UK he recorded sessions for John Peel from 1971 onwards and appeared on a simultaneous broadcast on BBC TV and on Radio 1 in February 1978 (known as Sight and Sound in Concert). [7] However, it was in the late 1980s that he gained much wider popularity in Britain when he appeared as the resident singer with comedian Jasper Carrott in his UK show, Carrott Confidential, and has remained popular in the UK ever since.

He appeared as a musical guest on Saturday Night Live in the first season's fifth episode, which was broadcast on November 15, 1975. He performed "Bicentennial" and "Unrequited to the Nth Degree" as a guest of host Robert Klein.

Wainwright has claimed that, like many of his contemporaries, he was inspired musically by seeing Bob Dylan at the Newport Folk Festival in 1963. He was one of many young folksingers tagged as the "new Dylan" in the early 1970s, a fact that he later ruefully satirized in his song, "Talking New Bob Dylan", from the album History (1992). [6]

Wainwright was a judge for the 4th annual Independent Music Awards. [8]

According to his own liner notes, Wainwright entered a period of deep depression following the death of his mother in 1997 and believed he could never write again. Retreating to his mother's cabin in the woods, he underwent therapy and gradually recovered, eventually recording the soul-baring Last Man on Earth in 2001. Since then, his recording career has mostly returned to its previous frequency.

In September 2006, Wainwright and musician Joe Henry began composing the music for the Judd Apatow film Knocked Up , which was released on June 1, 2007. In addition to composing the soundtrack, Wainwright appeared in the film in a supporting role as the protagonists' obstetrician. [9] He has also composed music for the new theatre production of Carl Hiaasen's Lucky You , which premiered at the 2008 Edinburgh Festival Fringe. [10]

As of 2020 Wainwright has continued to release new music.

Wainwright's first marriage, to the singer-songwriter Kate McGarrigle, ended in divorce. During their marriage, they had two children, Rufus and Martha. Rufus was the inspiration behind two of Wainwright's songs: "Rufus Is a Tit Man" (referring to Rufus during breastfeeding) and "A Father and a Son," a retrospective. Wainwright's songs inspired by Martha are "Pretty Little Martha" (composed about her as an infant), "Five Years Old" (about missing her fifth birthday), the confessional "Hitting You," duet "Father/Daughter Dialogue" and comedy number, "I'd Rather Be Lonely."

Both Rufus and Martha are singer-songwriters. Rufus composed "Dinner at Eight", about his conflicted relationship with his father. [11] Martha composed the song "Bloody Mother Fucking Asshole," which according to her is about her father. [12] They sang a duet on the song "Father Daughter Dialogue" (on Wainwright's 1995 album Grown Man ) and collaborated on the song "You Never Phone" (on Wainwright's 2003 album So Damn Happy ).

Wainwright had a relationship with the singer Suzzy Roche, during which they had one daughter, Lucy Wainwright Roche, who is also a singer. The relationship ended, although Wainwright and Suzzy Roche remain on good terms and occasionally appear onstage together, sometimes with their daughter.

Wainwright's second marriage, to Ritamarie Kelly, ended in divorce. They have a daughter, Alexandra (Lexie) Kelly Wainwright (born 1993). Since 2015, Wainwright has lived with Susan Morrison, an editor at The New Yorker. [13] [14] [15] 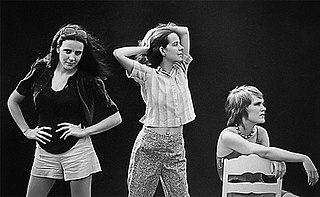 The Roches were a vocal group of three songwriting Irish-American sisters from Park Ridge, New Jersey, United States. They were known for their "unusual" and "rich" harmonies, quirky lyrics, and casually comedic stage performances. 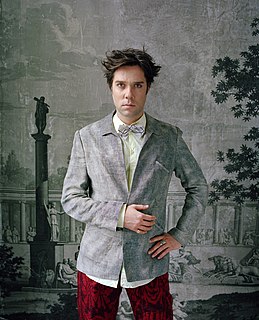 Rufus McGarrigle Wainwright is an American-Canadian singer, songwriter, and composer. He has recorded nine albums of original music and numerous tracks on compilations and film soundtracks. He has also written two classical operas and set Shakespeare's sonnets to music for a theater piece by Robert Wilson.

Kate McGarrigle was a Canadian folk music singer-songwriter, who wrote and performed as a duo with her sister Anna McGarrigle. 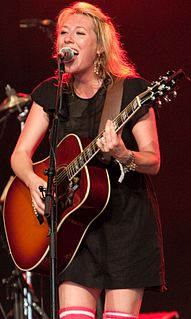 Suzzy Roche, originally from Park Ridge, New Jersey, is best known for her work with the vocal group The Roches, alongside sisters Maggie and Terre. Suzzy is the youngest of the three, and joined the act in 1977. She is the author of the novel Wayward Saints and the children's book Want To Be in a Band?

History is the twelfth studio album by American singer-songwriter Loudon Wainwright III, released on September 21, 1992 on Charisma Records. The album was recorded following the death of Wainwright's father, Loudon Wainwright Jr. Regarding his father's death and its influence on History, Wainwright stated that:

[the] whole record is about him and me, and his death, and the struggle with my own son - and so as far as reconciliation goes, I think when one or both of your parents dies, you realize you're in the batter's box. That's it: You're going to die. You get a taste of your own mortality, and you also are not as angry at them, at least after a while, and so maybe you do try to start to reconcile some things.

Last Man on Earth is the sixteenth studio album by American singer-songwriter Loudon Wainwright III, released on September 24, 2001 on Red House Records. Recorded in the wake of Wainwright's mother's death and the collapse of a romantic relationship, the album thematically addresses feelings of grief and loneliness. In 2012, Wainwright noted, "Last Man on Earth was written right after my mother died, so a lot of the material on that record has to do with that momentous event. The life circle was present on a lot of those songs." 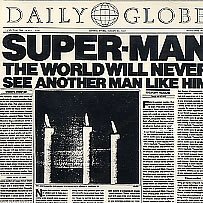 "Superman's Song" is the first single of Canadian folk-rock group Crash Test Dummies, appearing on their 1991 debut album The Ghosts That Haunt Me. The single was the group's first hit, reaching number four in Canada, number 56 in the United States and number 87 in Australia. It was featured in the pilot of the Canadian TV series Due South. 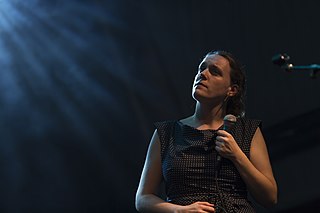 Lucy Wainwright Roche is an American singer-songwriter. Preceded by two EPs, 8 Songs and 8 More, Roche released her debut album, Lucy in October 2010. In 2013, she starred as Jeri in the Stuff You Should Know television show.

Songs from an Unmarried Housewife and Mother, Greenwich Village, USA is the second album by Suzzy Roche, released in 2000. 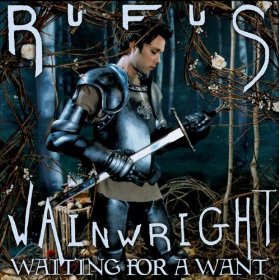 High Wide & Handsome: The Charlie Poole Project is the 20th studio album by American singer-songwriter Loudon Wainwright III. The album, a double-CD released on August 18, 2009, on 2nd Story Sound, pays tribute to singer and banjo picker Charlie Poole (1892–1931). It features 30 tracks, including new versions of songs made popular by Poole from 1925 through 1930, as well as original songs on Poole's turbulent life by Wainwright and producer Dick Connette.

40 Odd Years is a compilation box set by American singer-songwriter Loudon Wainwright III, released on May 3, 2011 on Shout! Factory. The set contains music from throughout Wainwright's career, alongside a DVD of live performances and documentary pieces. The collection is co-produced and curated by filmmaker Judd Apatow, who also writes an introduction in the liner notes.

Older Than My Old Man Now is the twenty-second studio album by American singer-songwriter Loudon Wainwright III, released on April 17, 2012 on 2nd Story Sound Records. Described as "a gleefully morbid summing up of [Wainwright's] life in which he ponders childhood, family history, aging and death," the album is produced by High Wide & Handsome: The Charlie Poole Project (2009) collaborator Dick Connette, and features contributions from each of Wainwright's children.

There's a Last Time for Everything is the second full-length studio album by singer-songwriter Lucy Wainwright Roche. The album was recorded over ten days in Nashville in collaboration with producer Jordan Brooke Hamlin. Of the quick recording, Lucy said, "Jordan and I crafted these tracks over long summer days that stretched into late, late nights. We were gloriously swept up in the process, like kids working on a secret project. Because we were working with a limited time frame, we went with our gut on every decision. There wasn't time for us to second guess or retrace our steps. The urgency of working that way was exciting and freeing – and also a little bit terrifying." The album was released on October 15, 2013.

Songs in the Dark is the debut album by the Wainwright Sisters, a singer-songwriter duo featuring the Canadian-American Martha Wainwright and her American half-sister Lucy Wainwright Roche. The album, released on November 13, 2015, includes lullabies that their mothers Kate McGarrigle and Suzzy Roche sang to them as children, plus songs by Woody Guthrie, Jimmie Rogers, and their father Loudon Wainwright III.

"One Man Guy" is a song written by American singer-songwriter Loudon Wainwright III. It originally appeared on his 1985 studio album I'm Alright, and was included on his 2009 compilation album Essential Recordings: One Man Guy.