Love Live! School Idol Project is an anime television series produced by Sunrise in collaboration with ASCII Media Works and Lantis as part of the Love Live! franchise. The series follows a group of school girls who form an idol group in order to save their school from being shut down. The first season aired 13 episodes on Tokyo MX from January 6 to March 31, 2013. The opening theme is "Bokura wa Ima no Naka de" (僕らは今のなかで, lit. "We're Living in the Moment"), while the ending theme is "Kitto Seishun ga Kikoeru" (きっと青春が聞こえる, lit. "Surely Our Youth Will Hear Us"); both are performed by μ's (Emi Nitta, Aya Uchida, Suzuko Mimori, Yoshino Nanjō, Pile, Riho Iida, Aina Kusuda, Yurika Kubo and Sora Tokui). A second season aired from April 6 to June 29, 2014. [1] The opening theme is "It's Our Miraculous Time" [lower-alpha 1] (それは僕たちの奇跡, Sore wa Bokutachi no Kiseki, lit. "That's Our Miracle"), while the ending theme is "Donna Toki mo Zutto" (どんなときもずっと, Always No Matter What); both are performed by μ's. Both seasons are licensed in North America by NIS America and are simulcast by Crunchyroll. [4] [5] [6] An animated film, Love Live! The School Idol Movie , was released on June 13, 2015. [7]

Riho Iida is a Japanese ex-child model-turned-actress, voice actress and singer. Her nickname is Rippi.

Aya Uchida is a Japanese voice actress and singer. She is affiliated with Across Entertainment. She played Kotori Minami in Love Live! School Idol Project and Kaban in Kemono Friends. She released the single "Sign/Candy Flavor", the song "Sign" was used as the ending theme for The Quintessential Quintuplets. Her nickname is Ucchi.

Love Live! School Idol Project is a Japanese multimedia project co-developed by ASCII Media Works' Dengeki G's Magazine, music label Lantis, and animation studio Sunrise. It is the first multimedia project in the Love Live! franchise. The project revolves around a group of nine schoolgirl friends who become idols in order to save their school from shutting down. It launched in the August 2010 issue of Dengeki G's Magazine, and went on to produce music CDs, anime music videos, two manga adaptations, and video games.

Sora Tokui is a Japanese voice actress, singer, and manga artist who made her debut as a voice actress in 2009 as Himemiya in Weiß Survive R.

Yurika Kubo is a Japanese voice actress, singer and model. She is associated with Stay Luck. She played Hanayo Koizumi in the idol group μ's, which is part of the Love Live! franchise. Her nickname is Shikaco.

Aina Kusuda is a Japanese voice actress and singer from Chiba Prefecture. Kusuda was previously affiliated with DANDELION, but is now a freelancer. Kusuda is best known as Nozomi Toujou in Love Live! School Idol Project series, and has worked with the other Love Live! girls in singing multiple songs that have charted on Oricon. Kusuda's other major roles include Suko in Million Doll and Rose in Rilu Rilu Fairilu. Her nickname is "Kussun". 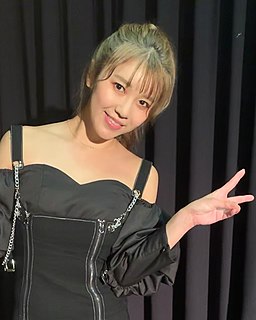 Eriko Hori, better known by her stage name Pile, is a Korean–Japanese singer, actress and voice actress from Tokyo. Her first roles were minor parts in TV series and films during 2006. She debuted as a singer after she was selected in a 2006 Japan-wide audition and she made her voice acting debut in the Love Live! School Idol Project series in 2010. 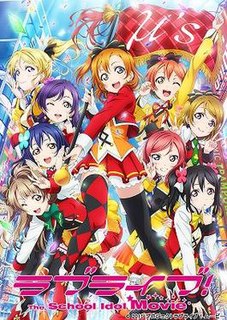 Love Live! The School Idol Movie is a 2015 Japanese animated youth school musical film. The film is part of the Love Live! School Idol Project multimedia series by Sunrise, Lantis and Dengeki G's Magazine, taking place after the second season of the 2013-2014 anime television series. The film was directed by Takahiko Kyōgoku, written by Jukki Hanada, produced by Sunrise, and distributed by Shochiku. The film was released in Japan on June 13, 2015 and licensed in North America by NIS America. The film was the 9th highest-grossing Japanese film of the year in Japan with over ¥2.8 billion and was nominated for Animation of the Year at the 39th Japan Academy Prize.

Love Live! Sunshine!! is a 2016 anime television series produced by Sunrise and is the follow-up to the 2013 anime series, Love Live! School Idol Project. Taking place at Uranohoshi Girls' Academy, Chika Takami, a girl who became a fan of the school idol group μ's, decides to follow in their footsteps and form her own school idol group, Aqours. The first season aired in Japan between July 2 and September 24, 2016 and was simulcast by Funimation, Crunchyroll, and Madman Entertainment. An English dub by Funimation began streaming from July 30, 2016. The opening and ending themes are "Aozora Jumping Heart" and "Yume Kataru yori Yume Utaou" respectively, both performed by Aqours. A second season aired from October 7 to December 30, 2017 and was also simulcast by Crunchyroll and dubbed by Funimation. The opening and ending themes respectively are "Mirai no Bokura wa Shitteru yo" and "Yūki wa Doko ni? Kimi no Mune ni!", both performed by Aqours. "Aozora Jumping Heart" is used as the opening theme for the final episode.

Love Live! Sunshine!! is a Japanese multimedia project co-developed by ASCII Media Works' Dengeki G's Magazine, music label Lantis, and animation studio Sunrise. The project is the second series of the Love Live! franchise and is a spin-off sequel of Love Live! School Idol Project. The story of this project revolves around a new group of nine schoolgirls who become idols in order to save their school from shutting down. It launched in April 2015 with music CDs and anime music videos, followed by a manga version in 2016.

Love Live! School Idol Festival is a Japanese rhythm game series developed by KLab and published by Bushiroad's Bushimo for Android and iOS platforms. It was first released in Japan on April 15, 2013 (Android) and June 8, 2013 (iOS). The game is free-to-play with an in-app purchase system. It features songs and characters from the series Love Live! School Idol Project and Love Live! Sunshine!!, newly introduced girls, and stories that are not included in other media in the Love Live! franchise.

Aguri Ōnishi is a Japanese actress, voice actress and singer from Aichi Prefecture. She is managed by Link Plan Inc, a subsidiary of Pro-Fit.

"Snow Halation" is a pop song by the Japanese idol group μ's as part of the Love Live! multimedia franchise. Composed by Takahiro Yamada with lyrics by Aki Hata, it was released by Lantis as the group's second single on December 22, 2010. The release was accompanied by a six-minute anime music video produced by studio Sunrise. A re-animated sequence was broadcast in June 2014 as an insert song in the ninth episode of the second season of the Love Live! School Idol Project anime television series.