MJP Racing Team Austria is an auto racing team founded by Austrian racing driver and entrepreneur Max Pucher. The team has been competing in rallycross since its creation. The team uses Supercar specification Ford Fiesta built by MJP Racing. The cars were former built by Stohl Racing but before the 2016 season started Max Pucher separated his team from Stohl Racing and operates the cars by himself. [1] 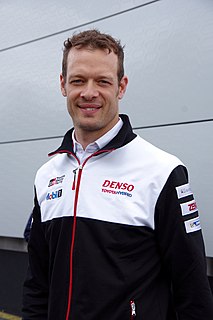 Max Jean is a French former racing driver who won the Formule France championship in 1968. In addition to numerous Formula Two and Formula Three entries, Jean participated in one Formula One Grand Prix, driving a March for Frank Williams Racing Cars in his home race on 4 July 1971. He scored no championship points.

Wayne Taylor is a South African sports car racing driver and team owner. He won the 1996 and 2005 24 Hours of Daytona, and the 2005 Grand-Am Rolex Sports Car Series Daytona Prototype drivers' championship. He drove for SunTrust Racing with Max Angelelli. He co-drove in the 2006 International Race of Champions in the United States with Angelelli. Taylor now owns and manages his own team competing in the WeatherTech SportsCar Championship.

Toshihiro 'Toshi' Arai is a Japanese rally driver and team owner. He is the first Japanese FIA world champion.

The Honda RA106 was the car with which the Honda team competed in the 2006 Formula One season. It was driven by Rubens Barrichello, who joined from Ferrari, and Jenson Button, who had spent three seasons with the team as British American Racing. The year marked the first time Honda had competed as a full team since 1968; since then it had only competed as an engine supplier until taking over BAR completely in late 2005. Honda used 'Lucky Strike' logos in Bahrain, Malaysia, Australia, Monaco, and Japan, and '555' logos in China.

Kronos Racing is a Belgian auto racing and rally team.

The Brazil World Rally Team is a Brazilian World Rally Championship team, based in Salvador, Brazil and Groß-Enzersdorf, Austria, that made their début in the 2011 season at the Rally de Portugal, round three of the 2011 season. They started with a Super 2000-spec Mini before switching to the Mini John Cooper Works WRC for their next round, the Rally d'Italia Sardegna. In 2012, at the Rally de Portugal, they switched to the Ford Fiesta RS WRC. The team has been registered as a WRC Team entry, and plans to add a second car to the lineup by 2013.

TitansRX International Europe Series is a group of rallycross series, currently organised by racing driver Max Pucher and businessman Chip Pankow. The initial series was series run in North America in 2011 and ran for seven seasons until the series folded in 2018, where the series was replaced by the Americas Rallycross Championship. In late-2018, Max Pucher revived the brand and set up the series Titans-RX Europe, starting in 2019 and the International Series starting in 2020.

The 2014 Dunlop MSA British Touring Car Championship was a multi-event motor racing championship for production-based touring cars held across England and Scotland. The championship features a mix of professional motor racing teams and privately funded amateur drivers competing in highly modified versions of Family cars which are sold to the general public and conform to the technical regulations for the championship. It is one of the most popular domestic motor racing series in the United Kingdom, with an extensive program of support categories built up around the BTCC centrepiece. It was the 57th British Touring Car Championship (BTCC) season. 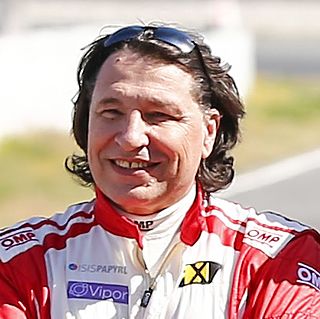 Max Pucher is an Austrian businessman and racing driver currently participating in the World Rallycross Championship. He is the owner and team principal of MJP Racing Team Austria. He also co-founded Swiss-Austrian software company ISIS Papyrus.

STARD is an auto racing team founded by Austrian racing driver Manfred Stohl. The team supplies Ford Fiestas for the World Rallycross Championship and the Kia Cee'd for TCR-specification series. They are also developing the first electric rallycross cars.

The Red Bull RB15 is a Formula One racing car designed and constructed by Red Bull Racing to compete during the 2019 FIA Formula One World Championship. The car was driven by Max Verstappen and Pierre Gasly and Alexander Albon. Pierre Gasly was originally meant to be driving the car for the entire season after moving from Toro Rosso to replace Daniel Ricciardo. However after the 2019 Hungarian Grand Prix it was announced that Alexander Albon would be replacing Gasly for the remainder for the season. The RB15 is the first car built by Red Bull Racing with a Honda engine, and made its competitive début at the 2019 Australian Grand Prix. Max Verstappen's win at the 2019 Austrian Grand Prix made the RB15 the first Honda-powered car to achieve victory since Jenson Button won for Honda at the 2006 Hungarian Grand Prix in the Honda RA106.