Mark Jay Ablowitz (born June 5, 1945, New York) [2] is a professor in the department of Applied Mathematics at the University of Colorado at Boulder, Colorado. He was born in New York City.[ citation needed ]

Ablowitz received his Bachelor of Science degree in Mechanical Engineering from University of Rochester,[ when? ] and completed his Ph.D. in Mathematics under the supervision of David Benney at Massachusetts Institute of Technology in 1971. [1] [3]

In mathematics and physics, the inverse scattering problem is the problem of determining characteristics of an object, based on data of how it scatters incoming radiation or particles. It is the inverse problem to the direct scattering problem, which is to determine how radiation or particles are scattered based on the properties of the scatterer. 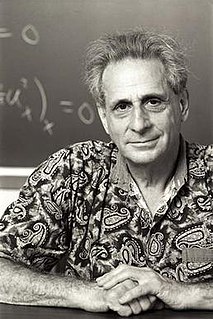 Martin David Kruskal was an American mathematician and physicist. He made fundamental contributions in many areas of mathematics and science, ranging from plasma physics to general relativity and from nonlinear analysis to asymptotic analysis. His most celebrated contribution was in the theory of solitons.

In theoretical physics, the (one-dimensional) nonlinear Schrödinger equation (NLSE) is a nonlinear variation of the Schrödinger equation. It is a classical field equation whose principal applications are to the propagation of light in nonlinear optical fibers and planar waveguides and to Bose–Einstein condensates confined to highly anisotropic cigar-shaped traps, in the mean-field regime. Additionally, the equation appears in the studies of small-amplitude gravity waves on the surface of deep inviscid (zero-viscosity) water; the Langmuir waves in hot plasmas; the propagation of plane-diffracted wave beams in the focusing regions of the ionosphere; the propagation of Davydov's alpha-helix solitons, which are responsible for energy transport along molecular chains; and many others. More generally, the NLSE appears as one of universal equations that describe the evolution of slowly varying packets of quasi-monochromatic waves in weakly nonlinear media that have dispersion. Unlike the linear Schrödinger equation, the NLSE never describes the time evolution of a quantum state. The 1D NLSE is an example of an integrable model.

David George Crighton, FRS was a British mathematician and physicist.

In mathematics, and in particular in the theory of solitons, the Dym equation (HD) is the third-order partial differential equation

In mathematics, integrability is a property of certain dynamical systems. While there are several distinct formal definitions, informally speaking, an integrable system is a dynamical system with sufficiently many conserved quantities, or first integrals, such that its behaviour has far fewer degrees of freedom than the dimensionality of its phase space; that is, its evolution is restricted to a submanifold within its phase space.

In mathematics and physics, the Kadomtsev–Petviashvili equation is a partial differential equation to describe nonlinear wave motion. Named after Boris Borisovich Kadomtsev and Vladimir Iosifovich Petviashvili, the KP equation is usually written as:

Athanassios Spyridon Fokas is a Greek mathematician, with degrees in Aeronautical Engineering and Medicine. Since 2002, he is Professor of Nonlinear Mathematical Science in the Department of Applied Mathematics and Theoretical Physics (DAMTP) at the University of Cambridge. 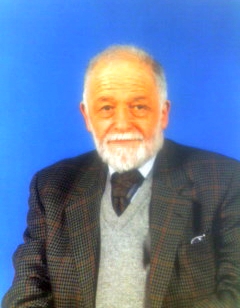 Robin K. Bullough was a British mathematical physicist known for his contributions to the theory of solitons, in particular for his role in the development of the theory of the optical soliton, now commonly used, for example, in the theory of trans-oceanic optical fibre communication theory, but first recognised in Bullough's work on ultra-short optical pulses. He is also known for deriving exact solutions to the nonlinear equations describing these solitons and for associated work on integrable systems, infinite-dimensional Hamiltonian systems, and the statistical mechanics for these systems. Bullough also contributed to nonlinear mathematical physics, including Bose–Einstein condensation in magnetic traps.

Robert M. Miura was a Distinguished Professor of Mathematical Sciences and of Biomedical Engineering at New Jersey Institute of Technology (NJIT) in Newark, New Jersey. He was formerly a professor in the Department of Mathematics at the University of British Columbia in Vancouver. 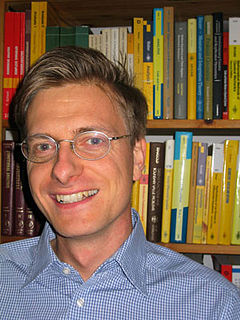 John Morgan Greene was an American theoretical physicist and applied mathematician, known for his work on solitons and plasma physics. 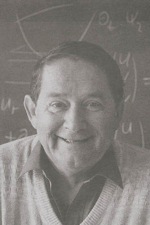 Wiktor Eckhaus was a Polish–Dutch mathematician, known for his work on the field of differential equations. He was Professor Emeritus of Applied Mathematics at the Utrecht University.

Integrable algorithms are numerical algorithms that rely on basic ideas from the mathematical theory of integrable systems.

In nonlinear systems, the three-wave equations, sometimes called the three-wave resonant interaction equations or triad resonances, describe small-amplitude waves in a variety of non-linear media, including electrical circuits and non-linear optics. They are a set of completely integrable nonlinear partial differential equations. Because they provide the simplest, most direct example of a resonant interaction, have broad applicability in the sciences, and are completely integrable, they have been intensively studied since the 1970s.