Mirwaiz Mohammad Umar Farooq (born 23 March 1973) is the Mirwaiz of Kashmir. He is the chairman of the Awami Action Committee, one of the two key factions of the All Parties Hurriyat Conference in Jammu and Kashmir, India.

In October 2014, Farooq was listed as one of The 500 Most Influential Muslims by the Royal Islamic Strategic Studies Centre, Jordan. The report is issued annually in cooperation with Prince Al-Waleed Bin Talal Center for Muslim-Christian Understanding [1] at Georgetown University in the United States. [2]

As the Mirwaiz of Kashmir and chairman of the Hurriyat Conference, Umar Farooq has an important religious as well as political role in the Kashmir Valley. He is seen as the spiritual leader of Kashmir's Muslims. [3]

At the age of 17, following the assassination of his father by unknown gunmen, Mirwaiz Maulvi Farooq, the leader of Awami Action Committee, Farooq united 23 Kashmiri pro-freedom organizations into the All Parties Hurriyat Conference (APHC). Mirwaiz Maulvi Farooq's funeral procession on 21 May 1990, witnessed the bloodshed near the Islamia College, wherein 72 people, including four women were killed; his body being dropped in the middle of the road. This roused public sentiment, and gave leverage to Mirwaiz Umar Farooq's political work in the valley. [4] He has constantly tried to raise awareness about the Kashmir issue internationally. He was also shown among the Asian Heroes by Time magazine. [5] [6] He maintains that dialogue must take place with India and Pakistan, so long as the Kashmiri aspirations are heard as well.

He became the 14th Mirwaiz (Kashmiri term for traditional preacher of Muslims in Kashmir) on 30 May 1990. [7] Rediff On The NeT's Chindu Sreedharan interviewed him in 1997, in which he described the role of Mirwaiz in Kashmir politics :-

"My family played a major role in evolving politics here. The first party, the Muslim Conference, was established in the valley in 1931. My great grandfather, the then Mirwaiz headed it. In fact, it was he who introduced Sheikh Abdullah to the people. Later, Abdullah formed the Jammu & Kashmir National Conference and my grandfather was exiled to Pakistan where he died.

My father then took over. In 1963, he formed another party -- the People's Action Committee -- which stood for giving people their basic rights. Till 1990 when he was assassinated, he was campaigning for that cause. So all along, the political role has been present in the institution of the Mirwaiz." [8]

Before joining Kashmir politics, Farooq was an alumnus of Burn Hall School in Srinagar. He had interests in computers and wanted to become a software engineer. He holds a postgraduate degree in Islamic Studies called ‘Moulvi Fazil’, and a PhD in same from Kashmir University, on the topic "Politico-Islamic role of Shah-e-Hamdan", a 14th-century Islamic scholar who introduced Islam in the Valley. [9] [10] [ citation needed ]

Mirwaiz Umar Farooq is married to Kashmiri-American Sheeba Masoodi, youngest daughter of Sibtain Masoodi, a Kashmiri doctor of Barzulla locality of Kashmir, which is famous for its Bone and Joints Hospital, [11] settled in Buffalo, New York, in the United States, migrating in the early 70s. [12] Mirwaiz is father to two daughters, Maryam and Zainab; and a son born on 11 February 2017. [13]

Syed Ali Shah Geelani was an Islamist, pro-Pakistan separatist leader in Jammu and Kashmir, regarded as the father of the Kashmiri jihad. He was a member of Jamaat-e-Islami Kashmir between 1953 and 2004, and regarded as one of its top leaders. He left Jamaat in 2004 and founded Tehreek-e-Hurriyat, a key constituent of the All Parties Hurriyat Conference (APHC), a conglomeration of separatist parties in Kashmir. Geelani served as the Chairman of the Hurriyat Conference until he quit the group in June 2020. Geelani was also a three-time Member of the Legislative Assembly from the Sopore constituency, elected on a Jamaat-e-Islami ticket in 1972, 1977 and in 1987.

All Parties Hurriyat Conference (APHC) is an alliance of 26 political, social and religious organizations formed on 9 March 1993, as a united political front to raise the cause of Kashmiri separatism in the Kashmir conflict. Mehmood Ahmed Saghar was the first convener of the APHC-PAK chapter when the alliance was established in 1993. The alliance has historically been viewed positively by Pakistan as it contests the claim of the Indian government over the State of Jammu and Kashmir. Mirwaiz Umar Farooq is its chairman and in 2009 Mehmood Ahmed Saghar was unanimously elected as convener of APHC in Pakistan, and Ghulam Muhammad Safi was elected as its convener in Pakistan in January 2010.

Hizb-ul-Mujahideen is an Islamist militant group operating in Indian-administered Kashmir. Its goal is to separate Kashmir from India and merge it with Pakistan. The group has claimed responsibility for multiple terror attacks in India. It has been designated as a terrorist group by the European Union, India, Canada, and the United States. It remains a lawfully-operating organisation in Pakistan; the group professes a radical right-wing Islamic ideology.

Mirwaiz is a hereditary institution of head priests that is unique to the Kashmir Valley. The traditional role of mirwaizes is to provide religious education in the shrines and mosques. Over time, the mirwaizes also took up social, cultural and political activities. 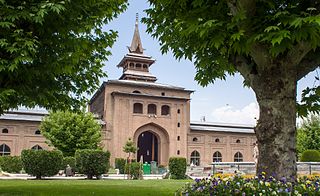 Jamia Masjid is a mosque in Srinagar, Jammu and Kashmir, India. Situated at Nowhatta in the middle of the Old City, the Mosque was commissioned by Sultan Sikandar in 1394 CE and completed in 1402 CE, at the behest of Mir Mohammad Hamadani, son of Mir Sayyid Ali Hamadani, and is regarded as one of the most important mosques in Kashmir. The Mosque is located in Downtown which remains a central zone to the religio-political life in Srinagar. Thronged by Muslims every Friday, it is one of the prime tourist attractions of Srinagar.

The Indira–Sheikh Accord signed in 1975 between Kashmiri leader Sheikh Abdullah and then Prime Minister of India Indira Gandhi, decided the terms under which Abdullah would reenter the politics of Kashmir. It allowed Abdullah to become Chief Minister of Jammu and Kashmir again after 22 years and enabled competitive politics in the State.

Mohammad Farooq Shah was the Mirwaiz of his time in Kashmir and chairman of the All Jammu and Kashmir Awami Action Committee, a coalition of disparate political parties in Jammu and Kashmir that sought resolution of the Kashmir conflict.

On 26 May 2008, the government of India and the state Government of Jammu and Kashmir reached an agreement to transfer 99 acres (0.40 km2) of forest land to the Shri Amarnathji Shrine Board (SASB) in the main Kashmir valley to set up temporary shelters and facilities for Hindu pilgrims. This caused a controversy, with demonstrations from the Kashmir valley against the land transfer and protests from the Jammu region supporting it. The largest demonstration saw more than 500,000 protesters at a single rally, among the largest in Kashmir's history.

Elections for the Indian state of Jammu and Kashmir were held over seven days in November and December 2008. The previous government led by the Jammu and Kashmir People's Democratic Party (PDP) in coalition with the Indian National Congress (INC) collapsed when the PDP withdrew. Following the election, the Jammu & Kashmir National Conference (NC) agreed on a coalition with Congress and their leader, Omar Abdullah became the state's youngest-ever Chief Minister at 38.

Mohammad Abbas Ansari is a political leader and Shia cleric from Indian-administered Jammu and Kashmir. He is a Kashmiri separatist, ex-chairman of the All Parties Hurriyat Conference, and founder of the Jammu & Kashmir Ittihadul Muslimeen (JKIM) political party. He is considered a moderate and has called for an end to violence in that region. 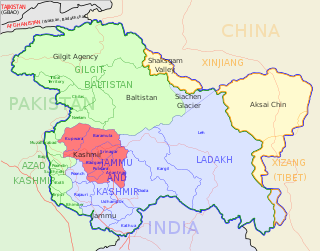 The 2010 Kashmir unrest was a series of violent protests and riots in the Kashmir Valley which started in June 2010 after the Indian Army claimed to have killed three "Pakistani infiltrators" in which a soldier of the Territorial Army, a counter-insurgent and a former special police officer had found three young men from their Nadihal village in Baramulla district and killed them in a staged encounter at Sona Pindi. The protests occurred in a movement launched by Hurriyat Conference led by Syed Ali Shah Geelani and Mirwaiz Umar Farooq in the Indian state of Jammu and Kashmir in June 2010, who called for the complete demilitarisation of Jammu and Kashmir. The All Parties Hurriyat Conference made this call to a strike, citing human rights abuses by security forces. Freedom Fighters shouting pro-independence slogans, defied curfew, attacked riot police with stones and burnt vehicles and buildings. The protests started out as anti India protests but later were also targeted against the United States following the 2010 Qur'an-burning controversy. The riot police consisting of Jammu and Kashmir Police and Indian Para-military forces fired teargas shells rubber bullets and also live ammunition on the protesters, resulting in 112 deaths, including many teenagers and an 11-year-old boy. The protests subsided after the Indian government announced a package of measures aimed at defusing the tensions in September 2010.

Atiq Ullah or Atiqullah was acting Mirwaiz of Kashmir during the 1950s. 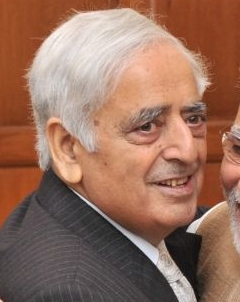 Masarat Alam Bhat is a Kashmiri separatist leader and chairman of the Jammu Kashmir Muslim League and also serving as chairman of the Hurriyat Conference, the umbrella organization of the separatists in Kashmir. He was appointed as chairman of Hurriyat Conference after the death of Syed Ali Shah Geelani. He played a significant role in the 2010 Kashmir stone pelting rallies which broke out against the Machil encounter carried out by the Indian Army in Kashmir. Government has booked Masrat Alam in 27 criminal cases but in most of these he has either been exonerated or bailed out by the courts and was released after Mufti Mohammad Sayeed took over as the Chief Minister of Jammu and Kashmir on 1 March 2015. He was detained under the controversial Public Safety Act and was in March 2015 released which caused a major political controversy and dominated Indian Parliament Proceedings. Amid speculations over his release Masrat Aalam said that no deal was made between him and the Chief Minister Mufti Mohammad Sayeed, saying "I spent more than four years in prison and during all these years I challenged the grounds of my 'illegal' detention". He has been Jailed for 17 years and has around 27 cases against him.

Sir Syed Sani Syed Ali Shah Bukhari commonly known as Ali Shah, Sir Syed Sani, Molvi Saeeb, Sir Syed Kashmir, Chirag-i-Beerwah, or Musleh-Millat, was a 20th-century Kashmiri Muslim pragmatist, Islamic modernist, philosopher, Islamic jurist, social activist and educator in the Budgam district of Jammu and Kashmir. He founded Mazhar Ul Haq High School Beerwah in 1934 and Anjuman Mazhar Ul Haq in 1951. He also reconstructed and expanded the Grand Jamia Masjid Beerwah. He was the khateeb (Orator), Imam and Mirwaiz of the Grand Jamia Masjid Beerwah whose foundation stone was laid by his elder brother, Syed Syeed Shah Bukhari, in 1928. Syed Syeed Shah Bukhari was the Imam/Mirwaiz of historical Jamia Masjid, Srinagar after Mirwaiz Yousef Sahib until he left the Kashmir Valley. He is known as an early pioneer who recognized the critical role of education in the empowerment of the poor and disenfranchised in the Muslim community. In more than one way, Bukhari was a social reformer and a national builder of Jammu and Kashmir, particularly Allaqa Beerwah, which forms a major part of central and north Kashmir. He commanded respect from Sikhs, Hindus and Muslims for his views and dedication to the cause of education.

Mirwaiz Muhammad Yusuf Shah was a mirwaiz of Kashmir. He also served as a President of Azad Kashmir.

Mohammad Ashraf Khan, chiefly known as Ashraf Sehrai or just as Sehrai, was a Kashmiri separatist leader and chairman of Tehreek-e-Hurriyat, a united political front formed during the Kashmir conflict. He was elected chairman through a first-ever election conducted in the history of Hurriyat when Syed Ali Shah Geelani relinquished office due to his deteriorating health.