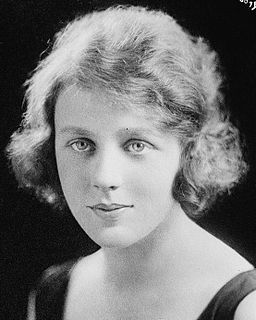 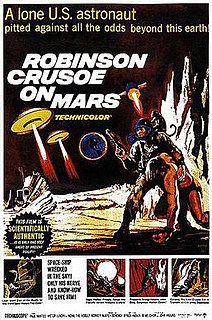 Robinson Crusoe on Mars is a 1964 American science fiction film directed by Byron Haskin and produced by Aubrey Schenck that stars Paul Mantee, Victor Lundin, and Adam West. It is a science fiction retelling of the classic 1719 novel Robinson Crusoe by Daniel Defoe. The film was distributed by Paramount Pictures and filmed in Technicolor and Techniscope.

Filmzauber, literally 'Film Magic', is a Posse mit Gesang in four scenes by Walter Kollo and Willy Bredschneider, with a German libretto by Rudolf Bernauer and Rudolph Schanzer. A parody of silent films, Filmzauber premiered in Berlin in 1912. An English version, The Girl on the Film, translated and adapted by James T. Tanner with additional music by Albert Szirmai, premiered in London in 1913 and was later performed in New York and elsewhere.

Lt. Robin Crusoe U.S.N. is a 1966 comedy film released and scripted by Walt Disney, and starring Dick Van Dyke as a U.S. Navy pilot who becomes a castaway on a tropical island. Some filming took place in San Diego, while a majority of the film was shot on Kauai, Hawaii.

The IEEE Medal of Honor is the highest recognition of the Institute of Electrical and Electronics Engineers (IEEE). It has been awarded since 1917, when its first recipient was Major Edwin H. Armstrong. It is given for an exceptional contribution or an extraordinary career in the IEEE fields of interest. The award consists of a gold medal, bronze replica, certificate and honorarium. The Medal of Honor may only be awarded to an individual.

Walter Miller was an American actor of the silent era and the early sound era. He appeared in nearly 250 films between 1911 and 1940. He was born in Dayton, Ohio, and died in Hollywood, California, from a heart attack, aged 48. He is buried at Calvary Cemetery in Evanston, Illinois.

Emily "Emmy" Wehlen (1887–1977) was a German-born Edwardian musical comedy and silent film actress who vanished from the public eye while in her early thirties.

Miss Robin Crusoe is a low-budget 1953 American adventure film produced and directed by Eugene Frenke and starring Amanda Blake, George Nader and Rosalind Hayes. One of many film variations of Daniel Defoe's 1719 novel Robinson Crusoe, it features a female castaway.

One of Many is a 1917 American film written and directed by Christy Cabanne, starring Frances Nelson with Niles Welch, Mary Mersch, Caroline Harris and Harold Entwistle.

The Trail of the Shadow is a lost 1917 American silent drama film. Directed by Edwin Carewe, the film stars Emmy Wehlen, William B. Davidson, and Harry S. Northrup. It was released on June 18, 1917.

Sylvia on a Spree is a lost 1918 American silent comedy film directed by Harry L. Franklin and starring Emmy Wehlen, W. I. Percival, and Frank Currier. It was released on December 16, 1918.

Draft 258 is a 1917 American silent drama film directed by Christy Cabanne. It stars Mabel Taliaferro, Walter Miller, and Earl Brunswick, and was released on November 15, 1917.

The Duchess of Doubt is a 1917 American silent comedy film, directed by George D. Baker. It stars Emmy Wehlen, Ricca Allen, and Frank Currier, and was released on May 28, 1917.

The Outsider is a 1917 American silent drama film directed by William C. Dowlan. It stars Emmy Wehlen, Herbert Heyes, and Florence Short, and was released on November 5, 1917.

The House of Gold is a 1918 American silent drama film, directed by Edwin Carewe. It stars Emmy Wehlen, Joseph Kilgour, and Hugh Thompson, and was released on June 17, 1918.

The Belle of the Season is a 1919 American silent comedy-drama film, directed by S. Rankin Drew, and stars Emmy Wehlen, S. Rankin Drew, and Walter Hitchcock. It was originally scheduled to be released in 1917, but its premiere was delayed until July 28, 1919.

Charles Harold Entwistle was an actor on stage and in films, a manager of theaters and touring theater companies, and director from England who migrated to the United States and worked in Hollywood during and after the silent film era. In England he performed for the king and queen.