Morogoro is a town with a population of 315,866 (2012 census) in the eastern part of Tanzania, 196 kilometres (122 mi) west of Dar es Salaam, the country's largest city and commercial centre, and 260 kilometres (160 mi) east of Dodoma, the country's capital city. [3] Morogoro is the capital of the Morogoro Region. It is also known informally as "Mji kasoro bahari," which translates as "city short of an ocean/port."[ citation needed ]

Morogoro lies at the base of the Uluguru Mountains and is a centre of agriculture in the region. The Sokoine University of Agriculture is based in the city. A number of missions are also located in the city, providing schools and hospitals. Morogoro is home to the Amani Centre, which has helped over 3,400 disabled people in the surrounding villages. [4]

Eighty percent of the Morogoro's water supply comes from the Mindu Dam on the Ngerengere River. The dam project, begun in 1978, has been controversial. The lake behind the dam has led to high rates of bilharzia infection, [5] and mercury run-off from gold mining nearby the dam has polluted the city's water supply. [6] The dam is also being rapidly silted due to deforestation in the surrounding areas. [7]

In 2012-13 a $8.31m USAID/MCC-funded programme was implemented for the Morogoro Water Supply Authority (MORUWASA) to rehabilitate drinking water resources from the Uluguru Mountains with an inlet and treatment plant near the Regional Governance offices at the high end of the Boma Road.

A panorama of Morogoro Town showing the town and the activities of the people. The Nguru Mountains can be seen in the background.

Sokoine University of Agriculture, Muslim University of Morogoro, St Joseph and Jordan University College are located in Morogoro. Mzumbe University is located 26 km south of the town on the highway to Iringa. There are other famous colleges like Ardhi Institute Morogoro, Morogoro Teachers College, and LITI (Livestock Training Institute).

Public transport buses called dala dala are available for transport within the town, the fare are mostly around Tsh 400 from town to nearby area. Also for faster transportation motorcycles boda boda and Bajaj are the best within town areas; fare is depending on distance of the destination.

The city is represented in the Tanzanian Premier League by football club Mtibwa Sugar F.C.

Morogoro is the home of Salim Abdullah, who was the founder of the Cuban Marimba Band, and the Morogoro Jazz Band, another well-known band established in 1944. [9] From the mid-1960s to the 1970s, Morogoro was home to one of Tanzania's most influential and celebrated musicians, Mbaraka Mwinshehe, a lead guitarist and singer-songwriter. [9]

The city of Milwaukee in the state of Wisconsin in the United States is a sister city of Morogoro as designated by Sister Cities International. [10] Morogoro is also twinned with Linköping in Sweden and Vaasa in Finland.[ citation needed ]

On 10 August 2019, a fuel tanker exploded in the town, killing at least 71 people and injuring at least 70 others. [11] The event was one of the largest disasters of its kind to happen in Tanzania. [12] 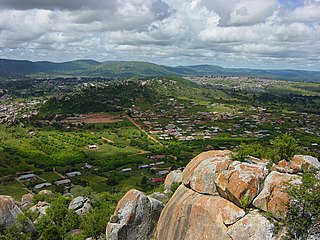 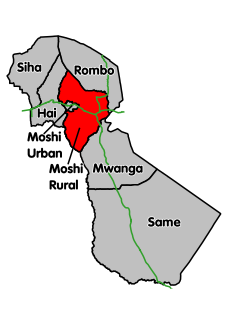 Tabora is the capital of Tanzania's Tabora Region and is classified as a municipality by the Tanzanian government. It is also the administrative seat of Tabora Urban District. According to the 2012 census, this district had a population of 226,999. 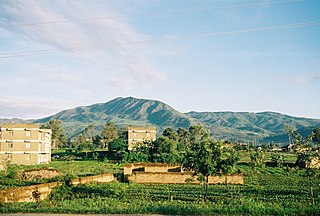 Mbeya is a city located in southwest Tanzania, Africa. Mbeya's urban population was 280,000 in 2005. Mbeya is the capital of the surrounding rural Mbeya region.

Arusha Region is one of Tanzania's 31 administrative regions. Its capital and largest city is the city of Arusha. The region is bordered by Kajiado County and Narok County in Kenya to the north, the Kilimanjaro Region to the east, the Manyara and Singida regions to the south, and the Mara and Simiyu regions to the west. Major towns include Monduli, Namanga, Longido, and Loliondo to the north, Mto wa Mbu and Karatu to the west, and Usa River to the east. The region is comparable in size to the combined land and water areas of the United States state of Maryland.

Morogoro Region is one of Tanzania's 31 administrative regions. The regional capital is the municipality of Morogoro. According to the 2012 national census, the region had a population of 2,218,492, which was higher than the pre-census projection of 2,209,072. For 2002–2012, the region's 2.4 percent average annual population growth rate was tied for the fourteenth highest in the country. It was also the 22nd most densely populated region with 31 people per square kilometer. 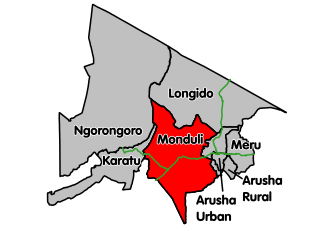 Monduli District is one of the seven districts of the Arusha Region of Tanzania. It is located in the northeastern section of the country. It is bordered to the north by Longido District, to the east by Arusha Rural District, to the south by the Manyara Region and to the west by Ngorongoro District and Karatu District. The town of Monduli is the administrative seat of the district. According to the 2002 Tanzania National Census, the population of the Monduli District was 185,237. By 2012, the population of the district was 158,929. The population decreased, as Longido District was split off.

Dala dala are minibus share taxis in Tanzania. Often overcrowded and operated at unsafe speeds, these minibuses developed as a response to an insufficient public transport system in the country. While the name may be a corruption of the English word "dollar", they are also referred to as thumni.

The Usambara Mountains of northeastern Tanzania in tropical East Africa, comprise the easternmost ranges of the Eastern Arc Mountains. The ranges of approximately 90 kilometres (56 mi) long and about half that wide, are situated in the Lushoto District of the Tanga Region. They were formed nearly two million years ago by faulting and uplifting, and are composed of Precambrian metamorphic rocks. They are split into two sub-ranges; the West Usambaras being higher than the East Usambaras, which are nearer the coast and receive more rainfall.

David Mathayo David is a Tanzanian CCM politician and Member of Parliament for Same West constituency since 2005. He is the current Minister of Livestock and Fisheries Development.

The Uluguru Mountains are a mountain range in eastern Tanzania, named after the Luguru tribe. The main portion of the Uluguru Mountains is a ridge running roughly north-south and rising to 2,630 metres (8,600 ft) altitude at its highest point. On the main Uluguru range, 50 villages touch the forest boundary and over 151,000 people are found within the mountain area, often at increasing densities at higher altitudes up to the forest boundary.

Mwatisi is a river of Tanzania. It flows through the Mbeya Region.

Ngerengere River is a river of the Morogoro Region of Tanzania. It rises in the Uluguru Mountains, and flows eastwards to join the Ruvu River at approximately 7.05085 S, 38.51571 E. The city of Morogoro is on the Ngerengere River.

The Solomon Mahlangu Freedom College (SOMAFCO), was an educational institution established by the exiled African National Congress (ANC) in 1978 at Mazimbu, Tanzania. Its purpose was to give the youth that had fled South Africa after the 1976 Soweto uprising and children of existing exiles a primary and secondary education, an alternative to traditional Bantu education system they would have received at home. It would teach both an academic and vocational education. Farmlands would supply food to the institution and would also include a hospital. It was officially opened by Oliver Tambo in 1985.

The Ruvu River is a river in eastern Tanzania.