Myal is an Afro-Jamaican spirituality. It developed via the creolization of African religions during the slave era in Jamaica. It incorporates ritualistic magic, spiritual possession and dancing. Unlike Obeah, its practices focus more on the connection of spirits with humans. [1] Over time, Myal began to meld with Christian practices and created the religious tradition known as Revivalism. [2]

The practice of Myal as a spirit possession originated in Jamaica. It derived from the Kongo religion. It was once theorized to be of Akan origin, because of its popularity with Akan slaves. However, Myal was also popular with Kongo slaves. The centrality of spirit possession is a core component of both Myal and Kongo religion. This evidence suggests that Myal is more closely related to Kongo. [3] Myalism resulted from the cooperation of ethnically diverse African slaves. [4] The term "Myal" was first recorded by Edward Long in 1774 when describing a ritual dance done by Jamaican slaves. At first, the practices of Obeah and Myal were not distinguished. Over time, "Myal-men" involved in spirit possession became involved with Jamaican Native Baptist churches and incorporated Myal rituals into them. Over time, these Myal-influenced churches began preaching the importance of baptisms and the eradication of Obeah, thus separating the two traditions. [5]

After the abolition of slavery, conservative Christian churches began to lose followers to Bedwardism and Myalist Native Baptist Churches. After 1814, the Myalist chapels started to become more visible. [6] By the 1840s, many Congolese indentured laborers arrived in Jamaica where they revitalised Myal practices and the Kumina religion. [7]

Myal was generally tolerated by slave owners because of its stance against Obeah and its adoption of Christian elements. By the 1860s, Myal-based churches became referred to as "Revivalist" churches and were established as Baptist churches. [8] From 1858 to 1859, a Christian revival swept Jamaica, adding energy to local religious life. Two branches of this revival, the 60 Order or Revival Zion and the 61 Order or Pocomania, emerged. Revival Zion adopted more orthodox Christian practices, while Pocomania continued more African practices. [9]

Myal as a separate religion is no longer practiced, its rituals can be found in Revivalism, Kumina, [10] and Convince. [7]

Myalists honor a creator god and ancestor or African spirits. These spirits are invoked in Myal rituals. It holds that a human has two souls: the duppy, which departs the Earth after death, and the second spirit, which acts as the person's shadow and needs protection from evil. [3] Under slavery, Myalists would ingest a mix of cold water and branched callaloo to induce an intoxicated state and then dance to commune with the spirits. [11]

Hoodoo is a set of spiritual practices, traditions, and beliefs created by African slaves in North America that were held in secret from slaveholders. Hoodoo evolved from various traditional African religions and practices, and in the American South, incorporated various elements of indigenous botanical knowledge. Hoodoo is also known as "Lowcountry Voodoo" in the Gullah South Carolina Lowcountry. Following the Great Migration of African-Americans, Hoodoo spread throughout the United States.

Jamaican culture consists of the religion, norms, values, and lifestyle that define the people of Jamaica. The culture is mixed, with an ethnically diverse society, stemming from a history of inhabitants beginning with the original Taino people. The Spaniards originally brought slavery to Jamaica. Then they were overthrown by the English. Jamaica later gained emancipation on 1 August 1838, and independence from the British on 6 August 1962. Black slaves became the dominant cultural force as they suffered and resisted the harsh conditions of forced labour. After the abolition of slavery, Chinese and Indian migrants were transported to the island as indentured workers, bringing with them ideas from the Far East. These contributions resulted in a diversity that affected the language, music, dance, religion, and social norms and practices of the Jamaicans. 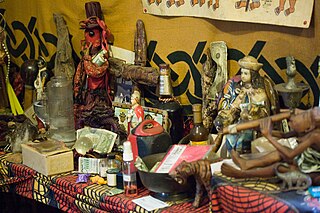 African diaspora religions are a number of related religions that developed in the Americas in various nations of the Caribbean, Latin America, and the Southern United States. They derive from traditional African religions with some influence from other religious traditions, notably Christianity.

Obeah is a system of spiritual healing and justice-making practices developed among enslaved West Africans in the West Indies. Obeah is difficult to define, as it is not a single, unified set of practices; the word "Obeah" was historically not often used to describe one's own practices.

Palo, also known as Palo Monte and Las Reglas de Congo, is an African diasporic religion that developed in Cuba. It arose through a process of syncretism between the traditional Kongo religion of Central Africa, the Roman Catholic form of Christianity, and Spiritism. Initiates in the religion are termed paleros (male) or paleras (female).

Kumina is an Afro-Jamaican religion and practices that include secular ceremonies, dance and music that developed from the beliefs and traditions brought to the island by Kongo enslaved people and indentured labourers, from the Congo region of West Central Africa, during the post-emancipation era. It is mostly associated with the parish of St. Thomas in the east of the island. However, the practice spread to the parishes of Portland, St. Mary and St. Catherine, and the city of Kingston.

Espiritismo is a term used in Latin America and the Caribbean to refer to the popular belief that good and evil spirits can affect health, luck and other aspects of human life.

Jamaican Maroon language, Maroon Spirit language, Kromanti, Jamaican Maroon Creole or Deep patwa is a ritual language and formerly mother tongue of Jamaican Maroons. It is an English-based creole with a strong Akan component, specifically from the Fante dialect of the Central Region of Ghana. It is distinct from usual Jamaican Creole, being similar to the creoles of Sierra Leone (Krio) and Suriname such as Sranan and Ndyuka. It is also more purely Akan than regular Patois, with little to no contribution from other African languages. Today, the Maroon Spirit language is used by Jamaican Maroons. Another distinct ritual language consisting mostly of words and phrases from Akan languages, is also used by Jamaican Maroons in certain rituals including some involving possession by ancestral spirits during Kromanti ceremonies or when addressing those who are possessed and sometimes used as a kind of code.

Religion in Jamaica, according to the census of 2001, consists of a breakdown of 66% Christian. 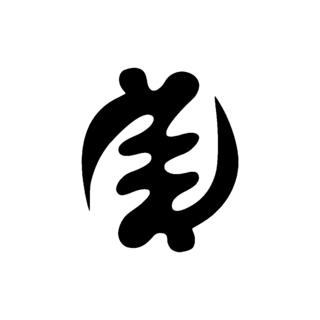 Akan religion comprises the traditional beliefs and religious practices of the Akan people of Ghana and eastern Ivory Coast. Akan religion is referred to as Akom. Although most Akan people have identified as Christians since the early 20th century, Akan religion remains practiced by some and is often syncretized with Christianity. The Akan have many subgroups, so the religion varies greatly by region and subgroup. Similar to other traditional religions of West and Central Africa such as West African Vodun, Yoruba religion, or Odinani, Akan cosmology consists of a senior god who generally does not interact with humans and many gods who assist humans.

Igbo people in Jamaica were shipped by Europeans onto the island between the 18th and 19th centuries as enslaved labour on plantations. Igbo people constituted a large portion of the African population enslaved people in Jamaica. Some slave censuses detailed the large number of enslaved Igbo people on various plantations throughout the island on different dates throughout the 18th century. Their presence was a large part in forming Jamaican culture, Igbo cultural influence remains in language, dance, music, folklore, cuisine, religion and mannerisms. In Jamaica the Igbo were often referred to as Eboe or Ibo. There are a substantial number of Igbo language loanwords in Jamaican Patois, however the majority of African loanwords in Jamaican Patois are from the Akan language of modern-day Ghana. Igbo people mostly populated the northwestern section of the island.

Nyabinghi or Nyabingi is a prominent figure in the history of Rwanda, Uganda and Tanzania, where religions or 'possession cults' formed around her. 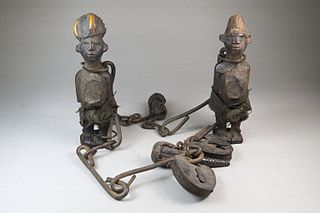 Kongo religion is a broad set of traditional beliefs from the KiKongo speaking peoples. The faith bases itself in the idea of a main creator god named Nzambi Mpungu who made the world and spirits who inhabit it. Priestly doctors known as Nganga try to heal followers' minds and bodies. Mediatory roles like being a Nganga require legitimization from the other world of spirits and ancestors. The universe is split between two worlds, one of the living and a world of the dead, these worlds are split by a body of water. Humans continually pass through these worlds in cycle.

The traditional Jamaican Maroon religion, otherwise known as Kumfu, was developed by a mixing of West and Central African religious practices in Maroon communities. While the traditional religion of the Maroons was absorbed by Christianity due to conversions in Maroon communities, many old practices continued on. Some have speculated that Jamaican Maroon religion helped the development of Kumina and Convince. The religious Kromanti dance is still practiced today but not always with the full religious connotation as in the past.

Convince, also known as Bongo or Flenke, is a religion from eastern Jamaica. It has roots in Kumina and Jamaican Maroon religion.

Kromanti dance or Kromanti play is a Jamaican Maroon religious ceremony practiced by Jamaican Maroons. It is rooted in traditional African music and religious practices, especially those of the Akan people of Ghana. The name Kromanti derives from Kormantin where a historical slave fort in the coast of Ghana was located. Many slaves shipped to Jamaica during the Atlantic Slave trade originated from present–day Ghana in West Africa.