Last updated September 21, 2021
People who are both African-American and Jewish

Jews with African ancestry have lived in the Americas since the colonial era. Before the 1820s, the largest Jewish communities were in the Caribbean, as were the largest communities of Jews with ancestral ties to Africa. [1] Of the Caribbean Jewish communities, Suriname had the most sizable African American Jewish population. European Jews in Suriname converted both people they enslaved and the children of Jewish men and women of color. [2] Incorporation of enslaved people into Judaism was so important that in 1767/68, Dutch Jew Salomon Levy Maduro published Sefer Brit Itschak, which contained the names of seven ritual circumcisers in Suriname along with prayers for converting and circumcising enslaved people. [3] Although initially most Afro-Surinamese people entered Judaism through conversion, by the end of the eighteenth century, many members of the African American Jewish community had been Jews from birth for several generations. [2]

By 1759, Afro-Surinamese Jews (sometimes referred to by scholars as "Eurafrican Jews") had formed their own brotherhood called Darhe Jesarim ("Path of the Righteous"). Darhe Jesarim both educated Jews of color and provided a place where Afro-Surinamese Jews could worship without the inequities and distinctions made in Paramaribo's Neveh Shalom and Tzedek ve-Shalom congregations. In 1817, Darhe Jesarim was disbanded and its members were absorbed back into the city's two white-run synagogues. [2] Late eighteenth-century census takers tabulated that 10% of Suriname's Jewish community was non-white. [2] One historian has suggested, however, that by the end of the eighteenth century the majority of Jews in Suriname may have had at least one African ancestor, even if they were considered white at the time. [2] Famous Surinamese artists and figures with Jewish ancestry include Maria Louisa de Hart, Augusta Curiel, and Josef Nassy.

During the nineteenth and twentieth centuries some members of Suriname's community travelled north, and settled in North American cities. For example in 1857, a German-Jewish journalist interviewed several African American women who worshipped at Congregation Shearith Israel in New York who had immigrated from Suriname. [4] Other early African American Jews also came to the United States from Jamaica [4] and Barbados. [5] The portraits of Sarah Brandon Moses and Isaac Lopez Brandon, both born enslaved in Barbados, are the oldest known paintings of Jews with African Ancestry. [5] Caribbean Jews both became members of white-run Jewish synagogues in the United States and helped form early African American synagogues in Harlem in the first part of the twentieth century.

Several historic Jewish congregations in the United States mention early African American worshippers. [6] Lucy Marks (?-1838), who lived with and worked for the Marks family of Philadelphia, was known as a "devout observer of the precepts of Judaism" and sat in the women's section of Mikveh Israel during services. Upon her death, the Marks family successfully petitioned to have her buried in the Spruce Street Cemetery, where today she rests in an unmarked grave next to Haym Salomon. [7] Billy Simmons (?-1860) attended services at Beth Elohim in Charleston, South Carolina, even though its constitution forbid people with African ancestry from being members. [8] [6]

By the first part of the twentieth century, at least eight different African American run religious organizations self-identified as Jewish. Most traced connections either to the Caribbean or Ethiopia. [6] Today African American Jews worship both in predominantly African-American synagogues and predominantly mixed congregations.

Robin Washington, an American journalist and filmmaker, became one of three founders of the National Conference of Black Jews, later called the Alliance of Black Jews. It was conceived to build bridges among all African-American Jews, who are affiliated with many different groups. Estimates of the number of black Jews in the United States range from 20,000 [10] to 200,000. [11]

There are several predominantly African-American synagogues in the United States, such as Beth Shalom B'nai Zaken Ethiopian Hebrew Congregation, which is a synagogue in Chicago, Illinois. The congregation leader of Beth Shalom is Rabbi Capers Funnye. Its assistant rabbis are Avraham Ben Israel and Joshua V. Salter. [12] The congregation, which has about 200 members, is mostly African American. [13] [14] The congregation was started by Rabbi Horace Hasan from Bombay (now Mumbai), India, in 1918 as the Ethiopian Hebrew Settlement Workers Association, [15] and it was influenced by Wentworth Arthur Matthew's Commandment Keepers. [13] [14]

Robin Washington is an American journalist and filmmaker, born in Chicago in 1956. As a journalist and editor, he was worked for newspapers in Boston and Duluth, Minnesota, as well as for NPR. He has made documentaries about the civil rights movement and the lives of African Americans in the United States.

The Church of God and Saints of Christ is a Black Hebrew Israelite religious group established in Lawrence, Kansas, by William Saunders Crowdy in 1896. William Crowdy began congregations in several cities in the Midwestern and Eastern United States, and sent an emissary to organize locations in at least six African countries. The congregation later established locations in Cuba and the West Indies.

Ben Ammi Ben-Israel was the American-born founder and spiritual leader of the African Hebrew Israelites of Jerusalem.

Valley Beth Shalom is a Conservative synagogue in Encino, Los Angeles, California. With approximately 1,500 member families it is one of the largest synagogues in Los Angeles and one of the largest Conservative synagogues in the United States. Newsweek includes it on its list of America's 25 Most Vibrant Congregations, saying "Valley Beth Shalom continues to be one of America's most relevant and community-minded synagogues."

The baal teshuva movement is a description of the return of secular Jews to religious Judaism. The term baal teshuva is from the Talmud, literally meaning "master of repentance". The term is used to refer to a worldwide phenomenon among the Jewish people. It is distinct from the Jewish Renewal movement, which is not Orthodox.

Wentworth Arthur Matthew, a West Indian immigrant to New York City, was the founder in 1919 of the Commandment Keepers of the Living God, a Black Hebrew congregation. It was influenced by the pan-Africanism and black nationalism of Marcus Garvey from Jamaica. Matthew developed his congregation along Jewish lines of observance and the theory that they were returning to Judaism as the true Hebrews. He incorporated in 1930 and moved the congregation to Brooklyn. There he founded the Israelite Rabbinical Academy, teaching and ordaining African-American rabbis. His theory of Black Hebrews is not accepted by Jews.

Congregation Rodeph Shalom of Philadelphia, founded in 1795, is the oldest Ashkenazic synagogue in the Western Hemisphere. It is noted historically for its leadership of the Reform Judaism among American Hebrew congregations, for its spiritual influence upon international Jewry, and for its unique 1927 Moorish Revival building on North Broad Street, on the National Register of Historic Places for many decades.

Congregation Beth Israel is an egalitarian Conservative synagogue located at 989 West 28th Avenue in Vancouver, British Columbia. It was founded in 1925, but did not formally incorporate until 1932. Its first rabbi was Ben Zion Bokser, hired that year. He was succeeded the following year by Samuel Cass (1933–1941). Other rabbis included David Kogen (1946–1955), Bert Woythaler (1956–1963), and Wilfred Solomon, who served for decades starting in 1964.

The Neveh Shalom Synagogue is the only synagogue of the Ashkenazi community in Suriname.

The first openly lesbian, gay, bisexual, and transgender clergy in Judaism were ordained as rabbis and/or cantors in the second half of the 20th century.

Temple Israel is the oldest synagogue in Columbus, Ohio, and a founding member of the Union for Reform Judaism. Formed as early as 1846 as the Orthodox Bene Jeshurun congregation, its first religious leader was Simon Lazarus, a clothing merchant who founded what would become Lazarus department stores.

African Americans and Jewish Americans have interacted throughout much of the history of the United States. This relationship has included widely publicized cooperation and conflict, and—since the 1970s—has been an area of significant academic research. Cooperation during the Civil Rights Movement was strategic and significant, culminating in the Civil Rights Act of 1964.

Dana Evan Kaplan is a Reform rabbi known for his writings on Reform Judaism and American Judaism. He has also written on other subjects, including American Jewish history and Jews in various diaspora communities. Kaplan has been the rabbi of Temple Beth Shalom of the West Valley in Sun City, Arizona, since June 2019.

The history of the Jews in Suriname starts in 1639, as the English government allowed Spanish and Portuguese Jews from the Netherlands, Portugal and Italy to settle the region, coming to the old capital Torarica. 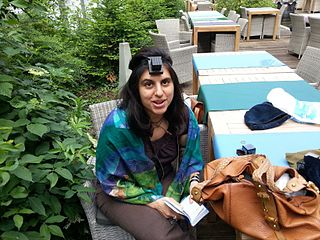 This is a timeline of women rabbis.

Beit Emanuel Progressive Synagogue is a progressive synagogue located in Parktown, Johannesburg. The synagogue was established in 1954 and is one of the largest progressive Jewish congregations in South Africa. Israeli-born, Rabbi Sa'ar Shaked has been Beit Emanuel's congregational rabbi since 2013. It is an affiliate of the South African Union for Progressive Judaism (SAUPJ), which is part of the World Union for Progressive Judaism (WUPJ). Congregational rabbi, Shaked is currently involved in efforts to establish a Rabbinic Academy and Higher Education Institution in Gauteng.