Nano (NANO) is a peer-to-peer digital currency. It is a decentralized, open-source cryptocurrency based on directed acyclic graph (DAG) architecture with an Open Representative Voting (ORV) consensus mechanism. It operates without intermediaries by using a distributed ledger with a block-lattice data structure. [1] [ unreliable source? ] [2]

Nano was launched in October 2015 by Colin LeMahieu, with the aim of addressing blockchain scalability limitations that can result in restrictive fees and increased transaction confirmation times under load. [3] It has feeless transactions that typically achieve full confirmation in under one second. [4]

On 9 February 2018, the Italian cryptocurrency exchange BitGrail announced its shutdown after being hacked. There were unaccounted losses of 17 million Nano from its wallets, preventing users from accessing assets stored on the platform. [8] The victims sought recoupment through the Italian court system, and supported by the Nano Foundation, launched a class-action suit against BitGrail owner Francesco Firano. In January 2019, the Court of Florence found Firano liable for the losses after discovering that the exchange had failed to implement any meaningful safeguards to ensure the safety of their customers' funds and failed to report losses from as early as July 2017. [9]

Nano uses a block-lattice data structure, where every account has its own blockchain (account-chain). [10] [ non-primary source needed ] It is the first cryptocurrency created on a directed acyclic graph (DAG), [11] [ unreliable source? ] where a "block" is just one transaction, and each transaction contains the account's current balance. [12] [ unreliable source? ] [10]

Consensus is reached through an algorithm similar to proof of stake named Open Representative Voting (ORV). In this system, the voting weight is distributed to accounts based on the amount of NANO they hold: accounts then freely delegate this weight to a node of their choice. In the event that two contradictory transactions are broadcast to the network (as in a double spend attempt), nodes vote for one of them and broadcast their vote to the other nodes. The first transaction to reach 67% of the total voting weight is confirmed, and the other discarded. [13]

This architecture allows Nano to function without direct monetary incentives to users or validators. Because certain entities benefit from the network indirectly (cryptocurrency exchanges through trading fees, merchants avoiding the fees associated with credit card companies, etc.), there is an interest to keep it healthy and decentralized by running a node. Since there is no direct incentive to accumulate voting weight, this also helps avoid the centralizing tendencies inherent to economies of scale such as traditional proof of work and proof of stake architectures. [14]

Proof of stake (PoS) protocols are a class of consensus mechanisms for blockchains that work by selecting validators in proportion to their quantity of holdings in the associated cryptocurrency. Unlike a proof of work (PoW) protocol, PoS systems do not incentivize extreme amounts of energy consumption. The first functioning use of PoS for cryptocurrency was Peercoin in 2012. The biggest proof-of-stake blockchain by market capitalization is Cardano.

Ethereum is a decentralized, open-source blockchain with smart contract functionality. Ether is the native cryptocurrency of the platform. Amongst cryptocurrencies, it is second only to Bitcoin in market capitalization.

NXT is an open source cryptocurrency and payment network launched in 2013 by anonymous software developer BCNext. It uses proof-of-stake to reach consensus for transactions—as such there is a static money supply. Unlike Bitcoin, there is no mining. NXT was specifically conceived as a flexible platform around build applications and financial services, and serves as basis for ARDR (Ardor), a blockchain-as-a-service multi-chain platform developed by Jelurida, and IoTeX (cryptocurrency) the current steward of Nxt as of 2021. NXT has been covered extensively in the "Call for Evidence" report by ESMA.

Dash is an open source cryptocurrency. It is an altcoin that was forked from the Bitcoin protocol. It is also a decentralized autonomous organization (DAO) run by a subset of its users, which are called "masternodes".

A blockchain is a growing list of records, called blocks, that are linked together using cryptography. It's also described as a "trustless and fully decentralized peer-to-peer immutable data storage" that is spread over a network of participants often referred to as nodes. Each block contains a cryptographic hash of the previous block, a timestamp, and transaction data. The timestamp proves that the transaction data existed when the block was published in order to get into its hash. As blocks each contain information about the block previous to it, they form a chain, with each additional block reinforcing the ones before it. Therefore, blockchains are resistant to modification of their data because once recorded, the data in any given block cannot be altered retroactively without altering all subsequent blocks.

Hyperledger is an umbrella project of open source blockchains and related tools, started in December 2015 by the Linux Foundation, and has received contributions from IBM, Intel and SAP Ariba, to support the collaborative development of blockchain-based distributed ledgers.

A distributed ledger is a consensus of replicated, shared, and synchronized digital data geographically spread across multiple sites, countries, or institutions. Unlike with a centralized database, there is no central administrator.

Neo is an open-source decentralized blockchain decentralized application platform founded in 2014 by Da HongFei and Erik Zhang. Since its rebranding to Neo from Antshares in 2017, the project's vision is to realize a "smart economy" by utilizing blockchain technology and smart contracts to issue and manage digitized assets.

IOTA is an open-source distributed ledger and cryptocurrency designed for the Internet of things (IoT). It uses a directed acyclic graph to store transactions on its ledger, motivated by a potentially higher scalability over blockchain based distributed ledgers. IOTA does not use miners to validate transactions, instead, nodes that issue a new transaction on the network must approve two previous transactions. Transactions can therefore be issued without fees, facilitating microtransactions. The network currently achieves consensus through a coordinator node, operated by the IOTA Foundation. As the coordinator is a single point of failure, the network is currently centralized.

A blockchain is a shared database that records transactions between two parties in an immutable ledger. Blockchains document and confirm pseudonymous ownership of all existing coins within a cryptocurrency ecosystem at any given time through cryptography. After a transaction is validated and cryptographically verified by other participants or nodes in the network, it is made into a "block" on the blockchain. A block contains information about the time the transaction occurred, previous transactions, and details about the transaction. Once recorded as a block, transactions are ordered chronologically and cannot be altered. This technology rose to popularity after the creation of Bitcoin, the first application of blockchain technology, which has since catalyzed other cryptocurrencies and applications. 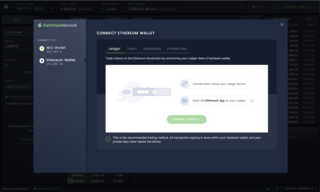 Decentralized exchanges (DEX) are a type of cryptocurrency exchange which allows for direct peer-to-peer cryptocurrency transactions to take place online securely and without the need for an intermediary.

Robert A. Küfner is a German entrepreneur, author and investor. He is mentioned as a pioneer in the field of Bitcoin and blockchain technology.

Decentralized finance is a blockchain-based form of finance that does not rely on central financial intermediaries such as brokerages, exchanges, or banks to offer traditional financial instruments, and instead utilizes smart contracts on blockchains, the most common being Ethereum. DeFi platforms allow people to lend or borrow funds from others, speculate on price movements on a range of assets using derivatives, trade cryptocurrencies, insure against risks, and earn interest in savings-like accounts. DeFi uses a layered architecture and highly composable building blocks. Some DeFi applications promote high interest rates but are subject to high risk. By October 2020, over $11 billion was deposited in various decentralized finance protocols, which represented more than a tenfold growth during the course of 2020. As of January 2021, approximately $20.5 billion was invested in DeFi.

Algorand is a blockchain-based cryptocurrency platform that aims to be secure, scalable, and decentralized. The Algorand platform supports smart contract functionality, and its consensus algorithm is based on proof-of-stake principles and a Byzantine Agreement protocol. Algorand's native cryptocurrency is called Algo.