Last updated June 23, 2021
The tendency of the brain to prefer visual input from one eye to the other

Ocular dominance, sometimes called eye preference or eyedness, [1] is the tendency to prefer visual input from one eye to the other. [2] It is somewhat analogous to the laterality of right- or left-handedness; however, the side of the dominant eye and the dominant hand do not always match. [3] This is because both hemispheres control both eyes, but each one takes charge of a different half of the field of vision, and therefore a different half of both retinas (See Optic Tract for more details). There is thus no direct analogy between "handedness" and "eyedness" as lateral phenomena. [4]

Approximately 69.42% of the population are right-eye dominant and 29% left-eye dominant. [1] [5] [6] [7] Dominance does appear to change depending upon direction of gaze [2] [8] due to image size changes on the retinas. [9] There also appears to be a higher prevalence of left-eye dominance in those with Williams–Beuren syndrome, [10] and possibly in migraine sufferers as well. [11] Eye dominance has been categorized as "weak" or "strong"; [12] highly profound cases are sometimes caused by amblyopia or strabismus.

In those with anisometropic myopia (different amounts of nearsightedness between the two eyes), the dominant eye has typically been found to be the one with more myopia. [13] [14] As far as regards subjects with normal binocular vision, the widespread notion that the individual's better-sighted eye would tend to be the dominant eye has been challenged as lacking empirical basis. [15]

Dominance can change and may switch between the eyes depending on the task and physical condition of the subject (i.e. fatigue).[ citation needed ]

In normal binocular vision there is an effect of parallax, and therefore the dominant eye is the one that is primarily relied on for precise positional information. This may be extremely important in sports which require aim, such as archery, darts or shooting sports.

It has been asserted that cross-dominance (in which the dominant eye is on one side and the dominant hand is on the other) is advantageous in sports requiring side-on stances (e.g. baseball, cricket, golf); [16] however, studies within the last 20 years have shown this not to be the case. In a 1998 study of professional baseball players, hand–ocular dominance patterns did not show an effect on batting average or ERA. [17] Similarly, in 2005, a South African study found that "cricketers were not more likely to have crossed dominance" than the normal population. [18]

The dominant eye has more neural connections to the brain than the other eye does. According to a sixty-person study in the Proceedings of the Royal Society B, in non-dyslexic people, the blue cone-free spot in the dominant eye tends to be round and the same spot in the non-dominant eye tends to be unevenly shaped; in dyslexic people both eyes tend to have round areas. [20] The study suggests this difference may be a potential, and possibly treatable, cause of dyslexia; however, further tests are required to confirm. At least 700 million people worldwide have dyslexia. In response to the study, John Stein of the University of Oxford cautions that while the study is "really interesting", there is no one single cause of dyslexia. [21] [22]

A person's dominant eye "is determined by subjective alignment of two objects presented at a stereodisparity far beyond Panum's area". [23] There are a number of ways to do this:

Forced choice tests of dominance, such as the Dolman method, allow only a right or left eye result. [13]

Near-sightedness, also known as short-sightedness and myopia, is an eye disorder where light focuses in front of, instead of on, the retina. This causes distant objects to be blurry while close objects appear normal. Other symptoms may include headaches and eye strain. Severe near-sightedness is associated with an increased risk of retinal detachment, cataracts, and glaucoma.

Esotropia is a form of strabismus in which one or both eyes turns inward. The condition can be constantly present, or occur intermittently, and can give the affected individual a "cross-eyed" appearance. It is the opposite of exotropia and usually involves more severe axis deviation than esophoria. Esotropia is sometimes erroneously called "lazy eye", which describes the condition of amblyopia—a reduction in vision of one or both eyes that is not the result of any pathology of the eye and cannot be resolved by the use of corrective lenses. Amblyopia can, however, arise as a result of esotropia occurring in childhood: In order to relieve symptoms of diplopia or double vision, the child's brain will ignore or "suppress" the image from the esotropic eye, which when allowed to continue untreated will lead to the development of amblyopia. Treatment options for esotropia include glasses to correct refractive errors, the use of prisms and/or orthoptic exercises and/or eye muscle surgery. The term is from Greek eso meaning "inward" and trope meaning "a turning".

In biology, binocular vision is a type of vision in which an animal has two eyes capable of facing the same direction to perceive a single three-dimensional image of its surroundings. Neurological researcher Manfred Fahle has stated six specific advantages of having two eyes rather than just one:

LASIK or Lasik, commonly referred to as laser eye surgery or laser vision correction, is a type of refractive surgery for the correction of myopia, hyperopia, and astigmatism. LASIK surgery is performed by an ophthalmologist who uses a laser or microkeratome to reshape the eye's cornea in order to improve visual acuity. For most people, LASIK provides a long-lasting alternative to eyeglasses or contact lenses. 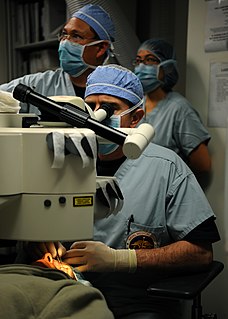 Photorefractive keratectomy (PRK) and laser-assisted sub-epithelial keratectomy (LASEK) are laser eye surgery procedures intended to correct a person's vision, reducing dependency on glasses or contact lenses. LASEK and PRK permanently change the shape of the anterior central cornea using an excimer laser to ablate a small amount of tissue from the corneal stroma at the front of the eye, just under the corneal epithelium. The outer layer of the cornea is removed prior to the ablation.

Strabismus is a condition in which the eyes do not properly align with each other when looking at an object. The eye that is focused on an object can alternate. The condition may be present occasionally or constantly. If present during a large part of childhood, it may result in amblyopia or lazy eyes and loss of depth perception. If onset is during adulthood, it is more likely to result in double vision.

Amblyopia, also called lazy eye, is a disorder of sight in which the brain fails to process inputs from one eye and over time favors the other eye. It results in decreased vision in an eye that otherwise typically appears normal. Amblyopia is the most common cause of decreased vision in a single eye among children and younger adults.

Anisometropia is when two eyes have unequal refractive power. Generally a difference in power of two diopters or more is the accepted threshold to label the condition anisometropia. 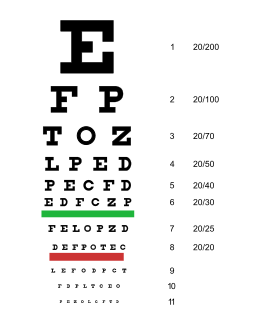 An eye examination is a series of tests performed to assess vision and ability to focus on and discern objects. It also includes other tests and examinations pertaining to the eyes. Eye examinations are primarily performed by an optometrist, ophthalmologist, orthoptist, or an optician. Health care professionals often recommend that all people should have periodic and thorough eye examinations as part of routine primary care, especially since many eye diseases are asymptomatic.

Astigmatism is a type of refractive error in which the eye does not focus light evenly on the retina, due to a variation in the optical power of the eye for light coming from different directions. This results in distorted or blurred vision at any distance. Other symptoms can include eyestrain, headaches, and trouble driving at night. Astigmatism usually occurs at birth, but can sometimes develop later in life. If it occurs in early life and is left untreated, it can result in amblyopia.

Strabismus surgery is surgery on the extraocular muscles to correct strabismus, the misalignment of the eyes. Strabismus surgery is a one-day procedure that is usually performed under general anesthesia most commonly by either a neuro- or pediatric ophthalmologist. The patient spends only a few hours in the hospital with minimal preoperative preparation. After surgery, the patient should expect soreness and redness but is generally free to return home.

Aniseikonia is an ocular condition where there is a significant difference in the perceived size of images. It can occur as an overall difference between the two eyes, or as a difference in a particular meridian. If the ocular image size in both eyes are equal, the condition is known as iseikonia.

Infantile esotropia is an ocular condition of early onset in which one or either eye turns inward. It is a specific sub-type of esotropia and has been a subject of much debate amongst ophthalmologists with regard to its naming, diagnostic features, and treatment.

Chromostereopsis is a visual illusion whereby the impression of depth is conveyed in two-dimensional color images, usually of red-blue or red-green colors, but can also be perceived with red-grey or blue-grey images. Such illusions have been reported for over a century and have generally been attributed to some form of chromatic aberration.

Laser blended vision is a sophisticated laser eye treatment which is used to treat presbyopia or other age-related eye conditions. It can be used to help people that simply need reading glasses, and also those who have started to need bifocal or varifocal spectacle correction due to ageing changes in the eye. It can be used for people who are also short-sighted (myopia) or long-sighted (hyperopia) and who also may have astigmatism.

Peter S. Hersh is an American ophthalmologist and specialist in LASIK eye surgery, keratoconus, and diseases of the cornea. He co-authored the article in the journal Ophthalmology that presented the results of the study that led to the first approval by the U.S. Food and Drug Administration (FDA) of the excimer laser for the correction of nearsightedness in the United States. Hersh was also medical monitor of the study that led to approval of corneal collagen crosslinking for the treatment of keratoconus.

The eye, like any other optical system, suffers from a number of specific optical aberrations. The optical quality of the eye is limited by optical aberrations, diffraction and scatter. Correction of spherocylindrical refractive errors has been possible for nearly two centuries following Airy's development of methods to measure and correct ocular astigmatism. It has only recently become possible to measure the aberrations of the eye and with the advent of refractive surgery it might be possible to correct certain types of irregular astigmatism.

The management of strabismus may include the use of drugs or surgery to correct the strabismus. Agents used include paralytic agents such as botox used on extraocular muscles, topical autonomic nervous system agents to alter the refractive index in the eyes, and agents that act in the central nervous system to correct amblyopia.