Situs solitus is the medical term referring to the normal position of thoracic and abdominal organs. Anatomically, this means that the heart is on the left with the pulmonary atrium on the right and the systemic atrium on the left along with the cardiac apex. Right-sided organs are the liver, the gall bladder and a trilobed lung as well as the inferior vena cava, while left-sided organs are the stomach, single spleen, a bilobed lung, and the aorta. [1]

Variants on the normal picture are relatively uncommon. Complete reversal of all organs is known as situs inversus, while reversal of some organs but not others is called situs ambiguus or heterotaxy. Isolated reversal of the heart with normally-patterned viscera otherwise is termed dextrocardia.

Although much of humans' external anatomy is bilaterally symmetric, many internal structures must be signaled to develop asymmetrically in order to form the normal situs solitus orientation. This induced asymmetry is thought to be achieved by a number of morphological factors that guide development. For instance, different levels of NODAL proteins on opposite sides of the embryo have been linked to proper bending of the embryonic heart, giving it its asymmetrical form. [2] As for the question as to how these development-guiding proteins themselves become distributed asymmetrically throughout the embryo, a certain type of embryonic node cell has been identified with cilia known as nodal cilia that move only in a counter-clockwise orientation, thus potentially producing a sort of 'current' in the embryo that would asymmetrically distribute these molecules. [1] [3] 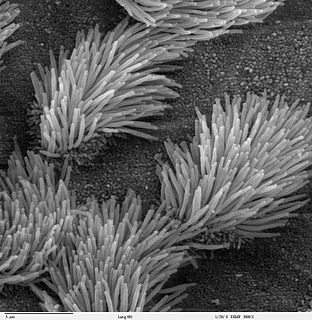 The cilium is an organelle found on eukaryotic cells in the shape of a slender protuberance that projects from the much larger cell body. 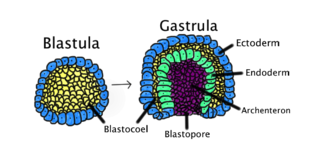 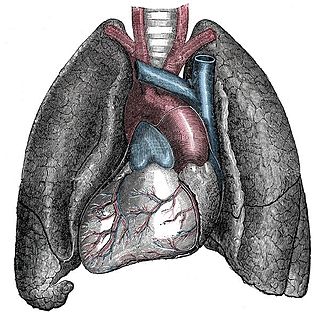 Situs inversus is a congenital condition in which the major visceral organs are reversed or mirrored from their normal positions. The normal arrangement of internal organs is known as situs solitus. Although cardiac problems are more common, many people with situs inversus have no medical symptoms or complications resulting from the condition, and until the advent of modern medicine, it was usually undiagnosed.

Primary ciliary dyskinesia (PCD), is a rare, ciliopathic, autosomal recessive genetic disorder that causes defects in the action of cilia lining the respiratory tract, fallopian tube, and flagellum of sperm cells. The phrase "immotile ciliary syndrome" is no longer favored as the cilia do have movement, but are merely inefficient or unsynchronized.

Situs ambiguus is a rare congenital defect in which the major visceral organs are distributed abnormally within the chest and abdomen. Heterotaxy in general refers to any defect of left-right laterality and arrangement of the visceral organs. This does not include the congenital defect situs inversus, which results when arrangement of all the organs in the abdomen and chest are mirrored, so the positions are opposite the normal placement. Situs inversus is the mirror image of situs solitus, which is normal asymmetric distribution of the abdominothoracic visceral organs. Situs ambiguus can also be subdivided into left-isomerism and right isomerism based on the defects observed in the spleen, lungs and atria of the heart.

Lefty are a class of proteins that are closely related members of the TGF-beta superfamily of growth factors. These proteins are secreted and play a role in left-right asymmetry determination of organ systems during development. Mutations of the genes encoding these proteins have been associated with left-right axis malformations, particularly in the heart and lungs.

The heart is the first functional organ in a vertebrate embryo. There are 5 stages to heart development. 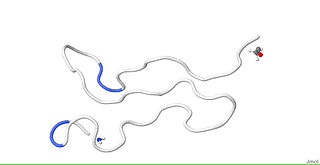 Cripto is an EGF-CFC or epidermal growth factor-CFC, which is encoded by the Cryptic family 1 gene. Cryptic family protein 1B is a protein that in humans is encoded by the CFC1B gene. Cryptic family protein 1B acts as a receptor for the TGF beta signaling pathway. It has been associated with the translation of an extracellular protein for this pathway. The extracellular protein which Cripto encodes plays a crucial role in the development of left and right division of symmetry.

Cerberus also known as CER1 is a protein that in humans is encoded by the CER1 gene. Cerberus is a signaling molecule which contributes to the formation of the head, heart and left and right asymmetry of internal organs. This gene varies slightly from species to species but its overall functions seem to be similar.

Levocardia is a medical condition where the heart is on the normal side of the body, as opposed to dextrocardia, in which the heart is in the right side of the thoracic cavity. This can be associated with situs solitus, where the remainder of the organs are on normal side as well; or situs inversus, in which the viscera on the opposite side as normal. The latter condition may or may not be associated with clinically relevant abnormalities. 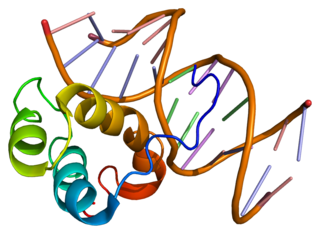 Paired-like homeodomain transcription factor 2 also known as pituitary homeobox 2 is a protein that in humans is encoded by the PITX2 gene.

Nodal is a secretory protein that in humans is encoded by the NODAL gene which is located on chromosome 10q22.1. It belongs to the transforming growth factor beta (TGF-β) superfamily. Like many other members of this superfamily it is involved in cell differentiation in early embryogenesis, playing a key role in signal transfer from the node, in the anterior primitive streak, to lateral plate mesoderm (LPM).

Situ or situs may refer to:

Symmetry breaking in biology is the process by which uniformity is broken, or the number of points to view invariance are reduced, to generate a more structured and improbable state. That is to say, symmetry breaking is the event where symmetry along a particular axis is lost to establish a polarity. Polarity is a measure for a biological system to distinguish poles along an axis. This measure is important because it is the first step to building complexity. For example, during organismal development, one of the first steps for the embryo is to distinguish its dorsal-ventral axis. The symmetry-breaking event that occurs here will determine which end of this axis will be the ventral side, and which end will be the dorsal side. Once this distinction is made, then all the structures that are located along this axis can develop at the proper location. As an example, during human development, the embryo needs to establish where is ‘back’ and where is ‘front’ before complex structures, such as the spine and lungs, can develop in the right location. This relationship between symmetry breaking and complexity was articulated by P.W. Anderson. He speculated that increasing levels of broken symmetry in many-body systems correlates with increasing complexity and functional specialization. In a biological perspective, the more complex an organism is, the higher number of symmetry-breaking events can be found. Without symmetry breaking, building complexity in organisms would be very difficult.

The nodal signaling pathway is a signal transduction pathway important in regional and cellular differentiation during embryonic development. 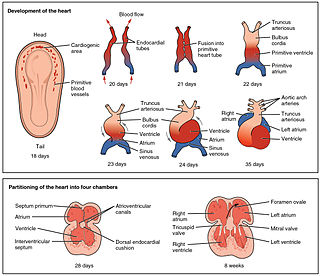 Heart development refers to the prenatal development of the heart. This begins with the formation of two endocardial tubes which merge to form the tubular heart, also called the primitive heart tube. The heart is the first functional organ in vertebrate embryos, and in the human, beats spontaneously by week 4 of development.

Left-right asymmetry refers to differences in structure across the mediolateral plane in animals. This plane is defined with respect to the anteroposterior and dorsoventral axes and is perpendicular to both. Because the left-right plane is not strictly an axis, to create asymmetry, the left and right sides need to be patterned separately.