In the Soviet Union, the system of House of Cultures was based on already existing Imperial Russian system of People's House that was established back in 1880s. It has several variations such as Palace of Arts, Palace of Sports, Palace of Pioneers, Palace of Metallurgists, House of the Red Army and others.

As an establishment for all kinds of recreational activities and hobbies: sports, collecting, arts, etc., the Palace of Culture was designed to have room for multiple uses. A typical Palace contained one or several cinema halls, concert hall(s), dance studios (folk dance, ballet, ballroom dance), various do-it-yourself hobby groups, amateur-radio groups, amateur-theatre studios, amateur musical studios and bands, lectoriums (lecture halls), and many more. Groups were also subdivided by age of participants, from children to retirees. A public library may sometimes have been housed in the Palace of Culture as well. All hobby groups were free of charge until most recent times, when many hobbies with less official recognition were housed based on "self-repayment". A Palace of Culture was sometimes called a "club", but this did not mean that it was membership-based.

In official rhetoric, all these were supposed to aid the "cultural leisure" of Soviet workers and children and to fight "cultureless leisure", such as drinking and hooliganism.

Palaces or Houses of Culture were introduced in the early days of the Soviet Union, inheriting the role that was earlier fulfilled by so-called "People's Houses". Below is an excerpt from John Dewey's Impressions of Soviet Russia and the revolutionary world (1929). [1]

The other impression I would record came from a non-official visit to a House of Popular Culture. Here was a fine new building in the factory quarter, surrounded by recreation grounds, provided with one large theater, four smaller assembly halls, fifty rooms for club meetings, recreation and games, headquarters for trade unions, costing two million dollars, frequented daily—or rather, nightly—by five thousand persons as a daily average. Built and controlled, perhaps, by the government? No, but by the voluntary efforts of the trade unions, who tax themselves two percent of their wages to afford their collective life these facilities. The House is staffed and managed by its own elected officers. The contrast with the comparative inactivity of our own working men and with the quasi-philanthropic quality of similar enterprises in my own country left a painful impression. It is true that this House—there is already another similar one in Leningrad—has no intrinsic and necessary connection with communistic theory and practice. The like of it might exist in any large modern industrial center. But there is the fact that the like of it does not exist in the other and more highly developed industrial centers. There it is in Leningrad, as it is not there in Chicago or New York...

Palaces of Culture served another important purpose: they housed local congresses and conferences of the regional divisions of the Communist Party, the Komsomol, etc.

In smaller rural settlements similar establishments of lesser scope were known as "clubs", with main activities there being dance nights and cinema.

In the People's Republic of China, the best-known, and most centrally located, Palace of Culture is perhaps the "Workers' Palace of Culture" located in the former Imperial Ancestral Temple just outside the Forbidden City in Beijing.

The concept and the name of a "House of Culture" also appears in (for example) France (Maison de la culture  [ fr ]), Belgium and Quebec.

Most Palaces of Culture continue to exist after the dissolution of the Soviet Union, but their status, especially the financial one, changed significantly, for various reasons. 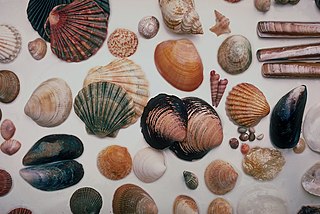 A hobby is considered to be a regular activity that is done for enjoyment, typically during one's leisure time. Hobbies include collecting themed items and objects, engaging in creative and artistic pursuits, playing sports, or pursuing other amusements. Participation in hobbies encourages acquiring substantial skills and knowledge in that area. A list of hobbies changes with renewed interests and developing fashions, making it diverse and lengthy. Hobbies tend to follow trends in society, for example stamp collecting was popular during the nineteenth and twentieth centuries as postal systems were the main means of communication, while video games are more popular nowadays following technological advances. The advancing production and technology of the nineteenth century provided workers with more leisure time to engage in hobbies. Because of this, the efforts of people investing in hobbies has increased with time.

The Palace of Culture and Science is a notable high-rise building in central Warsaw, Poland. With a total height of 237 metres (778 ft) it is the second tallest building in both Warsaw and Poland after Varso, the 6th-tallest building in the European Union and one of the tallest on the European continent. Constructed in 1955, it houses various public and cultural institutions such as cinemas, theatres, libraries, sports clubs, university faculties, and authorities of the Polish Academy of Sciences. Since 2007, it has been enlisted in the Registry of Objects of Cultural Heritage. 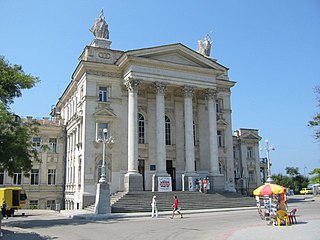 Constructivist architecture was a constructivist style of modern architecture that flourished in the Soviet Union in the 1920s and early 1930s. Abstract and austere, the movement aimed to reflect modern industrial society and urban space, while rejecting decorative stylization in favor of the industrial assemblage of materials. Designs combined advanced technology and engineering with an avowedly communist social purpose. Although it was divided into several competing factions, the movement produced many pioneering projects and finished buildings, before falling out of favour around 1932. It has left marked effects on later developments in architecture.

Palace of Sports or Sports Palace is a generic name of comprehensive indoors sports venues introduced in the Soviet Union of big size that includes various sports halls and auxiliary space. Primarily designated to host sports events in front of spectators.

Institute of Culture was an institution of vocational education established in the Soviet Union and still existing in some post-Soviet states, aimed at training of workers in various areas of culture and organization of leisure activities.

Oleg Leonidovich Lomakin was a Russian Soviet realist painter, Honored Artist of the RSFSR, who lived and worked in Saint Petersburg. He was regarded as one of the major representatives of the Leningrad school of painting.

Anna Alexandrovna Kostrova was a Russian Soviet realist painter, graphic artist, and book illustrator, who lived and worked in Leningrad. She was a member of the Leningrad Union of Artists, regarded as a representative of the Leningrad school of painting.

The year 1957 was marked by many events that left an imprint on the history of Soviet and Russian fine arts.

The Leningrad School of Painting is a phenomenon that refers to a large group of painters who developed in Leningrad around the reformed Academy of Arts in 1930–1950 and was united by the Leningrad Union of Soviet Artists (1932–1991).

The year 1923 was marked by many events that left an imprint on the history of Soviet and Russian Fine Arts.

The year 1924 was marked by many events that left an imprint on the history of Soviet and Russian Fine Arts.

The year 1931 was marked by many events that left an imprint on the history of Soviet and Russian Fine Arts.

The year 1933 was marked by many events that left an imprint on the history of Soviet and Russian Fine Arts.

Andrei Sergeevich Bantikov was a Russian and Soviet painter, a member of the Leningrad Union of Soviet Artists, who lived and worked in Saint Petersburg, regarded as one of representatives of the Leningrad School of Painting.

The fine art of Leningrad is an important component of Russian Soviet art—in the opinion of the art historians Vladimir Gusev and Vladimir Leniashin, "one of its most powerful currents". This widely used term embraces the creative lives and the achievements of several generations of Leningrad painters, sculptors, graphic artists and creators of decorative and applied art from 1917 to the early 1990s. 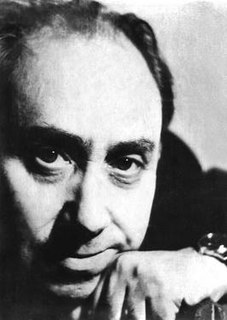 Matvey Grigor'evich Dubrovin. He is the founder of the Theater of Youth Creativity in Leningrad (1956). Honored Cultural Worker of the RSFSR. He developed the theory of integrated education of children through theatrical art. Matvey Dubrovin's method was based on education of a person through the use of theater.

A House of Officers, sometimes officially referred to as the Central House of Officers or Officer Houses, is a military and cultural institution originating in the Soviet Army and living on today in the Russian Armed Forces and the militaries of many Post-Soviet states. Being the Russian/Soviet equivalent to military officers' clubs in the United States, it effectively serves as cultural center serving to represent the military and to improve civil–military relations. It can be an independent formation in the national defence ministry or a public entity like a club-houses. In the early days of the Soviet Union the institution was called the House of the Red Army. The head of the building is a senior officer, usually with the rank of a Major or above.

Mify are a rock band formed in Leningrad in 1966.