Paternoster Row was a street in the City of London that was a centre of the London publishing trade, [1] [2] with booksellers operating from the street. [3] Paternoster Row was described as "almost synonymous" with the book trade. [4] It was part of an area called St Paul's Churchyard.

The street was devastated by aerial bombardment during the World War II. In 2003 the street was replaced with Paternoster Square, the modern home of the London Stock Exchange, although a City of London Corporation road sign remains in the square near where Paternoster Row once stood.[ citation needed ]

As far back as the 12th century, the road was known as Paternoster Row, as it was the main place in London where Paternoster beads were made by skilled craftsmen. The beads were popular with illiterate monks and friars at the time, who prayed 30 Paternoster prayers (Latin for "Our Father") three times a day as a substitute for the 150 psalms recited a day by literate monks. [5]

The street is supposed to have received its name from the fact that, when the monks and clergy of St Paul's Cathedral would go in procession chanting the great litany, they would recite the Lord's Prayer (Pater Noster being its opening line in Latin) in the litany along this part of the route. The prayers said at these processions may have also given the names to nearby Ave Maria Lane and Amen Corner.

An alternative etymology is the early traders, who sold a type of prayer bead known as a "pater noster".[ citation needed ]

The name of the street dates back at least to the 16th century.

Gentleman Henry (Robert) Gunnell, Esq. (1724–1794) of Millbank, a senior officer in the House of Commons and House of Lords who worked the Tax Acts for the American Colonies with Prime Minister George Grenville and also Lord North, bought No.8 Paternoster Row in 1778 as one of his portfolio of properties and soon after gave it to his eldest son John Gunnell (1750–1796), a Westminster gentleman. John though seldom stayed at the house, as he lived mainly at Margate, Kent, and it was instead used as a literary venue by his father Henry (Robert) and his friends, where among other notable members, Jane Timbury would attend. Her stance as a novelist and poet later inspired Jane Austen in her career. Henry (Robert) Gunnell's wife Anne Rozea (1727–1795) of Duke's Court, St. Martin's Lane (situated where now the National Gallery cafe is positioned) was known for her attendance, reciting moving French poetry dressed in an exquisite mantua with ornate jubilee hat. Johann Christian Bach (1735–1782) and Sir Joshua Reynolds (1723-1792) were also known to have attended on occasions. Henry (Robert) had bought No.8 Paternoster Row from Philanthropist Sylvanus Hall, a successful London currier and leather goods craftsman (Guildhall Library) and also governor of both St. Thomas and Bridewell Hospitals, who owned two other houses on Paternoster Row and had earlier worked with Anne Rozea at "Gunnell's Hat Warehouse" at No.54 Chandois Street (next door to the Mercers Coventry Cross), Covent Garden, from the mid 1760s. There he oversaw the manufacture of fashionable hats, cloaks and silk garments and later married Henry (Robert) Gunnell and Anne Rozea's daughter, Ann Gunnell (1746–1804), at the church of St.Augustine, Watling Street, 2 February 1769 just east of St. Paul's cathedral. They lived at No.8 Paternoster Row for nine years, until her father bought it for his son John as part of his inheritance as mentioned in 1778. Ann and Sylvanus Hall then moved to a house on Golden Square, Soho. On 21 February 1776, at the Old Bailey, Jeremiah Pope was indicted for stealing 'six hundred pounds weight of lead piping' from the three properties (Nos. 8, 9, and 10) of Sylvanus Hall on Paternoster Row. Another well-known visitor to No.8 was Thomas Vanhagen, whose famous pastry shop was located beside Pauls Alley, St. Paul's Churchyard, facing the North Entrance and where many Londoners took their refreshment. Various caricatures of Vanhagen (British Museum) were published over the years. His daughter Charlotte married Henry (Robert) and Anne's son Henry Gunnell (1754–1823), also of the House of Commons, 10 July 1779 at the parish of St. Gregory by St. Paul's. The Gunnells eventually sold No.8 Paternoster Row in 1794.[ citation needed ]

A bust of Aldus Manutius, writer and publisher, can be seen above the fascia of number 13. [6] The bust was placed there in 1820 by Bible publisher Samuel Bagster. [7]

It was reported that Charlotte Brontë and Anne Brontë stayed at the Chapter Coffeehouse on the street when visiting London in 1847. They were in the city to meet their publisher regarding Jane Eyre . [8]

A fire broke out at number 20 Paternoster Row on 6 February 1890. Occupied by music publisher Fredrick Pitman, the first floor was found to be on fire by a police officer at 21:30. The fire alarm was sounded at St. Martin's-le-Grand and fire crews extinguished the flames in half an hour. The floor was badly damaged, with smoke, heat and water impacting the rest of the building. [9]

This blaze was followed later the same year on 5 October by 'an alarming fire'. At 00:30 a fire was discovered at W. Hawtin and Sons, based in numbers 24 and 25. The wholesale stationers' warehouse was badly damaged by the blaze. [10]

On 21 November 1894, police raided an alleged gambling club which was based on the first floor of 59 Paternoster Row. The club known both as the 'City Billiard Club' and the 'Junior Gresham Club' had been there barely three weeks at the time of the raid. Forty-five arrests were made, including club owner Albert Cohen. [11]

On 4 November 1939, a large-scale civil defence exercise was held in the City of London. One of the simulated seats of fire was in Paternoster Row. [12]

Trübner & Co. was one of the publishing companies on Paternoster Row.

The street was devastated by aerial bombardment during the Blitz of World War II, suffering particularly heavy damage in the night raid of 29–30 December 1940, later characterised as the Second Great Fire of London, during which an estimated 5 million books were lost in the fires caused by tens of thousands of incendiary bombs. [13]

After the raid a letter was written to The Times describing:

'...a passage leading through "Simpkins" [which] has a mantle of stone which has survived the melancholy ruins around it. On this stone is the Latin inscription that seems to embody all that we are fighting for :- VERBUM DOMINI MANET IN AETERNUM' [The word of God remains forever]. [14]

Another correspondent with the newspaper, Ernest W. Larby, described his experience of 25 years working on Paternoster Row: [15]

…had he [Lord Quickswood] worked for 25 years, as I did, in Paternoster Row, he would not have quite so much enthusiasm for those narrow ways into whose buildings the sun never penetrated… What these dirty, narrow ways of the greatest city in the world really stood for from the people's viewpoint are things we had better bury.

The ruins of Paternoster Row were visited by Wendell Willkie in January 1941. He said, "I thought that the burning of Paternoster Row, the street where the books are published, was rather symbolic. They [the Germans] have destroyed the place where the truth is told". [16]

Printers, publishers and booksellers based in Paternoster Row

Note: Before about 1762, premises in London had signs rather than numbers.

Others based in Paternoster Row

The Royal Exchange in London was founded in the 16th century by the merchant Sir Thomas Gresham on the suggestion of his factor Richard Clough to act as a centre of commerce for the City of London. The site was provided by the City of London Corporation and the Worshipful Company of Mercers, who still jointly own the freehold. It is trapezoidal in shape and is flanked by Cornhill and Threadneedle Street, which converge at Bank junction in the heart of the city. It lies in the ward of Cornhill. 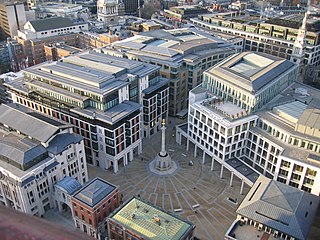 Paternoster Square is an urban development, owned by the Mitsubishi Estate Co., next to St Paul's Cathedral in the City of London. The area, which takes its name from Paternoster Row, once centre of the London publishing trade, was devastated by aerial bombardment in The Blitz during the Second World War. It is now the location of the London Stock Exchange which relocated there from Threadneedle Street in 2004. It is also the location of investment banks such as Goldman Sachs, Merrill Lynch and Nomura Securities Co., and of fund manager Fidelity Investments. The square itself, i.e. the plaza, is privately owned public space. In 2004, Christopher Wren's 1669 Temple Bar Gate was re-erected here as an entrance way to the plaza. 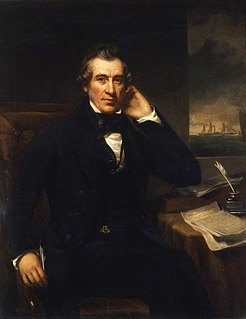 Adam Clarke was a British Methodist theologian who served three times as President of the Wesleyan Methodist Conference. A biblical scholar, he published an influential Bible commentary among other works. He was a Wesleyan.

Henry Colburn was a British publisher. 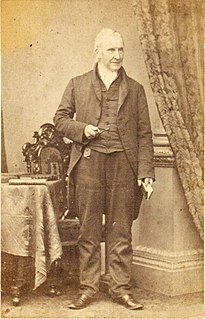 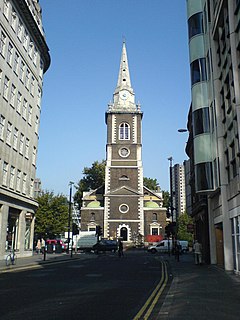 St Botolph's Aldgate is a Church of England parish church in the City of London and also, as it lies outside the line of the city's former eastern walls, a part of the East End of London.

St Peter, Vere Street, known until 1832 as the Oxford Chapel after its founder Edward Harley, 2nd Earl of Oxford and Earl Mortimer, is a former Anglican church off Oxford Street, London. It has sometimes been referred to as the Marybone Chapel or Marylebone Chapel. 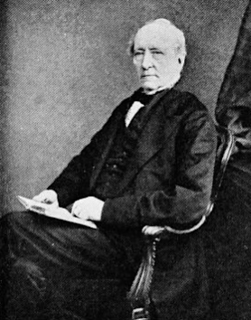 Sampson Low was a bookseller and publisher in London in the 19th century. 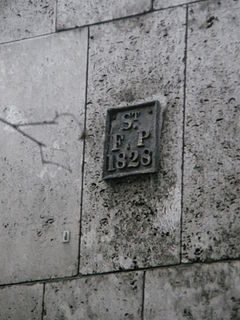 St Faith under St Paul's in Castle Baynard Ward was an unusual parish within the City of London. It originally had its own building to the east of St Paul's Cathedral, serving as a parish church for the residents of St Paul's Churchyard and Paternoster Row, but this was removed in 1256 to allow for the eastern expansion of the Cathedral. The parishioners were instead given a space to worship within the cathedral crypt.

Baron Eure was a title in the Peerage of England. It was granted to Sir William Eure by Henry VIII in 1544. The Baron was thereafter called Lord Eure. The title became extinct with the death of Ralph Eure in 1690. The family name is also spelt Evres, Ewer, and Evers.

Rev. Canon Henry Twells (1823–1900) was an Anglican clergyman, hymn writer and poet. His best known hymn was "At Even, Ere the Sun Was Set", which was put to music by George Joseph, whose tune Angelus was first printed in 1657. He also wrote the well-known poem, "Time's Paces" that depicts the apparent speeding up of time as we become older. A younger brother, Edward Twells, was the first Bishop of Bloemfontein.

The Artists' Benevolent Fund was instituted in 1810 and incorporated by royal charter on 2 August 1827. It has also been referred to as the Artists' Fund and the Artists' Joint Stock Fund.