Patriot Started out as Liberty Christian. It eventually changed into Liberty Preparatory before officially becoming Patriot Preparatory Academy. The school was founded by David McIlrath.

Patriot Preparatory participates in athletics under the authority of the Ohio High School Athletic Association. 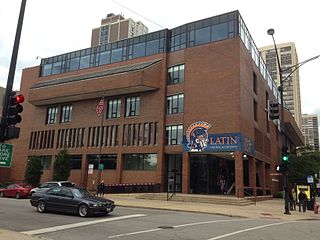 Latin School of Chicago is a selective private elementary, middle, and high school located in the Gold Coast neighborhood on the Near North Side of Chicago, Illinois, United States. The school was founded in 1888 by Mabel Slade Vickery. Latin School is a member of the Independent School League (ISL).

The Pennington School is a private (independent), coeducational college preparatory school for day and boarding students in sixth through twelfth grades, located in Pennington, New Jersey, a small community in the northeastern United States midway between New York City and Philadelphia in Mercer County, New Jersey. The Head of School is Dr. William S. Hawkey, who assumed the position in July 2014.

Liberty High School (LHS) is a four-year public high school in Eldersburg in Carroll County, Maryland, United States at 5855 Bartholow Road. The principal of the school is Kenneth Goncz. 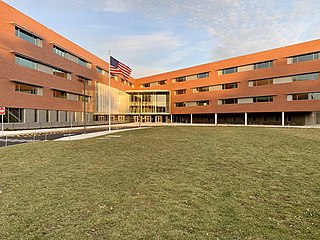 Belmont High School is a four-year public high school in Belmont, Massachusetts, United States. The new school building was opened in 2021. The school had 1,309 students enrolled and a student/teacher ratio of 16.8:1 in the 2020–2021 school year. The second part of the building, which is the Belmont Junior High, is currently still under construction.

Quaker Valley High School is a high school located in Leetsdale, Pennsylvania. The school is one of the four National Blue Ribbon Schools that comprise the Quaker Valley School District. The school teaches an average of 645 students in grades 9 through 12, and offers a college-preparatory core curriculum with elective courses. 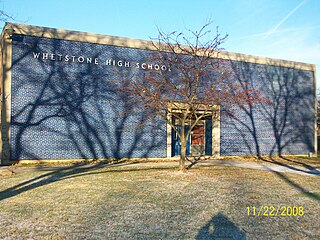 Whetstone High School is a public high school located at 4405 Scenic Drive in Columbus, Ohio. It is a part of Columbus City Schools and the neighborhood of Clintonville. Whetstone's mascot is the Brave. The school opened in 1961 to accommodate the overflow from North High School. The expanding student base brought on by growth in north Columbus created the need for an additional school.

Long Island Lutheran Middle and High School is a Christian college preparatory school in Brookville, New York, United States. It was founded and built in 1960 on a 32-acre (13 ha) estate and has a student body of approximately 450 students in grades 6-12, with students coming from more than 50 school districts throughout Long Island and New York City. The school is accredited by the New York State Association of Independent Schools.

Trinity High School is a private coeducational Roman Catholic college preparatory High School, located in Garfield Heights, Ohio, United States. It is located in the Roman Catholic Diocese of Cleveland. It was started in 1926 by the Sisters of St. Joseph of the Third Order of St. Francis.

The Morris County School of Technology is a vocational magnet public high school located in Denville Township, in Morris County, United States, operating as part of the Morris County Vocational School District. This school prepares high school students for future careers, through its academy programs, each focusing on a particular trade as well as an advanced college preparatory program. Students apply to one of the 13 different academies in a process that starts the 8th grade year of local students. The highly competitive process begins with a general admissions test and is followed by group interviews on an academy basis. The school has an overall acceptance rate of 30%.

East Chicago Central High School or commonly known as Central or ECCentral, is a public high school in the industrial City of East Chicago, located east of the Chicago metropolitan area. 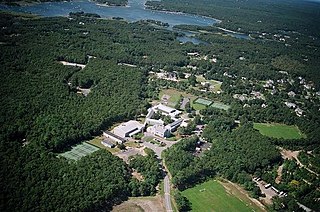 Ogdensburg Free Academy is a public high school in Ogdensburg, New York. It consists of around 750 or more students in the 7th through 12th grade. The famous Golden Dome is located on State Street and attracts residents from across the North Country. Every year, the Ogdensburg Boys & Girls Clubs of America hosts an 'Expo' where local businesses can get the most advertisement. There are also performances in the Golden Dome.

Eastside Preparatory School is an independent school for upper and middle school students. It is located in Kirkland, Washington, US. It is a secular, coed, college-preparatory school for grades 5–12. The Head of School is Dr. Terry Macaluso.