The Philadelphia Bell was a franchise in the World Football League, which operated in 1974 and a portion of a season in 1975. The Bell played their home games in 1974 at JFK Stadium in South Philadelphia. The team logo was a representation of the Liberty Bell. In 1975 the team decided to stop playing at JFK and moved its games to Franklin Field. [1]

The Bell was one of just two WFL teams that maintained the same ownership in both 1974 and 1975 (the other being Canadian millionaire John Bassett's Memphis Southmen). The group was headed by John B. Kelly Jr., a respected business and sportsman in Philadelphia and part of the well-known Kelly family, which included his sister Grace Kelly, movie star-turned-Princess of Monaco. The major money contributor behind the ownership group was John Bosacco, who came forward during the first season and took over the operations of the franchise. Bosacco believed that the WFL could survive and was instrumental in the removal of Gary Davidson as commissioner following the 1974 season.

Led by head coach Ron Waller, the Bell appeared to be the most popular team in the fledgling league, announcing a crowd of 55,534 for the home opener, followed by a whopping 64,719 for the second home game (for comparison's sake, the NFL Eagles averaged 60,030 fans for seven home dates that year).

However, when the Bell paid city taxes on the attendance figures two weeks later, it emerged that they had inflated the gate on a scale unprecedented in professional sports. In an apparent attempt to pique interest, the Bell sold block tickets to several area businesses at a discount, and did not report the tax revenue. In turn, many of these businesses gave away the tickets for free. The actual paid attendance for the home opener was only 13,855, and for the second game just 6,200—and many of those tickets were sold well below face value. The "Papergate" scandal, as it was dubbed by the press, made the Bell and the WFL look foolish, and proved to be a humiliation from which neither recovered. Attendance continued to drop, as Philadelphia drew only 62,126 fans (less than the supposed crowd for their second home game) for their last seven home games combined, or less than 9,000 per contest. The club hit rock bottom on October 16, when only 750 fans found their way to JFK for a Wednesday night game in a torrential downpour.

On the field, the Bell were mediocre. They were led by flashy quarterback King Corcoran, who had spent most of his career in the minor leagues due to his refusal to accept a backup QB slot (Corcoran had even played under Coach Waller with the Pottstown Firebirds of the recently closed Atlantic Coast Football League). Philadelphia managed only a 9–11 mark in 1974, one game behind the Charlotte Hornets for the final playoff spot. (The Bell were actually 8–11 on the field, but were awarded a win by forfeit when the dissolving Chicago Fire refused to fly to Philadelphia for the season finale.) However, at the request of WFL officials, they advanced to the playoffs anyway in place of Charlotte; the Florida Blazers could sell only 1,000 advance tickets for the first round matchup in Orlando, nowhere near enough for the financially troubled Hornets (who had moved from New York City in mid-season) to meet their travel expenses. The Bell, in contrast, were somewhat better financed, and could cover their own expenses. They traveled to Orlando, where lost to the Blazers, 18-3, in front of less than 10,000 fans.

Despite the Papergate fiasco, the Bell were reckoned as one of the WFL's stronger franchises and at least had the potential to have been successful had the league been better run. Bosacco was one of only three owners, along with the Memphis Southmen's John F. Bassett and The Hawaiians' Sam Battisone, thought to be capable of fielding a team in 1975; those three teams had been the only ones to meet payroll every week of the 1974 season. [3]

As the 1975 season got underway, Coach Waller was replaced during training camp at Glassboro State University by future NFL Hall of Famer Willie Wood, [4] making him the first African-American head coach of a modern pro football team.

Even on TV, the Bell couldn't get any respect. On August 29, 1975, WTAF aired a sports doubleheader, featuring a Philadelphia Wings lacrosse match followed by the Bell's game against the Southern California Sun in Anaheim. The football game was scheduled for 10:30 pm EDT, but since the Wings game ran long, viewers missed the beginning. Bell fans would miss the end of the contest, too: WTAF abruptly cut the broadcast off with six minutes remaining in the fourth quarter, pleading a "prior commitment". The station then signed off for the night at 1:30 am; the game (won by the Sun, 58-39) didn't end until 2:06 am. (According to a Philadelphia Daily News story, "keeping the final six minutes of the game on TV could have cost the Bell an estimated $5,000 in telephone line charges," so the broadcast, which the club was evidently paying for, was cut off at the three-hour mark.) [5]

The Bell had a record of 4–7 in 1975 at the time of the league's dissolution. Attendance remained anemic, with the team's best-attended game at Franklin Field drawing barely 5,000 fans. After only 1,293 fans attended the Bell's October 18 contest, both the team and the WFL folded for good.

Vince Papale, the inspiration for the 2006 film Invincible , played wide receiver for the Bell for two seasons prior to his three years with the Philadelphia Eagles. [6] [7] Both Papale and King Corcoran had recently played in the Seaboard Football League, the minor league that was active at the time in the area. 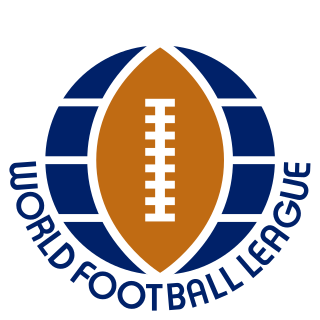 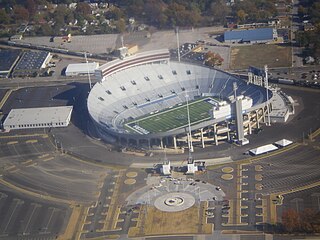 Liberty Bowl Memorial Stadium, originally named Memphis Memorial Stadium, is a football stadium located at the former Mid-South Fairgrounds in the Midtown area of Memphis, Tennessee, United States. The stadium is the site of the annual Liberty Bowl, and is the home field of the University of Memphis Tigers football team of the American Athletic Conference. It has also been the host of several attempts at professional sports in the city, as well as other local football games and other gatherings.

The Memphis Southmen, also known as the Memphis Grizzlies, were an American football team based in Memphis, Tennessee. They played in the World Football League (WFL), which operated in 1974 and 1975. They played their home games at Liberty Bowl Memorial Stadium.

The Charlotte Hornets were an American football team in the short-lived professional World Football League. Despite their brief existence, the Hornets were North Carolina's first attempt at a major league football team, predating the Carolina Panthers by two decades. They were relocated to Charlotte, North Carolina, from New York City in the middle of the 1974 season.

The Jacksonville Sharks were a professional American football team based in Jacksonville, Florida which competed in the World Football League in 1974. The Sharks folded during the 1974 season due to financial difficulties, and were succeeded by the Jacksonville Express which also folded when the league ceased operations during the 1975 season.

The Birmingham Americans were a professional American football team located in Birmingham, Alabama. They were members of the four-team Central Division of the World Football League (WFL). The Americans, founded in late December 1973, played in the upstart league's inaugural season in 1974. The team was owned by William "Bill" Putnam, doing business as Alabama Football, Inc.

The Shreveport Steamer were a professional American football team in the World Football League. The franchise began the 1974 season in Houston, Texas, as the Houston Texans, playing their home games at the Houston Astrodome. Toward the end of the season, the team relocated to Shreveport, Louisiana, and became the Shreveport Steamer. They played at the 30,000-seat State Fair Stadium, now named Independence Stadium. Larry King, of future CNN fame, was one of their broadcasters.

John F. Kennedy Stadium was an open-air stadium in Philadelphia that stood from 1926 to 1992. The South Philadelphia stadium was on the east side of the far southern end of Broad Street at a location now part of the South Philadelphia Sports Complex. Designed by the architectural firm of Simon & Simon in a classic 1920s style with a horseshoe seating design that surrounded a track and football field, at its peak the facility seated in excess of 102,000 people. Bleachers were later added at the open (North) end.

The Chicago Fire was an American football team in the short-lived World Football League for one season, 1974.

The Chicago Winds was the World Football League's ill-fated 1975 successor to the Chicago Fire. The team was so named because Chicago was nicknamed "The Windy City." The Winds played at Soldier Field and the team was assigned to the WFL's Western Division for 1975.

The Florida Blazers were an American football team who played in the World Football League in 1974. The team moved to San Antonio in 1975 and became the San Antonio Wings.

The Detroit Wheels were an American football team, a charter member of the World Football League.

The Hawaiians were a professional American football team based in Honolulu that played in the World Football League. They played two seasons, 1974 and 1975. Their records were 9–11 in 1974 and 4–7–1 in 1975. Their home stadium was Honolulu Stadium in 1974 and Aloha Stadium in 1975. The best known player to play for the Hawaiians was former Dallas Cowboys running back Calvin Hill, though quarterback Jim Fassel became better known as a head coach decades later. The Hawaiians head coach was Michael Giddings who guided the Hawaiians through both the 1974 and 1975 World Football League seasons.

The Portland Thunder was an American football team in the World Football League based out of Portland, Oregon. When the World Football League was created in October 1973, the Storm was the original New York franchise. When the Boston Bulls merged with New York to become the New York Stars, the original New York entry's draft picks were eventually relegated to Portland. They were the first major league football team based in Portland. They played at Civic Stadium, now known as Providence Park.

Invincible is a 2006 American sports drama film directed by Ericson Core. It is based on the true story of Vince Papale, who played for the Philadelphia Eagles from 1976 to 1978 with the help of his coach, Dick Vermeil. The film was released in the United States on August 25, 2006.

James Sean Patrick "King" Corcoran was an American football quarterback in the Atlantic Coast Football League, Seaboard Football League, World Football League, and briefly in the American Football League. Corcoran played college football, mostly as a back-up, for the Maryland Terrapins. He gained notoriety for his flamboyant dress and playboy lifestyle, which earned him the reputation of being a "poor man's Joe Namath".

The Seaboard Football League was a minor American football league that operated from 1971 to 1974. It folded during the 1974 season as a result of the founding of the World Football League, which deprived the league of talent.