It is a major cruise ship terminal, and several cruise operators operate on Pier 35, notably Princess Cruises whose ships Star Princess , Sapphire Princess , and Sea Princess stop at the pier throughout the year. It contains a small lobby with a large archway at the front, where passengers entering from the Embarcadero go through security checks. [2] On New Year's Eve 2009, a stabbing incident took place on the pier. [3]

The pier was rebuilt by the State Board of Harbor Commissioners and dedicated as the new San Francisco terminal for the Grace Line on October 19, 1933. Santa Lucia, one of the lines large new liners, was present and the fist of the big new intercoastal liners to use the pier. The rebuilt pier was designed to expedite cargo and passenger passage from ship to destination. Large, comfortable rooms were located on the elevated gallery for passengers and friends for boarding and debarking. The manager for Grace in San Francisco estimated the new facility would handle 12,000 passengers, 60,000 visitors and 300,000 tons of cargo during the next year. [4] 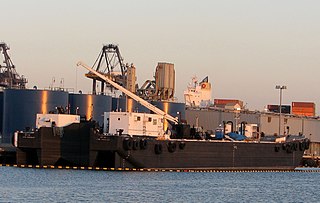 The Port of Los Angeles, also promoted as "America's Port", is a seaport managed by the Los Angeles Harbor Department, a unit of the City of Los Angeles. It occupies 7,500 acres (3,000 ha) of land and water along 43 mi (69 km) of waterfront and adjoins the separate Port of Long Beach. The port is located in San Pedro Bay in the San Pedro and Wilmington neighborhoods of Los Angeles, approximately 20 miles (32 km) south of downtown.

The Port of Liverpool is the enclosed 7.5 miles (12.1 km) dock system that runs from Brunswick Dock in Liverpool to Seaforth Dock, Seaforth, on the east side of the River Mersey and the Birkenhead Docks between Birkenhead and Wallasey on the west side of the river. The port was extended in 2016 by the building of an in-river container terminal at Seaforth Dock, named Liverpool2. The terminal can berth two 14,000 container Post-Panamax ships.

Pier 21 was an ocean liner terminal and immigration shed from 1928 to 1971 in Halifax, Nova Scotia, Canada. Nearly one million immigrants came to Canada through Pier 21, and it is the last surviving seaport immigration facility in Canada. The facility is often compared to the landmark American immigration gateway Ellis Island. The former immigration facility is now occupied by the Canadian Museum of Immigration, the Nova Scotia College of Art and Design as well as various retail and studio tenants.

The Port of San Juan is a seaport facility located in the metropolitan area of San Juan, Puerto Rico. 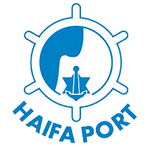 The Port of Haifa is the largest of Israel's three major international seaports, the others being the Port of Ashdod, and the Port of Eilat. It has a natural deep-water harbor, which operates all year long, and serves both passenger and merchant ships. It is one of the largest ports in the eastern Mediterranean in terms of freight volume and handles about 30 million tons of cargo per year. The port employs over 1,000 people, rising to 5,000 when cruise ships dock in Haifa. The Port of Haifa lies to the north of Haifa's downtown quarter on the Mediterranean, and stretches to some three kilometres along the city's central shore with activities ranging from military, industrial and commercial next to a nowadays-smaller passenger cruising facility.

SS Manhattan was a 24,189 GRT luxury ocean liner of the United States Lines, named after the Manhattan borough of New York City. On 15 June 1941 she was commissioned as USS Wakefield and became the largest ship ever operated by the US Coast Guard. In 1942 she caught fire and was rebuilt as a troop ship. Manhattan never saw commercial service again.

Ogden Point is a deep water port facility located in the southwestern corner of the city of Victoria, British Columbia, Canada. Its advantageous geographic location on the southern tip of Vancouver Island, by the Strait of Juan de Fuca, close to major population centres Vancouver and Seattle, has made it an attractive cruise ship destination. It also serves as a ship repair and supply facility for cruise ships and other vessels such as deep sea cable laying ships. Ogden Point also has a heliport with frequent service to Vancouver Harbour, Vancouver International Airport, and Seattle. The port lies at the eastern entrance of Victoria Harbour. For smaller boats there is boat ramp for trailerable boats.

RMS Sylvania was an ocean liner built in 1957 by John Brown & Co (Clydebank), in Glasgow, for the United Kingdom-based shipping company Cunard Line. She was the last Cunard Line vessel built specifically for transatlantic crossings. The ship was later heavily rebuilt as a cruise ship, and sailed under the names SS Fairwind, SS Sitmar Fairwind, SS Dawn Princess and SS Albatros before being scrapped in 2004. She was renamed SS Genoa for her last voyage.

USS Leedstown (AP-73), built as the Grace Line passenger and cargo ocean liner SS Santa Lucia, served as a United States Navy amphibious assault ship in World War II. The ship had first been turned over to the War Shipping Administration (WSA) and operated by Grace Line as the WSA agent from February to August 1942 in the Pacific. In August the ship, at New York, was turned over to the Navy under sub-bareboat charter from WSA. She was sunk 9 November 1942 off the Algerian coast by a German submarine after German bombers caused damage the day before. 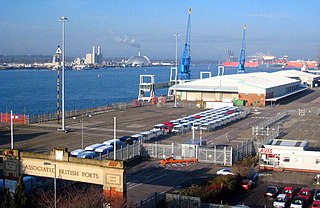 The Port of Southampton is a passenger and cargo port in the central part of the south coast of England. The modern era in the history of the Port of Southampton began when the first dock was inaugurated in 1843. The port has been owned and operated by Associated British Ports since 1982, and is the busiest cruise terminal and second largest container port in the UK.

The Liverpool Cruise Terminal is a 350-metre-long (1,150 ft) floating structure situated on the River Mersey enabling large cruise ships to visit without entering the enclosed dock system or berthing mid-river and tendering passengers ashore. The terminal was officially opened on 21 September 2007 by the Duke of Kent when the Queen Elizabeth 2 berthed at the terminal. The current terminal is composed mainly of a floating landing stage, with a small passenger terminal building, but a larger terminal is under construction. The Terminal is run and operated by Cruise Liverpool, the department within Culture Liverpool at Liverpool City Council.

The Port of Istanbul is a passenger terminal for cruise liners, which is situated at Karaköy neighborhood of Beyoğlu district in Istanbul, Turkey. It consists of two adjoining piers, the Galata Pier and the Salıpazarı Pier, extending from the Galata Bridge on the Golden Horn to Salıpazarı on the west coast of the Bosporus. It is owned and operated by the state-owned Turkish Maritime Lines (TDİ).

SS Santa Paula was a passenger and cargo ocean liner built for the Grace Line. She was the second of four sister ships ordered in 1930 from the Federal Shipbuilding and Drydock Company of Kearny, NJ. Her regular service route included inter-coastal service between the east coast and the west coast of the USA via the Caribbean and the Panama Canal. She later sailed on cruises from New York to the Caribbean and South America. She was the second of three vessels to bear the name Santa Paula for Grace Line service.