The pygidium (plural pygidia) is the posterior body part or shield of crustaceans and some other arthropods, such as insects and the extinct trilobites. In groups other than insects, it contains the anus and, in females, the ovipositor. It is composed of fused body segments, sometimes with a tail, and separated from thoracic segments by an articulation. [1]

In arachnids, the pygidium is formed by reduction of the last three opisthosomal segments to rings where there is no distinction between tergites and sternites. A pygidium is present in Palpigradi, Amblypygi, Thelyphonida, Schizomida, Ricinulei and in the extinct order Trigonotarbida. It is also present in early fossil representatives of horseshoe crabs. 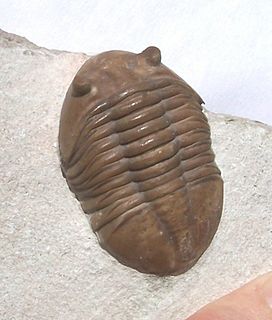 Lichida is an order of typically spiny trilobite that lived from the Furongian to the Devonian period. These trilobites usually have 8–13 thoracic segments. Their exoskeletons often have a grainy texture or have wart or spine-like tubercles. Some species are extraordinarily spiny, having spiny thoracic segments that are as long or longer than the entire body, from cephalon (head) to pygidium (tail). The sections of the pygidia are leaf-like in shape and also typically end in spines.

Cephalon, Inc. was a U.S. biopharmaceutical company co-founded in 1987 by Frank Baldino, Jr, pharmacologist, Michael Lewis, neuroscientist and James C. Kauer, organic chemist, all three former scientists with the DuPont Company. Baldino served as the company's chairman and chief executive officer until his death in December 2010. The company's name comes from the adjective "cephalic" meaning "related to the head or brain", and it was established primarily to pursue treatments for neurodegenerative diseases.

In insects, the pygidium is the dorsal tergite of the last external abdominal segment. [3]

Pygidium is also a superseded genus of fish of the family Trichomycteridae. Most species of this genus have been reassigned to the genus Trichomycterus . 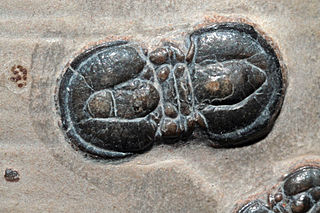 Naraoiidae is a family, of extinct, soft-shelled trilobite-like arthropods, that belongs to the order Nectaspida. Species included in the Naraoiidae are known from the second half of the Lower Cambrian to the end of the Upper Silurian. The total number of collection sites is limited and distributed over a vast period of time: Maotianshan Shale and Balang Formation (China), Burgess Shale and Bertie Formation (Canada), the Šárka Formation, Emu Bay Shale (Australia), Idaho and Utah (USA). This is probably due to the rare occurrence of the right circumstances for soft tissue preservation, needed for these non-calcified exoskeletons.

Corynexochida is an order of trilobite that lived from the Lower Cambrian to the Late Devonian. Like many of the other trilobite orders, Corynexochida contains many species with widespread characteristics.

Naraoia is a genus of small to average size marine arthropods within the family Naraoiidae, that lived from the early Cambrian to the late Silurian period. The species are characterized by a large alimentary system and sideways oriented antennas.

Misszhouia is a genus of small to average sized marine arthropods within the Naraoiidae family, that lived during the early Cambrian period. The only species presently known is Misszhouia longicaudata.

Emucaris fava is an extinct species of soft-shelled trilobite-like arthropod of the nektaspid order from the Lower Cambrian of South Australia. It is the only species classified under the genus Emucaris.

Kangacaris is an extinct genus of soft-shelled trilobite-like arthropod of the nektaspid order from the Lower Cambrian (Botomian). K. zhangi is known from South Australia, and K. shui from South-West China.

Tariccoia is a genus of small to average size marine arthropods in the Liwiidae Family, that lived during the late Ordovician period. Fossil remains of Tariccoia were collected from Sardinia, Italy. Tariccoia looks like a large, soft agnostid trilobite. It has a headshield wider than the tailshield (pygidium), and in between them three thoracic body segments (somites). The genus is monotypic, its sole species being Tariccoia arrusensis. 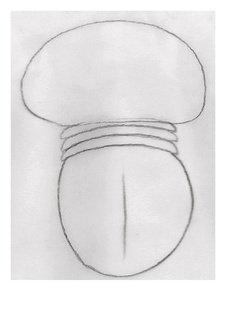 Soomaspis is a genus of small to average size marine arthropods in the Liwiidae Family, that lived during the late Ordovician. Fossil remains of Soomaspis were collected from the Soom Shale Lagerstätte in Western Cape, South Africa. Soomaspis looks like a large, soft agnostid trilobite. It has a headshield wider than the tailshield (pygidium), and in between them three thoracic body segments (somites). The genus is monotypic, its sole species being Soomaspis splendida. 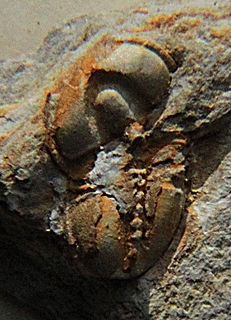 Eodiscina is a suborder of trilobite arthropods. The Eodiscina first developed near the end of the Lower Cambrian period and became extinct at the end of the Middle Cambrian. Species are tiny to small, and have a thorax of two or three segments. Eodiscina includes six families classified under one superfamily, Eodiscoidea.

Agnostotes orientalis is a species of agnostid trilobite belonging to the genus Agnostotes. It existed during the Jiangshanian Age of the Cambrian. It is an important index fossil in biostratigraphy.

Sphaeragnostus is an extinct genus from a well-known class of fossil marine arthropods, the trilobites. It can be recognized by having two thorax segments, a totally effaced headshield, while the tailshield although effaced, has a clear furrow parallel to its border, and a short, convex, subcircular axis. It lived during the Ordovician. 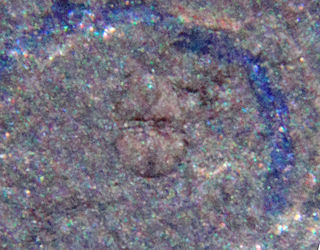 Thoracocare is a minute to very small trilobite, that lived during part of the Middle Cambrian in what are today the states of Idaho, Nevada and Utah. It is the only trilobite known with just two thorax segments outside most members of the Agnostida order. It can be distinguished from Agnostida by the very wide subquadrate glabella, parallel-side or widening forward in the largest specimen, with the full front side touching the border. Two species are known, one, T. idahoensis, only from pygidia.