Ra is one of the fourteen provinces of Fiji. Occupying the northern area of Viti Levu, the largest island, it is one of eight Viti Levu-based Provinces. With a land area of 1341 square kilometers, it had a population of 30,432 at the 2017 census. [1] The main urban centre is at Vaileka, with a population of 3,361 in 1996.

Ra is governed by a Provincial Council, currently chaired by Mr Simione Naikarua who was a former Board Secretary of Airport Fiji Limited and former Chief Executive Officer of the Nasinu Town Council. Mr Simione Naikarua hails from Burenitu village in the district of Nalawa in Ra.

There was an attempt in 2015 to create a "Christian state" in Ra. This was described by the then Chief of Police, Ben Groenewald, as a harmless cult, but the prime minister Frank Bainimarama took a sterner view and ordered a clamp-down by the army.

It was due to claims by the “cult” that the constitution of Fiji violated the UN Indigenous People's Rights. But in order to ask for the UN's help, it had to be from a nation, hence The Ra Christian State was born to contest the constitution. Many of the conspirators have been put in jail for Sedition and Treason. [3]

The Ra dialect of Fijian is distinctive in that the consonant /t/, pronounced elsewhere in Fiji, is pronounced as a glottal stop.

Ratu is an Austronesian title used by male Fijians of chiefly rank. An equivalent title, Adi, is used by females of chiefly rank. In the Malay language, the title Ratu is also the traditional honorific title to refer to the ruling king or queen in Javanese culture. Thus in Java, a royal palace is called "keraton", constructed from the circumfix ke- -an and Ratu, to describe the residence of the Ratu.

The culture of Fiji is a tapestry of native Fijian, Indian, European, Chinese, and other nationalities. Culture polity traditions, language, food costume, belief system, architecture, arts, craft, music, dance, and sports will be discussed in this article to give you an indication of Fiji's indigenous community but also the various communities which make up Fiji as a modern culture and living. The indigenous culture is an active and living part of everyday life for the majority of the population.

Turaga na Vunivalu na Tui Kaba is the Paramount Chief of the Kubuna Confederacy, loosely translated the title means Warlord of Bau or Root of War. The succession to the title does not follow primogeniture, but the candidate must be a high-ranking member of the Tui Kaba clan.

The Western Division of Fiji is one of Fiji's four divisions. It consists of three provinces in western/northern Viti Levu, namely Ba, Nadroga-Navosa and Ra. The largest city is Lautoka.

Ratu Meli Bolobolo was a Fijian chief and academic, who lectured at the Fiji Institute of Technology. 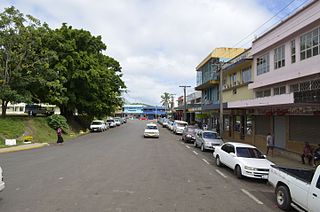 Rakiraki is a district in Fiji's Ra Province. It is located between Tavua and Korovou when travelling along the Kings Road, on the northern coast of Viti Levu, Fiji's largest island.

Naitasiri is one of the 14 provinces of Fiji and one of eight located on Viti Levu, Fiji's largest island.

Namosi is one of Fiji's fourteen provinces and one of eight based in Viti Levu, the largest island. Located to the west of Suva, the province covers 570 square kilometers. Its population of 7,871 at the 2017 census was the second smallest of any Fijian province.

Rewa is a province of Fiji. With a land area of 272 square kilometers, it includes the capital city of Suva and is in two parts — one including part of Suva's hinterland to the west and a noncontiguous area to the east, separated from the rest of Rewa by Naitasiri Province. The province had a population of 108,016 at the 2017 census, making it Fiji's third most populous.

Serua is one of Fiji's fourteen Provinces. Its 830 square kilometers occupy the southernmost areas of Viti Levu, being one of 8 provinces based on Fiji's largest island. It had a population of 15,461 at the 2007 census. 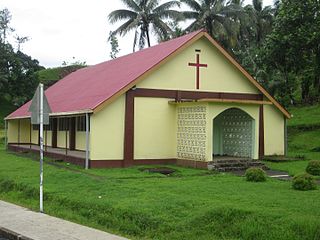 Tailevu is one of the 14 provinces of Fiji. One of eight provinces based in Viti Levu, Fiji's largest island, its 755 square kilometers occupy the south-eastern fringe of the island, along with some central areas. At the 2017 census, it had a population of 64,552, the fifth largest among the Provinces. The main urban area of Tailevu is Nausori with a population of 21,645 in 1996.

Vunikavikaloa is a settlement on the northern coasts of the Ra Province in Viti Levu, Fiji. It consists of a few schools and a hospitals, and sporting grounds. It is situated in the district of Nalawa. The area also consists of the ancient tombs of Fijian cannibal chiefs, and pottery has been found at this time going back to 1000 BC.

Taukei ni Waluvu is a Fijian phrase for "Native of the Flood." It is the traditional chiefly title of the warrior hill clan Siko-Natabutale of Nairukuruku village. The history of the clan from the mid- nineteenth century, represent the social structures of the chiefly system, religion and western culture that supported colonialism in Fiji. Tradition, Christianity and British indirect rule were combined to legitimize what was accepted as the right way to govern. Condemned by some modern day critics as exploitative, the Fijian chiefly system was the medium of native social interdependence and a traditional contract shared by the indigenous clans of pre-colonial Fiji, that was utilized for colonial rule. Since Independence the chiefly system has had to adapt to the demands of modernity. Anthropologist Arthur Capell in his study of early tribal migration within Fiji made the point that, "the history of Fiji is the history of chiefly families." The phrase in fact emphasized the hierarchical nature of Fijian traditional society where chiefly power was held sacred. The relationship between Chiefs and Westerners in especially Missionaries thus became a focal point for gathering insight into Fijian culture and tradition in the nineteenth century. James Turner a latter anthropologist found, "The chiefly families of Nairukuruku were the first in the eastern highlands of Viti Levu to declare their allegiance to the central government and as a result of this support their influence expanded throughout the area".

Navatu is a sub district in Cakaudrove; one of 3 provinces situated in Vanua Levu, the second largest island in Fiji. The sub-district, or "tikina" as it is known in the iTaukei language, comprises nine villages mainly occupying the eastern peninsular of the Natewa Bay. While Copra has been the main source of income for villages in the Navatu tikina, kava or yaqona is also becoming a fast growing commodity for villages within the Navatu sub-district.