Random House Webster's Unabridged Dictionary is a large American dictionary, first published in 1966 as The Random House Dictionary of the English Language: The Unabridged Edition. Edited by Jess Stein, it contained 315,000 entries in 2256 pages, as well as 2400 illustrations. The CD-ROM version in 1994 also included 120,000 spoken pronunciations. [1]

In the late 1950s, it was decided to publish an expansion of the American College Dictionary , which had been modestly updated with each reprinting since its publication. Under editors Jess Stein and Laurence Urdang, they augmented the American College Dictionary with large numbers of entries in all fields, primarily proper names, and published it in 1966 as The Random House Dictionary of the English Language: The Unabridged Edition. It was the first dictionary to use computers in its compilation and typesetting.

In his preface to the 1966 edition, Stein argued (p. vi) that the Random House Dictionary steers "a linguistically sound middle course" between the "lexicographer's Scylla and Charybdis: should the dictionary be an authoritarian guide to 'correct' English or should it be so antiseptically free of comment that it may defeat the user by providing him with no guidance at all?" [4] In 1982 Random House published The Random House ProofReader, a computer spell checker based on its dictionary. [5]

An expanded second edition of the printed dictionary, edited by Stuart Berg Flexner, appeared in 1987, revised in 1993. This edition adopted the Merriam-Webster Collegiate practice of adding dates for the entry of words into the language. Unlike the Collegiate, which cited the date of the first known citation, Random House indicated a range of dates. For example, where the Collegiate gave 1676, Random House might offer 1670–80. This second edition was described as permissive by T. R. Reid in the Washington Post. [6]

Random House incorporated the name Webster's into the dictionary's title after an appeals court overturned an injunction awarded to Merriam Webster restricting the name's use. [7] The name Random House Webster's is now used on many Random House publications. 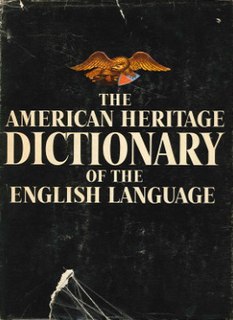 The American Heritage Dictionary of the English Language (AHD) is an American dictionary of English published by Boston publisher Houghton Mifflin, the first edition of which appeared in 1969. Its creation was spurred by the controversy over the perceived permissiveness of the Webster's Third New International Dictionary. The third edition had more than 350,000 entries and meanings. 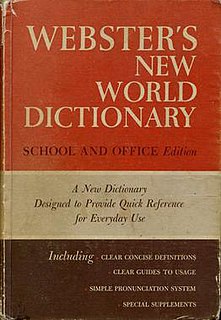 Webster's New World Dictionary of the American Language is an American dictionary first published in 1951 and since 2012 published by Houghton Mifflin Harcourt.

Stuart Berg Flexner (1928–1990) was a lexicographer, editor and author, noted for his books on the origins of American words and expressions, including I Hear America Talking and Listening to America; as co-editor of the Dictionary of American Slang and as chief editor of the Random House Dictionary, Second Edition. 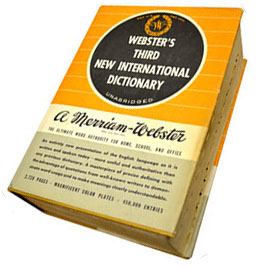 The English word twat is a vulgarism which literally means the vulva or vagina, and is used figuratively as a derogatory epithet. In British English the epithet denotes an obnoxious or stupid person of either sex, whereas in American English it is rarer and usually applied to a woman. In Britain the usual current pronunciation is ; the older pronunciation, still usual in America, is, reflected in the former variant spelling twot. The literal sense is first attested in 1656, the epithet in the 1930s. The word's etymology is uncertain. The American Heritage Dictionary suggests a conjectural Old English word *thwāt, "a cut", cognate with Old Norse þveit (thveit). Jonathon Green suggests a connection with twitchel, a dialect term for a narrow passage.