The Collins English Dictionary is a printed and online dictionary of English. It is published by HarperCollins in Glasgow. [1]

The edition of the dictionary in 1979 with Patrick Hanks as editor and Laurence Urdang as editorial director, was the first British English dictionary to be typeset from the output from a computer database in a specified format. This meant that every aspect of an entry was handled by a different editor using different forms or templates. Once all the entries for an entry had been assembled, they were passed on to be keyed into the slowly assembled dictionary database which was completed for the typesetting of the first edition. [ citation needed ]

In a later edition, they increasingly used the Bank of English established by John Sinclair at COBUILD to provide typical citations rather than examples composed by the lexicographer.

The unabridged Collins English Dictionary was published on the web on 31 December 2011 on CollinsDictionary.com, along with the unabridged dictionaries of French, German, Spanish and Italian. [3] The site also includes example sentences showing word usage from the Collins Bank of English Corpus, word frequencies and trends from the Google Ngrams project, and word images from Flickr.

In August 2012, CollinsDictionary.com introduced crowd-sourcing for neologisms, [4] [5] [6] whilst still maintaining overall editorial control to remain distinct from Wiktionary and Urban Dictionary. This followed an earlier launch of a discussion forum for neologisms in 2004. [7]

In May 2015, CollinsDictionary.com added 6,500 new Scrabble words to their Collins Official Scrabble Wordlist. The words are based on terms related to and influenced by slang, social media, food, technology, and more. [8] 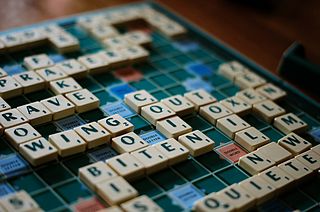 Scrabble is a word game in which two to four players score points by placing tiles, each bearing a single letter, onto a game board divided into a 15×15 grid of squares. The tiles must form words that, in crossword fashion, read left to right in rows or downward in columns and are included in a standard dictionary or lexicon.

V, or v, is the twenty-second and fifth-to-last letter in the modern English alphabet and the ISO basic Latin alphabet. Its name in English is vee, plural vees.

Webster's Dictionary is any of the English language dictionaries edited in the early 19th century by American lexicographer Noah Webster (1758–1843), as well as numerous related or unrelated dictionaries that have adopted the Webster's name in honor. "Webster's" has since become a genericized trademark in the United States for English dictionaries, and is widely used in dictionary titles.

The word(s) of the year, sometimes capitalized as "Word(s) of the Year" and abbreviated "WOTY", refers to any of various assessments as to the most important word(s) or expression(s) in the public sphere during a specific year.

The World Scrabble Championship (WSC) is the most-prestigious title in competitive English-language Scrabble. It was held in every odd year from 1991 to 2013. From the 2013 edition, it became an annual event. It has been an open event since 2014. Although the official brand name and organizations of the event have changed over the years, many Scrabble enthusiasts from more than 30 countries compete to become World Scrabble Champion.

Collins Scrabble Words is the word list used in English-language tournament Scrabble in most countries except the US, Thailand and Canada. The term SOWPODS is an anagram of the two abbreviations OSPD and OSW, these being the original two official dictionaries used in various parts of the world at the time. Although the two source dictionaries have now changed their respective titles, the term SOWPODS is still used by tournament players to refer to the combination of the two sources. There has not been any actual hard-copy list produced called SOWPODS, although the current Collins Scrabble Words, or CSW, is in effect the full SOWPODS list by a different name.

Euouae or Evovae is an abbreviation used as a mnemonic in Latin psalters and other liturgical books of the Roman Rite to indicate the distribution of syllables in the differentia or variable melodic endings of the standard psalm tones of Gregorian chant. It derives from the vowels in the Latin words saeculorum Amen, taken from the Gloria Patri, which ends with the phrase in saecula saeculorum. Amen.

NASPA Word List is the official word authority for tournament Scrabble in the USA and Canada under the aegis of NASPA Games. It is based on the Official Scrabble Players Dictionary (OSPD) with modifications to make it more suitable for tournament play. Its British and international-English counterpart is Collins Scrabble Words.

"Twat" is an English-language vulgarism which in American English means the vulva or vagina, and is used figuratively as a derogatory epithet. In British English, it is a common insult referring to an obnoxious or stupid person regardless of gender; in American English, it is rarer and usually used to insult a woman. In Britain, the usual pronunciation rhymes with "hat", while Americans most often use the older pronunciation that rhymes with "squat". This is reflected in the former variant spelling of "twot". 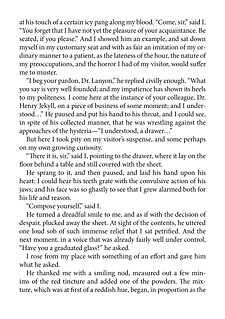 This list comprises widespread modern beliefs about English language usage that are documented by a reliable source to be misconceptions.