A ratchet or rattle, more specifically, cog rattle [1] is a musical instrument of the percussion family and a warning/signaling device. It operates on the principle of the ratchet device, using a gearwheel and a stiff board mounted on a handle, which rotates freely. Variants include the gragger (Yiddish : גראַגער) used in Judaism, the rapach, and the raganella.

The player holds the handle and swings the whole mechanism around. The momentum makes the board click against the gearwheel, producing a clicking and rattling noise. A popular design consists of a thick wooden cog wheel attached to a handle and two wooden flanges that alternately hit the teeth of the cog when the handle turns. Alternatively, smaller ratchets are sometimes held still or mounted and the handle turned rapidly by the player. The mounted ratchets allow for greater control of the duration and timing of the sound. This allows the ratchet to be used like a snare drum, placing sustained rolls in precise durations of time. Dynamics are controlled by the rate at which the ratchet is rotated. [2]

In Judaism, the gragger (also grogger or gregger; from Yiddish גראַגער) is used for the holiday of Purim. The gragger is used every time Haman's name is mentioned during the reading of the Megillah. [3] Because Haman persecuted the Jews, the noise is supposed to symbolically drown out his name (although every word of the Megillah, including Haman's name, must be heard clearly; therefore, the words are often repeated after the sounding of the gragger). The gragger originated in Jewish tradition to help make noise during the reading. [4]

The rattle is used in such compositions as Richard Strauss's Till Eulenspiegel's Merry Pranks and Arnold Schoenberg's Gurre-Lieder .

Up until the early 1970s, this type of rattle was a common sight used by fans at soccer and rugby matches.[ citation needed ]

In the 18th and 19th centuries, a policeman's rattle was used by British [5] and Australian [6] policemen to summon assistance. [7] They were used to warn of poison gas attack in the trenches of the First World War and issued to British police and ARP wardens during the Second World War, to warn of the presence of poison gas. [8] [9]

The raganella (Italian for "tree frog") is a percussion instrument common in the folk music of Calabria in southern Italy. Technically, the raganella is a "cog rattle," producing a sound that is enough of a "croak" to have derived the folk name of the instrument from the Italian name of the common tree-frog. The raganella is about the size of a breadbox and consists of a wooden frame into which are fastened four or five stiff but flexible wooden tines fastened to one side of the frame; the other ends of the tines are struck in rapid succession by a cog-wheel that is turned by a crank handle mounted on the side of the frame.

The rapach (Ukrainian : Рапач) is a larger version of the derkach, a ratchet. Rapachs are used by churches in the Prešov region of Slovakia by ethnic Ukrainians instead of bells during Easter.

Respighi asks for one in the first movement of his orchestral work Pini di Roma (Pines of Rome), as does Tchaikovsky in his ballet, The Nutcracker. It is also used in "Gnomus" in Ravel's orchestration of Mussorgsky's Pictures at an Exhibition . In orchestral percussion writing, a ratchet is used as a substitute. 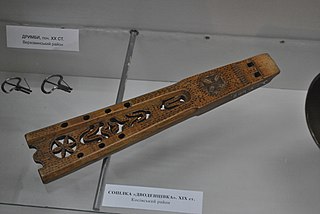 Sopilka is a name applied to a variety of woodwind instruments of the flute family used by Ukrainian folk instrumentalists. Sopilka most commonly refers to a fife made of a variety of materials and has six to ten finger holes. The term is also used to describe a related set of folk instruments similar to recorder, incorporating a fipple and having a constricted end.

The bubon is a Ukrainian percussive folk instrument, of the tambourine family. The bubon consists of a wooden ring with a diameter of up to 50 centimetres (20 in) which has a skin tightened over one or sometimes both sides. Occasionally, and increasingly in more modern times holes are made in the wooden sides into which metal (brass) rings are placed which rattle when the bubon is struck with the hand or a stick. The first mentions of the bubon date back to the 11th century. It was also a popular instrument among the Ukrainian Cossacks.

The buhay is a musical instrument that is used in Ukraine and is classified as a friction drum. Buhay is the Ukrainian word for great bittern, and its use as name of the instrument refers to the sound produced. The mating call or contact call of the male Buhay is a deep, sighing fog-horn or bull-like boom with a quick rise and an only slightly longer fall, easily audible from a distance of 3 mi on a calm night.

The basolia is a Ukrainian or Polish folk instrument of the bowed string family similar to the cello, although usually slightly larger and not as sophisticated in construction. The basolia was usually homemade and of very rough construction. Sometimes the soundboard was sewn to the body rather than glued. The strings are tuned in fifths.

The dentsivka is a woodwind musical instrument with a fipple (mouthpiece). In traditional instruments, the tuning varies with the length of the tube. It is made in a variety of different sizes: the piccolo, prima, alto, tenor, and bass.

The floyara (Floyarka) is a more perfected form of the sopilka. It is characterized as an open ended notched flute. The floyara is a pipe of approximately a metre in length. One end is sharpened and the breath is broken against one of the sides of the tube at the playing end. Six holes in groups of three are burnt out in the centre of the instrument. It was often played at funerals in the Carpathian mountains. The floyarka is a smaller version of the floyara and is similar to the sopilka and frilka. The floyara is approximately 60 cm long. The mouthpiece is sharpened into a cone-like edge and the instrument produces a sound similar to that of the flute. Shepherds were also able to accompany themselves with glutteral humming which produced an ostinato tone or drone. The floyarka is often called a frilka or sometimes zubivka in central Ukraine.

The kuvytsi, kugikly, kuvikly are the Ukrainian and Russian variant of pan pipes. Pan pipes have been found in archeological excavations in Ukraine that date back some 5,000 years. The instrument consists of several pipes each of which, when blown endwise, produces one sound. Various versions of the kuvytsi exist in Ukraine, such as the one-sided kuvytsi, which consist of a system of pipes from great to small in one lode or two-sided kuvytsi, which have their greatest pipe in the center. 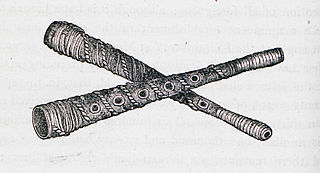 The rih is an instrument that was popular in Eastern Ukraine and Russia, with between three and six fingerholes. Usually they were made from a cylindrical reed with a cow's horn to form the bell. The mouthpiece usually has a single reed although occasionally double reed instruments can be found.

The Wooden Trumpet . The truba, or lihava, is an instrument of the surma-horn type, only with a mouthpiece like that of a standard trumpet made of wood. The instrument has seven to ten finger-holes and is used in contemporary folk instrument orchestras.

The Ukrainian surma is a type of shawm that had widespread use in the armies of the Cossack host. It is thought that the instrument was introduced into Ukraine from the Caucasus or Turkey where the similar instruments exist with related names such as zurna and surnai.

The volynka is a bagpipe. Its etymology comes from the region Volyn, Ukraine, where it was borrowed from Romania.

The torokhkalo - is a Ukrainian folk instrument used in folk ensembles whenever a drum is not available. It was also used by night guards to scare away intruders. The instrument is made from a piece of wood with a handle. A second piece of wood shorter than the first is joined to the original piece by metal rings near from the handle. A hole is drilled through both pieces at one end and a wooden bolt is placed through the hole so that the additional piece can move a small distance. When the instrument is spun around it produces a very loud sound amplified by the stillness of the night.

The briazkaltsia is a Ukrainian folk instrument consisting of copper or brass plates strung from a wire. In the past it was made of silver. When the instrument was shaken, it produced a jingling sound reminiscent of small bells. The instrument is now no longer used.

The zatula, also known as the rubal, rubel, kuchelka, kachanka, kachalka, and the rebra, is a Ukrainian folk musical instrument. It is primarily a household item used for washing and drying clothes, but it is occasionally used as a percussion instrument.

The pidkova, literally "Horseshoe". In some Ukrainian folk instrument ensembles a steel horseshoe dangling from the end of a gut string is struck with a piece of metal wire. This produced a high-pitched ringing sound similar to a triangle.

The batih is a thick stick that is rhythmically tapped on the floor in some Ukrainian folkloric groups. Pieces of metal or bottle-caps can be attached to the stick, which rattle when the stick strikes the ground. This adds to the percussive effect of the instrument.

The zubivka also known as a.

The taraban is a percussive drum-like folk instrument of Turkish origin, which was once used in Ukraine and Poland.

The resheto is a Ukrainian percussive folk instrument. The resheto consists of a wooden ring with a diameter of up to 50cm (20in). Initially the ring was strung with a sieve rather than a skin tightened over one side. The resheto is struck with the hand or a stick.