Reaching for the Moon is a 1930 American pre-Code black and white musical film. Originally released at 91 minutes; surviving versions are usually cut to 62 minutes. A 74-minute version aired in 1998 on USA cable channel AMC. The DVD version runs just under 72 minutes. The film's working title was Lucky Break and is known as Para alcanzar la Luna in Spain. It is not to be confused with the Fairbanks silent film Reaching for the Moon (1917).

The film was originally intended to be a musical with songs written by Irving Berlin but problems soon developed. From the start, Berlin found Edmund Goulding, the director, difficult to work with. Also by mid-1930 the studio realized that the public's demand for musicals had disappeared. So Goulding jettisoned many of Berlin's songs from the score. Although just five Berlin songs had been recorded, the film, even in its scaled-down form, proved very expensive to make. By the time the filming was complete, the costs had come to about a million dollars, a huge budget for the times, and one that virtually ruled out the possibility of the film returning a profit. [1]

The one song that was retained was "When the Folks High Up Do the Mean Low Down" introduced by Bing Crosby who had filmed it late at night after completing his work at the Cocoanut Grove. [2] Variety commented on this song specifically, saying: "None of the Berlin songs is left other than a chorus of hot numbers apparently named "Lower Than Lowdown" [sic]. Tune suddenly breaks into the running in the ship's bar when Bing Crosby, of the Whiteman Rhythm Boys, gives it a strong start for just a chorus which, in turn, is ably picked up by Miss Daniels, also for merely a chorus, and then in an exterior shot to the deck where June MacCloy sends the lyric and melody for a gallop of half a chorus. [3]

Wall Street wizard, Larry Day, new to the ways of love, is coached by his valet. He follows Vivian Benton on an ocean liner, where cocktails, laced with a "love potion", work their magic. He then loses his fortune in the market crash and feels he has also lost his girl.

Written by Irving Berlin
(heard instrumentally over the opening credits, as background music for a love scene, then briefly at the end)

Holiday Inn is a 1942 American musical film directed by Mark Sandrich and starring Bing Crosby and Fred Astaire, with Marjorie Reynolds, Virginia Dale, and Walter Abel. With music by Irving Berlin, the composer wrote twelve songs specifically for the film, the best known being "White Christmas". The film features a complete reuse of the song "Easter Parade", written by Berlin for the 1933 Broadway revue As Thousands Cheer. The film's choreography was by Danny Dare. 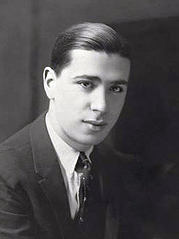 Sam Coslow was an American songwriter, singer, film producer, publisher and market analyst. Coslow was born in New York City. He began writing songs as a teenager. He contributed songs to Broadway revues, formed the music publishing company Spier and Coslow with Larry Spier and made a number of recordings as a performer.

"Ol' Man River" is a show tune from the 1927 musical Show Boat that contrasts the struggles and hardships of African Americans with the endless, uncaring flow of the Mississippi River. It is sung from the point of view of a black stevedore on a showboat, and is the most famous song from the show. The song is meant to be performed in a slow tempo; it is sung complete once in the musical's lengthy first scene by the stevedore "Joe" who travels with the boat, and, in the stage version, is heard four more times in brief reprises. Joe serves as a sort of musical one-man Greek chorus, and the song, when reprised, comments on the action, as if saying, "This has happened, but the river keeps rolling on anyway."

Blue Skies is a 1946 American musical comedy film directed by Stuart Heisler and starring Bing Crosby, Fred Astaire, and Joan Caulfield. Based on a story by Irving Berlin, the film is about a dancer who loves a showgirl who loves a compulsive nightclub-opener who can't stay committed to anything in life for very long. Produced by Sol C. Siegel, Blue Skies was filmed in Technicolor and released by Paramount Pictures. The music, lyrics, and story were written by Irving Berlin, with most of the songs recycled from earlier works.

"Blue Skies" is a popular song, written by Irving Berlin in 1926.

"There's No Business Like Show Business" is an Irving Berlin song, written for the 1946 musical Annie Get Your Gun and orchestrated by Ted Royal. The song, a slightly tongue-in-cheek salute to the glamour and excitement of a life in show business, is sung in the musical by members of Buffalo Bill's Wild West Show in an attempt to persuade Annie Oakley to join the production. It is reprised three times in the musical.

"Count Your Blessings " is a popular song written by Irving Berlin and used in the 1954 film White Christmas. It is commonly performed as a Christmas song, although the lyrics make no reference to the December holiday.

June MacCloy was an American actress and singer in the 1930s and 1940s.

White Christmas is a 1954 American musical film directed by Michael Curtiz and starring Bing Crosby, Danny Kaye, Rosemary Clooney, and Vera-Ellen. Filmed in Technicolor, it features the songs of Irving Berlin, including a new version of the title song, "White Christmas", introduced by Crosby in the 1942 film Holiday Inn.

"Swanee" is an American popular song written in 1919 by George Gershwin, with lyrics by Irving Caesar. It is most often associated with singer Al Jolson.

Going Hollywood is a 1933 American pre-Code musical film directed by Raoul Walsh and starring Marion Davies and Bing Crosby. It was written by Donald Ogden Stewart and based on a story by Frances Marion. Going Hollywood was released by Metro-Goldwyn-Mayer on December 22, 1933.

"They Say It's Wonderful" is a popular song written by Irving Berlin for the musical Annie Get Your Gun (1946), where it was introduced by Ethel Merman and Ray Middleton. A film version in 1950 again featured the song when it was performed by Howard Keel and Betty Hutton. More recently it was performed in an episode of The Marvelous Mrs. Maisel by Darius de Haas. 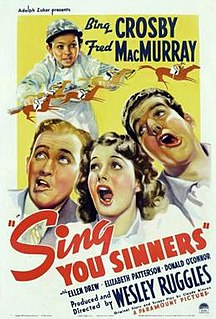 Sing You Sinners is a 1938 American musical comedy film directed by Wesley Ruggles and starring Bing Crosby, Fred MacMurray, Ellen Drew, and Donald O'Connor. Written by Claude Binyon, the film is about three singing brothers who go to California to find their fortune. Initially the film was to be titled "The Unholy Beebes" and then "Harmony for Three" before finishing with "Sing You Sinners". Filming took place in April/May 1938 in Hollywood. Race track scenes were filmed at the Pomona Fairgrounds and at Santa Anita using two dozen of Crosby's horses. Sing You Sinners was premiered on August 5, 1938 at the Del Mar racetrack with the New York premiere taking place on August 16.

"Isn't This a Lovely Day?" is a popular song written by Irving Berlin for the 1935 film Top Hat, where it was introduced by Fred Astaire in the scene where his and Ginger Rogers' characters are caught in a gazebo during a rainstorm. The lyric is an example of a song which turns a bad situation into a love song, a common style for Irving Berlin, as in I've Got My Love to Keep Me Warm and Let's Have Another Cup of Coffee.

Double or Nothing is a 1937 American musical comedy film directed by Theodore Reed and starring Bing Crosby, Martha Raye, Andy Devine, Mary Carlisle and William Frawley. Based on a story by M. Coates Webster, the film is about a dying millionaire who instructs his lawyer to drop four purses on the streets of New York City, which are found and returned by four honest people. According to the will, each of them is given five thousand dollars, which they must double within thirty days in order to claim one million dollars. Greedy relatives, who were cut from the will, try to thwart each one's plans. The film features the popular song "The Moon Got in My Eyes".

Selections from Irving Berlin's White Christmas is an album with songs from the 1954 movie, White Christmas. Among the featured artists are Bing Crosby, Rosemary Clooney, Danny Kaye, and Trudy Stevens, with Peggy Lee, who was not in the movie, singing some parts. It is one of the last 78 rpm albums Decca produced. 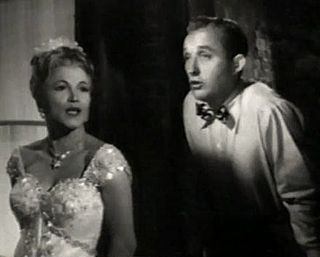 Mr. Music is a 1950 film starring Bing Crosby and Nancy Olson, directed by Richard Haydn, and released by Paramount Pictures. It is based on the play Accent on Youth written by Samson Raphaelson. Filming took place from October to December 1949 in Hollywood.

The Star Maker is a 1939 American musical film directed by Roy Del Ruth, written by Frank Butler, Don Hartman and Arthur Caesar, and starring Bing Crosby, Louise Campbell, Linda Ware, Ned Sparks, Laura Hope Crews, Janet Waldo and Walter Damrosch. Filming started in Hollywood on April 17, 1939 and was finished in June. The film was released on August 25, 1939, by Paramount Pictures, and had its New York premiere on August 30, 1939. It was the only film in which Crosby played a happily married man.