The Reptile Database is a scientific database that collects taxonomic information on all living reptile species (i.e. no fossil species such as dinosaurs). The database focuses on species (as opposed to higher ranks such as families) and has entries for all currently recognized ~13,000 species [1] and their subspecies, although there is usually a lag time of up to a few months before newly described species become available online. The database collects scientific and common names, synonyms, literature references, distribution information, type information, etymology, and other taxonomically relevant information.

The database was founded in 1995 as EMBL Reptile Database [2] when the founder, Peter Uetz, was a graduate student at the European Molecular Biology Laboratory (EMBL) in Heidelberg, Germany. Thure Etzold had developed the first web interface for the EMBL DNA sequence database which was also used as interface for the Reptile Database. In 2006 the database moved to The Institute of Genomic Research (TIGR) and briefly operated as TIGR Reptile Database [3] until TIGR was merged into the J Craig Venter Institute (JCVI) where Uetz was an associate professor until 2010. Since 2010 the database has been maintained on servers in the Czech Republic under the supervision of Peter Uetz and Jirí Hošek, a Czech programmer. [4] The database celebrated its 25th anniversary together with AmphibiaWeb which had its 20th anniversary in 2021. [5]

As of September 2020, the Reptile Database lists about 11,300 species (including another ~2,200 subspecies) in about 1200 genera (see figure), and has more than 50,000 literature references and about 15,000 photos. The database has constantly grown since its inception with an average of 100 to 200 new species described per year over the preceding decade. [6] Recently, the database also added a more or less complete list of primary type specimens. [7]

Relationship to other databases

The Reptile Database has been a member of the Species 2000 project that has produced the Catalogue of Life (CoL), a meta-database of more than 150 species databases that catalog all living species on the planet. [8] The CoL provides taxonomic information to the Encyclopedia of Life (EoL). The Reptile Database also collaborates with the World Register of Marine Species (WoRMS), the citizen science project iNaturalist, [9] and has links to the IUCN Redlist database. The NCBI taxonomy database links out to the Reptile Database. 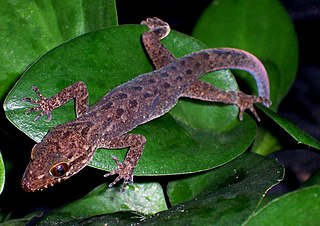 Cyrtodactylus is a diverse genus of Asian geckos, commonly known as bent-toed geckos, bow-fingered geckos, and forest geckos. The genus has at least 300 described species as of 2020, which makes it the largest of all gecko genera.

Antaresia is a genus of pythons, nonvenomous snakes found in Australia. The genus is known by the common name Children's pythons, the name of the type species. Gray named it in honour of his mentor, John George Children, who was a curator of the zoological collection at the British Museum around that time. It contains the smallest members of the Pythonidae. Currently, five species are recognized, although they were all considered part of the same species until recently. A newly described form called the pygmy banded python may be a distinct species, but analysis has not yet been performed on this animal. The largest recorded examples of Antaresia species have all been males, suggesting males of the known species in this genus may compete for females. This behavior has never been witnessed in the wild, and has only been witnessed in captive specimens.

Xenopeltis the sunbeam snakes, are the sole genus of the monotypic family Xenopeltidae, the species of which are found in Southeast Asia. Sunbeam snakes are known for their highly iridescent scales. Currently, two species are recognized. Studies of DNA suggest that the xenopeltids are most closely related to the Mexican burrowing python, Loxocemus bicolor, and to the true pythons of Pythonidae. 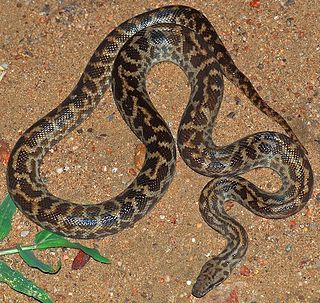 The spotted python, eastern small-blotched python, or eastern children's python is a python species found in northern Australia and New Guinea. It is a popular pet among Australian reptile enthusiasts and other reptile enthusiasts abroad due to its small size and even temperament. No subspecies were originally recognized. However, two subspecies are currently recognized as of 2020; A. maculosa maculosa and A maculosa peninsularis. The spotted pythons of New Guinea were reclassified as their own unique species, A. papuensis or the Papuan spotted python, in the same study that discovered the two mainland subspecies.

The Cylindrophiidae are a monotypic family of secretive, semifossorial, non-venomous snakes containing the genus Cylindrophis found in southeastern Asia. These are burrowing snakes and most have a banded pattern on the belly. Currently, thirteen species are recognized, with no subspecies. Common names include Asian pipe snakes or Asian cylinder snakes.

Boiga beddomei, commonly known as Beddome's cat snake, is a species of rear-fanged snake in the family Colubridae. The species is endemic to the Western Ghats of India, in Maharashtra, Gujarat and Goa states.

The Cape cobra, also called the yellow cobra, is a moderate-sized, highly venomous species of cobra inhabiting a wide variety of biomes across southern Africa including arid savanna, fynbos, bushveld, desert and semi-desert regions. The species is diurnal and is a feeding generalist, preying on a number of different species and carrion. Predators of this species include birds of prey, honey badgers and various species of mongoose. The Cape cobra is also known as the "geelslang" and "bruinkapel" in South Africa. Afrikaans speaking South Africans also refer to the Cape cobra as "koperkapel", mainly because of a rich yellow colour variation. This species has no known subspecies.

Atheris is a genus of venomous vipers known as bush vipers. They are found only in tropical subsaharan Africa and many species have isolated and fragmented distributions due to their confinement to rain forests. In an example of convergent evolution, they show many similarities to the arboreal pit vipers of Asia and South America. Seventeen species are currently recognized.

Hobart Muir Smith, born Frederick William Stouffer, was an American herpetologist. He is credited with describing more than 100 new species of American reptiles and amphibians. In addition, he has been honored by having at least six species named after him, including the southwestern blackhead snake, Smith's earth snake, Smith's arboreal alligator lizard, Hobart's anadia, Hobart Smith's anole, and Smith's rose-bellied lizard. At 100 years of age, Smith continued to be an active and productive herpetologist. Having published more than 1,600 manuscripts, he surpassed all contemporaries and remains the most published herpetologist of all time. 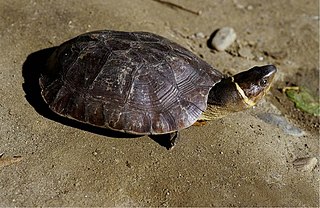 Siebenrockiella is a small genus of black marsh turtles. It used to be monotypic but now has two species with the addition of the Philippine forest turtle. The genus was originally erected in 1869 by John Edward Gray under the name Bellia, commemorating Thomas Bell, but this name is a junior homonym of Bellia Milne-Edwards, 1848, a crustacean genus. The replacement name, Siebenrockiella, was published in 1929 by Wassili Adolfovitch Lindholm, and commemorates Friedrich Siebenrock.

The Egyptian cobra is a species of venomous snake in the family Elapidae, classified within the subgenera Uraeus. It averages roughly 1.4 metres (4.6 ft), with the longest recorded specimen measuring 2.59 metres (8.5 ft).

Kentropyx calcarata, commonly known as the striped forest whiptail, is a species of lizard endemic to South America.

Draco guentheri, commonly known as Günther's flying lizard is a species of agamid "flying dragon" endemic to the Philippines.

The Apalachicola snapping turtle is a proposed species that lives in the Apalachicola River, United States. It has traditionally been included as part of the widespread species M. temminckii, but an analysis in 2014 recommended treating it as distinct. A study published the following year considered this change unwarranted and recommended that M. apalachicolae should be considered a junior synonym of M. temminckii, and this is followed by the Reptile Database, IUCN's Tortoise and Freshwater Turtle Specialist Group, and the Committee On Standard English And Scientific Names.

Oligodon annulifer, also known as the ringed kukri snake, is a colubrid snake endemic to the island of Borneo.

The Wells and Wellington affair was a dispute about the publication of three papers in the Australian Journal of Herpetology in 1983 and 1985. The periodical was established in 1981 as a peer-reviewed scientific journal focusing on the study of amphibians and reptiles (herpetology). Its first two issues were published under the editorship of Richard W. Wells, a first-year biology student at Australia's University of New England. Wells then ceased communicating with the journal's editorial board for two years before suddenly publishing three papers without peer review in the journal in 1983 and 1985. Coauthored by himself and high school teacher Cliff Ross Wellington, the papers reorganized the taxonomy of all of Australia's and New Zealand's amphibians and reptiles and proposed over 700 changes to the binomial nomenclature of the region's herpetofauna.