Robin Colleen Carnahan (born August 4, 1961) is an American businesswoman and lawyer and former Missouri Secretary of State who is the senate-confirmed Administrator of General Services. She is the daughter of Missouri politicians Mel and Jean Carnahan. In 2010, she was the Democratic nominee for the U.S. Senate to replace retiring Republican Senator Kit Bond. She was then a senior advisor at the global strategy firm Albright Stonebridge Group. In 2013, Carnahan was named a fellow at the University of Chicago Institute of Politics. In February 2016, she joined the General Services Administration as the director of the state and local practice at 18F. [1] On April 6, 2021, President Joe Biden nominated her to serve as the administrator of the General Services Administration. [2] Her nomination was confirmed by the US Senate on June 23, 2021, [3] and she was sworn into office on July 2. [4]

Carnahan received her Juris Doctor from the University of Virginia School of Law in 1986, where she was the executive editor of the Virginia Journal of International Law .

Following graduation from law school, she returned to Missouri to practice business and corporate law with the St. Louis firm of Thompson & Mitchell.

In 1990, Carnahan went to work in central Europe as part of a team from the National Democratic Institute. In this role, she helped draft voting laws, train new political leaders and monitor elections in Hungary and Czechoslovakia. Since then, she has led international election observer delegations and promoted democracy in a dozen countries and currently serves on NDI's board of directors. [5] During the Clinton Administration, Carnahan served as special assistant to the chairman of the Export–Import Bank of the United States, working on programs to help U.S. companies increase exports of US goods and services. [6] Later, Carnahan founded and managed an international trade and business consulting firm to advise public and privately held US companies expanding into global markets.

As of December 2005, Carnahan continued to manage her family's farm and Angus cattle operation outside of Rolla, Missouri. [7] [8]

On November 2, 2004, Carnahan was elected as Missouri's 38th secretary of state. In her first bid for elected office, she defeated then-Speaker of the Missouri House of Representatives Catherine Hanaway by over 120,000 votes. [9] In November 2008, Carnahan was reelected with nearly 62% of the vote by receiving over 1.7 million votes, the most votes ever cast for a candidate in Missouri history. In 2005 she was named one of 24 "rising stars" in American politics by the Aspen Institute's Rodel Foundation, a leading nonpartisan think tank.

As CEO of a $50mm government agency, Carnahan emerged as a national leader in pioneering the use of innovative technology to save money and improve government service delivery for businesses and citizens. To reduce red-tape and costs for businesses, she worked closely with business leaders to identify service improvements, increase online business filings by more than 80%, streamline regulations and reduce filing fees by over $19 million. [10] As the state's securities regulator during the 2008 financial crisis, Carnahan gained national recognition for negotiating record settlements on behalf of investors in a number of high-profile cases, including a national settlement in August 2008 in which Wachovia Securities agreed to repay over 40,000 investors who had nearly $9 billion frozen in auction-rate securities accounts. [11] [12]

In 2008, Carnahan worked with Missouri's local election authorities to ensure all eligible Missourians had access to the ballot box. She has been a strong advocate for early voting, paper ballots and better training for Election Day poll workers. [13]

Carnahan's tenure in office focused on providing outstanding customer service to Missouri businesses, financial professionals, investors, voters, genealogists, researchers and hundreds of thousands of other customers. In the closeout audit at the end of her term in 2013, Republican State Auditor Thomas Schweich gave Carnahan's office the highest possible performance rating of "excellent". [14]

On February 3, 2009, Carnahan announced she would run for the United States Senate in 2010 to replace retiring U.S. Senator Kit Bond, saying it's time to "stop the political bickering and start solving problems". [15] She was elected the Democratic nominee in the primary election held August 3, 2010.

After leaving public office, Carnahan joined the global strategy firm Albright Stonebridge Group, founded by former U.S. Secretary of State Madeleine Albright. [19] She remained in Missouri and began advising civic technology firms and organizations seeking to help government deliver better services for citizens and cut costs for taxpayers through smarter use of technology. She is a board member and serviced as a strategic adviser for LaunchCode, [20] an organization that connects people to economic opportunity through paid apprenticeships in programming and technology. She has been regularly featured in the media and spoken before numerous national groups and congressional and legislative committees on finance, regulatory and elections issues.

In February 2016, Carnahan joined the General Services Administration as the director of the state and local practice of 18F. [22] There, she leads a team of digital technology consultants who provide consulting and acquisition services to help state and local agencies use the best practices of human-centered design, agile, and modular procurement. [23]

Carnahan often speaks about using innovation and technology to improve delivery of government services, including at Tech@State, [24] the Code for America Summit, [25] Personal Democracy Forum [26] and the 2016 IT Solutions Management Conference, [27] FedScoop named Carnahan as one of the Top Women in Tech 2017. [28]

Carnahan comes from a family that has been active in Missouri politics for several generations. Her grandfather, A. S. J. Carnahan, was elected to the House of Representatives as a Democrat from south-central Missouri. He served only one term before being defeated in 1946, but ran again in 1948 and won. Carnahan served in the House for six more terms and in 1961 was appointed by President John F. Kennedy as the first American ambassador to Sierra Leone. Her father, Mel Carnahan, served in the state legislature, as State Treasurer, Lieutenant Governor and as Governor of Missouri from 1993 until his death in 2000 in a plane crash while campaigning for the US Senate against incumbent John Ashcroft. Her mother, Jean Carnahan, became the first woman from Missouri to serve in the United States Senate from 2001 to 2003 when she was appointed to fill the seat Gov. Carnahan won posthumously.

Her brother Russ Carnahan was a member of Congress and represented the southern portion of the St. Louis Metropolitan Area. Her brother Tom Carnahan founded Wind Capital Group. Robin Carnahan is married to Juan Carlos Antolinez.

On February 27, 2006, Carnahan announced that she had been diagnosed with breast cancer. She continued to serve as Secretary of State while undergoing treatment and her cancer is in remission. [29]

Christopher Samuel "Kit" Bond is an American attorney, politician and former United States Senator from Missouri and a member of the Republican Party. First elected to the U.S. Senate in 1986, he defeated Democrat Harriett Woods by a margin of 53%–47%. He was re-elected in 1992, 1998, and 2004. On January 8, 2009, he announced that he would not seek re-election to a fifth term in 2010, and was succeeded by fellow Republican Roy Blunt on January 3, 2011. Following his retirement from the Senate, Bond became a partner at Thompson Coburn.

Melvin Eugene Carnahan was an American lawyer and politician who served as the 51st Governor of Missouri from 1993 until his death in a plane crash in 2000. A Democrat, he was elected posthumously to the U.S. Senate; his widow, Jean, served in his stead for two years until a special election.

William Lacy Clay Jr. is an American politician who served as the U.S. Representative from Missouri's 1st congressional district from 2001 to 2021. His congressional career ended after he lost in a Democratic primary to Cori Bush in 2020, after successfully defeating her in the 2018 primary.

Jean Anne Carpenter Carnahan is an American politician and writer who was the First Lady of Missouri from 1993 to 2000, and served as the state's junior United States Senator from 2001 to 2002. A Democrat, she was appointed to fill the Senate seat of her husband Mel Carnahan, who had been posthumously elected, becoming the first woman to represent Missouri in the U.S. Senate. 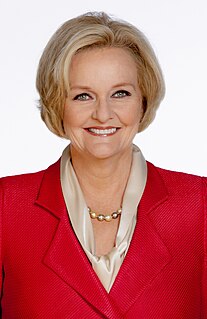 Claire Conner McCaskill is an American politician who served as a United States Senator from Missouri from 2007 to 2019 and as State Auditor of Missouri from 1999 to 2007. 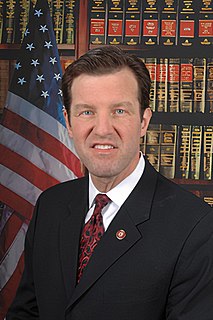 John Russell Carnahan is an American politician from the state of Missouri. A member of the Democratic Party, he served as the U.S. Representative for Missouri's 3rd congressional district from 2005 to 2013.

The 2006 United States Senate election in Missouri was held November 7, 2006, to decide who would serve as senator for Missouri between January 3, 2007, and January 3, 2013. The incumbent was Republican Jim Talent. Talent was elected in a special election in 2002 when he narrowly defeated incumbent Democrat Jean Carnahan. Carnahan had been appointed to the Senate seat following the posthumous election of her husband Mel Carnahan, who had died in a plane crash shortly before the 2000 election. Talent's Democratic opponent was Missouri State Auditor Claire McCaskill. Early on the morning of November 8, Talent conceded defeat to McCaskill, having faced considerable political headwinds. Talent lost the election with 47% of the vote, to 49.6% of the vote for McCaskill. 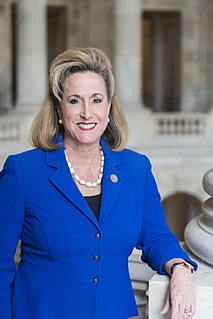 Ann Louise Wagner is an American politician and diplomat serving as the U.S. Representative for Missouri's 2nd congressional district since 2013. A member of the Republican Party, she was the United States Ambassador to Luxembourg from 2005 to 2009. 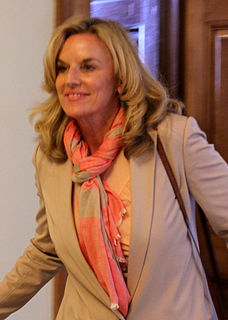 Sarah Steelman is an American Republican politician from Missouri and State Treasurer from 2005 to 2009. She is currently serving in the Office of Administration in Governor Mike Parson’s administration. She did not run for re-election as state treasurer in 2008, having run for Governor, and was succeeded in office by Democrat Clint Zweifel on January 12, 2009. She was listed in a 2008 article in the New York Times as among seventeen women who may someday run for President of the United States. On November 29, 2010, Steelman announced she would run for the U.S. Senate in 2012. She was defeated in the Republican primary by U.S. Representative Todd Akin. 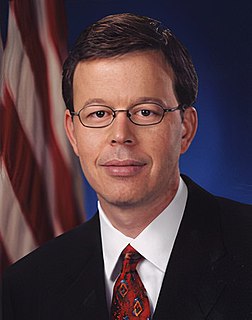 James Matthes Talent is an American politician and former U.S. Senator from Missouri from 2002 to 2007. He is a Republican and resided in the St. Louis area while serving in elected office. He identifies with the conservative wing of the Republican Party, being outspoken on judicial appointments, abortion, flag burning, and defense issues.

The 2002 United States Special Senate election in Missouri was held on November 5, 2002 to decide who would serve the rest of Democrat Mel Carnahan's term, after he died while campaigning and posthumously won the 2000 election. The winner would serve four more years until the next election in 2006. Missouri Governor Roger Wilson appointed Carnahan's wife Jean, also a Democrat, to serve temporarily. She then decided to run to serve the remainder of the term, but she was narrowly defeated by Republican nominee Jim Talent. 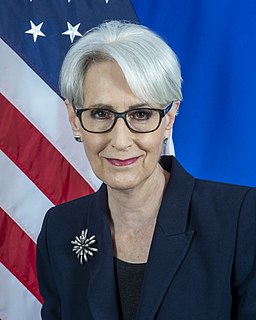 Wendy Ruth Sherman is an American professor and diplomat who is serving as the United States Deputy Secretary of State since April 2021. She is a professor of public leadership and director of the Center for Public Leadership at the Harvard Kennedy School, a senior counselor at Albright Stonebridge Group, and a senior fellow at Harvard Kennedy School's Belfer Center for Science and International Affairs. 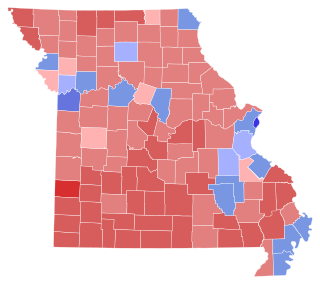 Jill Schupp is a Democratic member of the Missouri Senate, representing the 24th district consisting of the western suburbs of St. Louis. Previously, Schupp represented the 88th district in the Missouri House of Representatives. On December 3, 2019, she announced she would run for Missouri's 2nd congressional district in 2020. 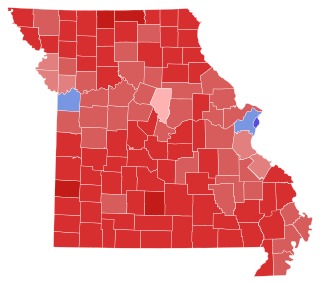 Nicole Galloway is an American accountant and politician who has served as the State Auditor of Missouri since 2015. She was the Democratic nominee for Governor of Missouri in the 2020 election, losing to incumbent Republican Mike Parson.

Karla May is an American politician who has served in the Missouri Senate since January 2019. She previously served in the Missouri House of Representatives from 2011. A member of the Democratic Party, she was first elected in 2010. Having served the maximum allowable term in the state house, in 2018 she announced her intention to run for election to the Missouri State Senate.