The Aspen Institute is an international nonprofit organization founded in 1949 as the Aspen Institute for Humanistic Studies. [2] The Institute and its international partners promote the creation of a free, just, and equitable society in a nonpartisan and nonideological setting through seminars, policy programs, conferences, and leadership development initiatives. The institute is headquartered in Washington, D.C., United States, and has campuses in Aspen, Colorado (its original home), and near the shores of the Chesapeake Bay at the Wye River in Maryland. It has partner Aspen Institutes in Berlin, Rome, Madrid, Paris, Lyon, Tokyo, New Delhi, Prague, Bucharest, Mexico City, and Kyiv, as well as leadership initiatives in the United States and on the African continent, India, and Central America.

The Aspen Institute is largely funded by foundations such as the Carnegie Corporation, the Rockefeller Brothers Fund, the Gates Foundation, the Lumina Foundation, and the Ford Foundation, by seminar fees, and by individual donations. Its board of trustees includes leaders from politics, government, business and academia who also contribute to its support. A report by the Center for International Policy's Foreign Influence Transparency Initiative of the top 50 think tanks on the University of Pennsylvania's Global Go-To Think Tanks rating index found that during the period 2014-2018 the Aspen Institute received the fifth-highest amount of funding from outside the United States compared to other think tanks, with a total of more than US$8 million from donors that originated primarily in Western democracies but also "sizeable donations from undemocratic regimes in Saudi Arabia and the United Arab Emirates." [3]

The institute was largely the creation of Walter Paepcke, a Chicago businessman who had become inspired by the Great Books program of Mortimer Adler at the University of Chicago. [4] In 1945, Paepcke visited Bauhaus artist and architect Herbert Bayer, AIA, who had designed and built a Bauhaus-inspired minimalist home outside the decaying former mining town of Aspen, in the Roaring Fork Valley. Paepcke and Bayer envisioned a place where artists, leaders, thinkers, and musicians could gather. Shortly thereafter, while passing through Aspen on a hunting expedition, oil industry maverick Robert O. Anderson (soon to be founder and CEO of Atlantic Richfield) met with Bayer and shared in Paepcke's and Bayer's vision. In 1949, Paepcke organized a 20-day international celebration for the 200th birthday of German poet and philosopher Johann Wolfgang von Goethe. The celebration attracted over 2,000 attendees, including Albert Schweitzer, José Ortega y Gasset, Thornton Wilder, and Arthur Rubinstein. [5]

In 1949, Paepcke founded the Aspen Institute; and later the Aspen Music Festival and eventually (with Bayer and Anderson) the International Design Conference at Aspen (IDCA). [6] Paepcke sought a forum "where the human spirit can flourish", especially amid the whirlwind and chaos of modernization. He hoped that the Institute could help business leaders recapture what he called "eternal verities": the values that guided them intellectually, ethically, and spiritually as they led their companies. Inspired by philosopher Mortimer Adler's Great Books seminar at the University of Chicago, Paepcke worked with Anderson to create the Aspen Institute Executive Seminar. [7] In 1951, the Institute sponsored a national photography conference attended by Ansel Adams, Dorothea Lange, Ben Shahn, Berenice Abbott, and other notables. During the 1960s and 1970s, the Institute added organizations, programs, and conferences, including the Aspen Center for Physics, the Aspen Strategy Group, Communications and Society Program and other programs that concentrated on education, communications, justice, Asian thought, science, technology, the environment, and international affairs.

In 1979, through a donation by Corning Glass industrialist and philanthropist Arthur A. Houghton Jr., the Institute acquired a 1,000-acre (4 km2) campus on the eastern shore of the Chesapeake Bay in Maryland, known today as the Wye River Conference Centers. [8]

In 1996, the first Socrates Program seminar was hosted.[ citation needed ]

In 2005, it held the first Aspen Ideas Festival, featuring leading minds from around the world sharing and speaking on global issues. The institute, along with The Atlantic , hosts the festival annually. It has trained philanthropists such as Carrie Morgridge. [9]

Since 2013, [10] the Aspen Institute together with U.S. magazine The Atlantic and Bloomberg Philanthropies has participated in organizing the annual CityLab event, a summit dedicated to develop strategies for the challenges of urbanization in today's cities. [11]

In April 2020, the company received approximately $8 million in federally backed small business loans as part of the Paycheck Protection Program. The company received scrutiny over this loan, which meant to protect small and private businesses. The Washington Post noted their large endowment and membership of billionaires made this problematic. Dele Olojede, a fellow at the institute, called it "contrary to the stated purpose of this institute", that "one of America’s most elite institutions thinks it is okay to take the money", going on to say "Those who purport to be values-based and public-spirited leaders cannot at the same time put self interest first, when there is so much human suffering and death". [14] The day after Olojede and the Washington Post highlighted the funding, Aspen Institute announced they would return it, stating "Upon listening to our communities and further reflection, we have made the decision to return the loan". [15]

Community Colleges which succeed in attaining exceptional results for all students during their time in college and as post-graduates are awarded the Aspen Prize for Community College Excellence. [16] [17]

Recipients to date include:

The Financial Times called the Faculty Pioneers and Dissertation Proposal Awards the "Oscars of the business school world". These honor business school instructors with an outstanding track record of leadership and risk-taking in ensuring that the MBA curriculum incorporates social, environmental and ethical issues. [21]

Recipients in the Category "Lifetime Achievement" include:

Community Colleges which demonstrate the provision of outstanding technical education and successfully link students, regardless of their race, ethnicity, family income or gender, with STEM careers as a gateway to economic mobility, are eligible to receive the Excellence and Equity in Community College STEM Award. The prize, awarded in co-operation of the Aspen Institute and Siemens Foundation, provides leading college staff with a benchmark standard of development and technical programs which foster equitable student success by highlighting exemplary practices of the winning programs. [23] [24]

Herbert Bayer was an Austrian and American graphic designer, painter, photographer, sculptor, art director, environmental and interior designer, and architect. He was instrumental in the development of the Atlantic Richfield Company's corporate art collection until his death in 1985.

Long Island University (LIU) is a private university with two main campuses, LIU Post and LIU Brooklyn, in the U.S. state of New York. It offers more than 500 academic programs at its main campuses, online, and at multiple non-residential. LIU has NCAA Division I athletics and hosts the annual George Polk Awards in journalism.

The Woodrow Wilson International Center for Scholars, located in Washington, D.C., is a United States Presidential Memorial that was established as part of the Smithsonian Institution by an act of Congress in 1968. It is also a highly recognized think tank, and was ranked among the top ten in the world in 2013.

Walter Paepcke was a U.S. industrialist and philanthropist prominent in the mid-20th century. A longtime executive of the Chicago-based Container Corporation of America, Paepcke is best noted for his founding of the Aspen Institute and the Aspen Skiing Company in the early 1950s, both of which helped transform the town of Aspen, Colorado into an international resort destination and popularize the sport of skiing in the United States.

Walter Isaacson is an American author, journalist, and professor. He has been the President and CEO of the Aspen Institute, a nonpartisan policy studies organization based in Washington, D.C., the chair and CEO of CNN, and the editor of Time.

Dele Olojede is a Nigerian journalist and former foreign editor for Newsday. He is a winner of the Pulitzer Prize for his work covering the aftermath of the Rwandan genocide. He serves on the board of EARTH University, in Costa Rica, and of The Markup, the New York-based investigative journalism organization focused on the impact of large tech platforms and their potential for human manipulation. He is the founder and host of Africa In the World, a hearts and minds festival held annually in Stellenbosch, in the Cape winelands of South Africa. He was a patron of the Etisalat Prize for Literature.

Eduardo José Padrón is President Emeritus of Miami Dade College (MDC). An economist by training, Padrón earned his Ph.D. from the University of Florida. After serving as a faculty member at MDC, he became the school's president in 1995. Time named him one of the ten best college presidents in 2009, and he was awarded the Presidential Medal of Freedom in 2016.

Campbell's Field was a 6,425-seat baseball park in Camden, New Jersey, United States that hosted its first regular season baseball game on May 11, 2001. The ballpark was home to the Rutgers–Camden college baseball team, and until 2015 was home to the Camden Riversharks of the independent Atlantic League of Professional Baseball. The naming rights were owned by the Camden-based Campbell Soup Company, which paid $3 million over ten years. Stadium demolition started in mid-December 2018.

The Aspen Network of Development Entrepreneurs (ANDE) is an international network of organizations that works to promote entrepreneurship in developing countries. Services and programming efforts focus on providing financial support for small and growing businesses and entrepreneurs whose organizations are too large for microfinance loans and too small for traditional bank loans. The organization was launched in January 2009, as a public policy initiative of the Aspen Institute. 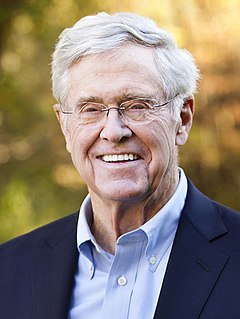 Charles de Ganahl Koch is an American billionaire businessman and philanthropist. As of April 2021, he was ranked as the 15th-richest person in the world on Bloomberg Billionaires Index, with an estimated net worth of $63.1 billion. Koch has been co-owner, chairman, and chief executive officer of Koch Industries since 1967, while his late brother David Koch served as executive vice president. Charles and David each owned 42% of the conglomerate. The brothers inherited the business from their father, Fred C. Koch, then expanded the business. Originally involved exclusively in oil refining and chemicals, Koch Industries now includes process and pollution control equipment and technologies, polymers and fibers, minerals, fertilizers, commodity trading and services, forest and consumer products, and ranching. The businesses produce a wide variety of well-known brands, such as Stainmaster carpet, the Lycra brand of spandex fiber, Quilted Northern tissue, and Dixie Cup.

The Wheeler–Stallard House is located on West Bleeker Street in Aspen, Colorado, United States. It is an 1880s brick structure built in the Queen Anne architectural style, and renovated twice in the 20th century. In 1975 it was listed on the National Register of Historic Places. 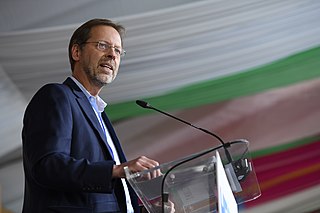 Daniel R. Porterfield is an American nonprofit executive, academic administrator, and government official serving as the president and CEO of the Aspen Institute. Porterfield previously served as the 15th president of Franklin & Marshall College, senior vice president for strategic development and English professor at Georgetown University, and communications director and chief speechwriter for the U.S. Health and Human Services Secretary during the Clinton Administration.

Aspen Meadows is a 40-acre conference center and resort located amongst the Rocky Mountains in Aspen, Colorado. It is owned by the Aspen Institute, operated by Dolce Hotels and Resorts, and is the venue for some of the institute's most notable events, such as the annual Aspen Ideas Festival and Socrates Program seminars. It was designed by Herbert Bayer in the Bauhaus style.