Last updated June 07, 2022
Catholic archdiocese in Tunisia
This article is about the archdiocese established in 1884. For its predecessor, see Archdiocese of Carthage.

The Archdiocese of Tunis is a Latin Church ecclesiastical territory or diocese of the Catholic Church in Tunis, Tunisia. It was founded on 10 November 1884 under the name "Archdiocese of Carthage", with territory corresponding to that of the then French protectorate of Tunisia. On 9 July 1964, it became a territorial prelature under the ecclesiastical title of Prelature of Tunis. It was made a diocese, keeping the name of Tunis, on 31 May 1995, and raised to the rank of archdiocese on 22 May 2010. [1]

The Cathedral of St. Vincent de Paul is the cathedral of the archdiocese of Tunis.

The ancient see of Carthage, which is now a titular see, [2] was much less extensive than the archdiocese of Tunis. The territory of the archdiocese is coterminous with that of Tunisia, and thus corresponds approximately to that of the entire Roman provinces of Africa Proconsularis (Zeugitana) and Byzacena. The ancient diocese was only one of many bishoprics within the former of these Roman provinces.

On the other hand, the archdiocese does not enjoy the influence that the ancient diocese had over a large number of bishoprics in an area, encompassing not only today's Tunisia but also much of Algeria.

In 1684, Pope Urban VIII established an apostolic prefecture at Tunis for Ottoman Tunisia, which Pope Gregory XVI raised to the rank of an apostolic vicariate in 1843. [3]

In 1881, Tunisia became a French protectorate, and in the same year Charles Lavigerie, who was archbishop of Algiers, became apostolic administrator of the vicariate of Tunis. In the following year, Lavigerie became a cardinal. He "saw himself as the reviver of the ancient Christian Church of Africa, the Church of Cyprian of Carthage", [4] and, on 10 November 1884, was successful in his great ambition of having the metropolitan see of Carthage restored, with himself as its first archbishop. [5] In 1053, Pope Leo IX settled a dispute about primacy in the Roman province of Africa between the bishops of Carthage and Gummi by declaring that, after the Bishop of Rome, the first archbishop and chief metropolitan of the whole of Africa is the bishop of Carthage nor can he, for the benefit of any bishop in the whole of Africa, lose the privilege received once for all from the holy Roman and apostolic see, but he will hold it until the end of the world as long as the name of our Lord Jesus Christ is invoked there, whether Carthage lie desolate or whether it some day rise glorious again." [6] In line with this, Pope Leo XIII acknowledged the revived Archdiocese of Carthage as the primatial see of Africa and Lavigerie as primate. [7] [8] [9] (The statement by Auguste Boudinhon that the acknowledgement was made in 1893, the year after Lavigerie's death, [10] if not mistaken, is a reference to some renewed recognition.) From then until 1964, the Annuario Pontificio presented the see of Carthage as "founded in the 3rd century, metropolitan see of Proconsularis or Zeugitana, restored as archbishopric 10 November 1884". [11]

In July 1964, pressure from President Habib Bourguiba's government of the Republic of Tunisia, which was in a position to close down all the Catholic churches in the country, forced the Holy See to abide by a modus vivendi bilateral agreement which regulated its legal status according to the 1959 Constitution of Tunisia. [12] The modus vivendi gave the Catholic Church in Tunisia legal personality and stated that it was legally represented by the prelate nullius of Tunis. [12] : 917  The Holy See chose the prelate nullius but the government could object against the candidate before an appointment. [12] : 920  The modus vivendi banned the Catholic Church from any political activity in Tunisia. [12] : 918  This particular agreement was unofficially described as instead a modus non moriendi ("a way of not dying"). By it, all but five of the country's more than seventy churches were handed over to the state, including what had been the cathedral of the archdiocese, while the state, for its part, promised that the buildings would be put only to use of public interest consonant with their previous function. [13] [14] [15]

Pope Paul VI suppressed the Archdiocese of Carthage and erected the Prelature nullius of Tunis, in his 1964 apostolic constitution Prudens Ecclesiae, to conform to the bilateral agreement. [16] The Archdiocese of Carthage reverted to the status of a titular see. The residential archdiocese's territory became that of the Territorial Prelature of Tunis, established on 9 July 1964. The first archbishop of the titular see, Agostino Casaroli, was appointed on 4 July 1967. The Annuario Pontificio of that period described the titular archiepiscopal see of Carthage as "founded in the 3rd century, metropolitan see of Proconsularis or Zeugitana, restored as an archiepiscopal see on 10 November 1884, titular archbishopric 9 July 1964". [17] The history of the territorial prelature was given as "founded 9 July 1964, previously an archbishopric under the name of Carthage founded 10 November 1884". [18]

What was the cathedral of the archdiocese of Carthage, the Saint Louis Cathedral (Carthage), is owned by the Tunisian state and is used for concerts.

The prelature was elevated to an exempt diocese, directly subject to the Holy See, in 1995. [19] [lower-alpha 1] In 2010, it was promoted to an exempt archdiocese. [21] The summary of the history of the residential archdiocese of Tunis now given in the Annuario Pontificio is: "archbishopric under the name of Carthage 10 November 1884; Prelature of Tunis 9 July 1964; diocese 31 May 1995; archbishopric 22 May 2010." [22] The ancient see of Carthage, on the other hand, being no longer a residential bishopric, is listed by the Catholic Church as a titular see in the same publication as distinct from the modern see of Tunis. As a summary history of the titular see of Carthage it states: "founded in the 3rd century, metropolitan see of Proconsularis or Zeugitana, restored as an archiepiscopal see on 10 November 1884, titular metropolitan see 9 July 1964". [23]

Other priest of this diocese who became bishop

Patrick Coveney is an Irish prelate of the Catholic Church who worked in the diplomatic service of the Holy See from 1966 to 2009. He became an archbishop in 1985 and fulfilled several assignments as Apostolic Nuncio, including stints in Zimbabwe, Ethiopia, New Zealand, and Greece. 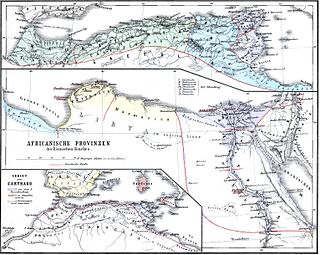 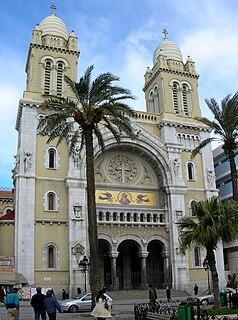 The Cathedral of St. Vincent de Paul is a Roman Catholic church located in Tunis, Tunisia. The cathedral is dedicated to Saint Vincent de Paul, patron saint of charity. It is the episcopal see of the Archdiocese of Tunis and is situated at Place de l'Indépendence in Ville Nouvelle, a crossroads between Avenue Habib Bourguiba and Avenue de France, opposite the French embassy.

The Roman Catholic Diocese of Parañaque is a diocese of the Latin rite of the Roman Catholic Church in Metro Manila, Philippines which encompasses the cities of Parañaque, Las Piñas, and Muntinlupa. Previously belonging to the Archdiocese of Manila, the Ecclesiastical District of Parañaque was declared an independent diocese on December 7, 2002 by Pope John Paul II by virtue of the Papal Bull Ad Efficacius. The district bishop, Most Rev. Jesse Eugenio Mercado, D.D., also one of the auxiliary bishops of Manila, was designated as its first bishop and was formally installed on January 28, 2003. 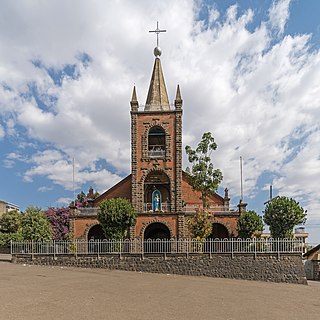 Azura was an ancient civitas and bishopric in Roman North Africa– It remains only as Latin Catholic titular see. 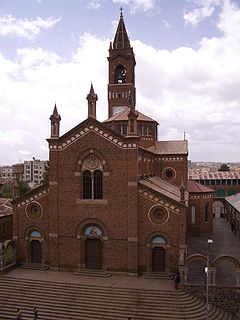 Dura was an Ancient city and bishopric in Roman North Africa, which remains a Latin Catholic titular see.

Paul-Marie-Maurice Perrin was a French prelate of the Catholic Church who worked in Tunisia, including more than a decade as Archbishop of Carthage. He oversaw the dismantling of the Church's presence there with the end of French colonial rule in Tunisia. He then worked in Iraq as both archbishop and diplomat from 1965 to 1970 and ended his career as the Holy See's representative in Ethiopia from 1970 to 1972.