Restiveness marked the late 1960s and the early 1970s, which led to the decision by the Benedictine monks to establish another campus outside Manila. They decided on Alabang in Muntinlupa as the site of the new campus. Construction of school buildings began in 1972 on a nine and a half hectare lot inside the Alabang Hills Village. On July 10, 1972, San Beda College Alabang opened its doors to 78 preschool boys and girls. It began as a basic co-educational school and was originally named the Benedictine Abbey School (BAS). Fr. Roberto de Jesus, OSB, who was the first Rector, supervised the growing years of the new institution. BAS opened its high school department in 1977. [1]

Both elementary and high school departments later gained accreditation from the Philippine Accrediting Association of Schools, Colleges and Universities (PAASCU).

The Fr. Bellarmine Baltasar Gym initially opened in c. 1997. It was renamed in 2016 in honor of Fr. Baltasar, who is still to this day the longest presiding rector-president of the school.

Under the leadership of Fr. Tarcisio H. Narciso, OSB, Rector, the college department initially offered mostly business oriented courses. The department welcomed 208 students and 15 faculty members recruited from other colleges and universities and from the roster of the San Beda University high school and grade school faculty. In the succeeding years, the college opened additional courses that catered to the arts, humanities and other sciences. St. Bede Hall (the college building) was constructed in March 1996 and inaugurated on July 1, 1997 in time for the institution’s silver jubilee.

In 2001, Fr. Aloysius A. Maranan, OSB, Rector and concurrent Dean, renamed the college department the "College of Arts & Sciences." He focused on revitalizing the CAS through extensive operational and academic policies, curriculum adjustments, administrator overhauls and faculty development.

On September 7, 2004, after 32 years since its establishment, the college made the decision to adopt the secondary name of the institution as its official name; San Beda College Alabang. Fr. Anscar Chupungco, OSB, Rector-President led the decision in response to the growing demand of the institute's stakeholders. [3]

Fr. Chupungco led the expansion of the higher education departments by opening the School of Law in 2005. It began as an extension of San Beda University in Manila until the new department became a separate entity in 2009. [4]

With the assumption of Dom Clement Ma. H. Roque, OSB as the eighth Rector-President in 2008 and his re-election in 2010, the school's efforts towards PAASCU accreditation were placed. Construction of new facilities like the St. Maur Building for the School of Law were accomplished at the same time with the upgrading of sports facilities.

In 2013, Rev. Fr. Anselm M. Manalastas, OSB was installed as the ninth rector, which occurred after the passing of its seventh rector-president. On July 2, 2015, SBCA inaugurated its Graduate School with its initial offering of a degree leading to Master in Business Administration. [5]

Responding to the government’s mandate of an expanded basic education program, the school began preparations for the transition to the new curriculum. A task force on the Senior High program was created by Rev. Fr. Anselm M. Manalastas, OSB in 2013. In April 2016, the Board of Trustees approved the establishment of the Senior High School (SHS) Department as a separate unit from the IBED (K-10) department. The move was in line with the strategy to position the SHS as a college preparatory program and align it with the course offerings of the CAS.

Dom Clement Ma. H. Roque, OSB, Rector-President led the ground-breaking of the SHS building, named Our Lady of Montserrat Hall on May 14, 2016 together with the members of the Board of Trustees which opened on January 20, 2018.

In 2019, Fr. Gerardo Ma. A. De Villa, OSB was installed as the eleventh Rector-President of San Beda College Alabang.

The San Beda School of Law in Alabang was established in 2004 and has been declared autonomous from the San Beda Law School in Mendiola, with lawyer Ulpiano P. Sarmiento III as its first dean. Among San Beda Alabang's faculty members are former Philippine senator Rene Saguisag, Rene Sarmiento, a former commissioner of the Philippines' Commission on Elections, and the lawyer brothers Sigfrid and Raymond Fortun. [6] 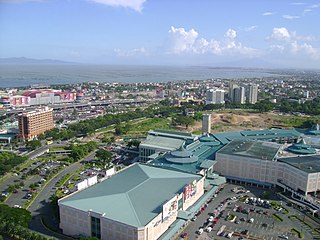 Muntinlupa, officially the City of Muntinlupa, is a 1st class highly urbanized city in the National Capital Region of the Philippines. According to the 2020 census, it has a population of 543,445 people.

The Colegio de San Juan de Letran, also referred to by its acronym CSJL, is a private Catholic coeducational basic and higher education institution owned and run by the friars of the Order of Preachers in Intramuros, Manila, Philippines. It was founded in 1620. Colegio de San Juan de Letran has the distinction of being the oldest college in the Philippines and the oldest secondary institution in Asia. The school has produced Philippine presidents, revolutionary heroes, poets, legislators, members of the clergy, jurists, and it is also one of the only Philippine schools that has produced several Catholic saints who lived and studied on its campus. The school's patron saint is St. John the Baptist. The campus contains two statues, representing the two foremost alumni in the fields of secular and religious service: former Philippine President Manuel L. Quezon and Vietnamese Saint Vicente Liem de la Paz. 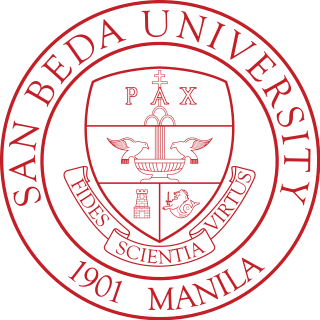 San Beda University is a private Catholic university located in San Miguel, Manila, Philippines. Its main campus which provides tertiary education is situated in Mendiola, Manila. It has a satellite campus that provides elementary and high school education in Taytay, Rizal. The Benedictine College in Alabang, Muntinlupa known as the San Beda College Alabang is an autonomous institution despite being an affiliate of San Beda University.

The National Collegiate Athletic Association – South is an athletic association of colleges and universities mostly coming from NCR and Calabarzon regions of the Philippines. It was established on 1999 by sister schools of the NCAA.

The UST Angelicum College is a private Catholic basic and higher education institution run by the Philippine Dominican Province of the Order of Preachers located in Quezon City, Metro Manila, Philippines. It was founded in May 1972 by the Dominican priest Rev. Fr. Rogelio B. Alarcon, OP who became its first rector. UST Angelicum is an official member of the Dominican Network. It attained Level II Primary Accreditation conducted by PAASCU 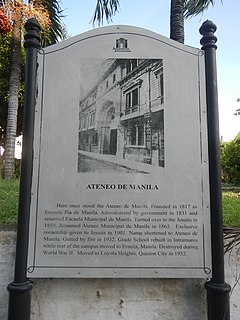 San Beda College of Law is the law school college under the San Beda University, a private, Roman Catholic university run by the Benedictine monks in the Philippines.

Sacred Heart School – Ateneo de Cebu (SHS-AdC), formerly known as Sacred Heart School for Boys (SHS-B), is a private, Catholic, Chinese-Filipino college-preparatory, K-12 school run by the Philippine Province of the Society of Jesus in Mandaue City, Philippines. It was established in 1955 with a curriculum that includes a Chinese language course.

St. Scholastica's Academy Marikina, also referred to by its acronym SSAM or colloquially, St. Scho Marikina is a private Catholic basic education institution for girls run by the Congregation of the Missionary Benedictine Sisters of Tutzing in Marikina, Metro Manila, Philippines. It was founded by the Benedictine Sisters in 1961 in response to the appeal of the alumnae of St. Scholastica's College Manila who were then residing in Quezon City, Marikina, Pasig, San Mateo, and other neighbouring communities, for a Benedictine run Catholic school where their children could also go and experience the St. Scholastica brand of education.

Alabang station is a station on the South Main Line ("Southrail") of the Philippine National Railways. Like all PNR stations, this station is at grade. The station is located on T. Molina Street in Alabang, Muntinlupa, near the Alabang Viaduct of the South Luzon Expressway.

Dom Anscar Chupungco, O.S.B., STD was a Filipino Benedictine monk, who was a noted liturgist, theologian and a mentor to all Filipino liturgists and countless students of the Pontifical Atheneum of St. Anselm in Rome and San Beda University in Manila. He was known for integrating local customs and traditions into the Catholic Mass.

Notre Dame of Midsayap College is a private, Catholic academic institution run by the Missionary Oblates of Mary Immaculate in Midsayap, Cotabato. Established on 13 June 1941 making it as the First Notre Dame School in Asia and in the Philippines, it was the first link in the long chain of Notre Dame Schools in the Philippines that form the Notre Dame Educational Association under the patronage of the Blessed Virgin Mary, the school Patroness and St. Eugene De Mazenod as the school's patron saint.

SBCA may refer to:

The Fr. Bellarmine Baltasar Gymnasium is a gymnasium within San Beda College Alabang in Muntinlupa, Philippines. It has a seating capacity of 1,200 for sporting events and a full house capacity of 5,560.