Seebert Lane Colored School, also known as Pleasant Green School and Hillsboro School, is a historic one-room school for African-American students located at Seebert, Pocahontas County, West Virginia. It was built about 1898, and is a one-story, front-gable frame building. The rectangular plan building measures approximately 24 feet, 4 inches, by 40 feet, 4 inches. The building has a symmetrical facade, small porch supported by two simple, rounded columns, and a cupola. Also on the property is a contributing fuel shed. In 1921, the children of Seebert Lane Colored School were photo documented by Lewis W. Hine as part of his work with the National Child Labor Committee (NCLC). There is no reliable date for when the building stopped operating as a school, though it likely coincided with desegregation in 1954. [2]

One-room schools were commonplace throughout rural portions of various countries, including Prussia, Norway, Sweden, the United States, Canada, Australia, New Zealand, the United Kingdom, Ireland, and Spain. In most rural and small town schools, all of the students met in a single room. There, a single teacher taught academic basics to several grade levels of elementary-age boys and girls. While in many areas one-room schools are no longer used, it is not uncommon for them to remain in developing nations and rural or remote areas. Examples include remote parts of the American West, the Falklands, and the Shetland Islands.

Pocahontas County is a county located in the U.S. state of West Virginia. As of the 2010 census, the population was 8,719. Its county seat is Marlinton. The county was established in 1821. It is named after the daughter of the Powhatan Native American chief from Jamestown, Virginia. She married an English settler and their mixed-race children became ancestors of many of the First Families of Virginia.

It was listed on the National Register of Historic Places in 2012. [1]

Watoga State Park is the largest of West Virginia's state parks, covering slightly over 10,100 acres (41 km2). It is located near Seebert in Pocahontas County, West Virginia.

Wheeling station is a U.S. historic train station located at Wheeling, Ohio County, West Virginia. It was built in 1907-1908, and is a four-story, rectangular brick and limestone building in the Beaux-Arts-style. It measures 250 feet long by 89 feet, 6 inches, deep. It features mansard roofs, built of concrete and covered with Spanish tile painted pink. Passenger service ceased in 1961. The building was remodeled in 1976 to house the West Virginia Northern Community College.

This is a list of the National Register of Historic Places listings in Cabell County, West Virginia.

This is a list of the National Register of Historic Places listings in Winchester, Virginia.

West Virginia Colored Children's Home, also known as the West Virginia Home for Aged and Infirm Colored Men and Women and University Heights Apartments, was a historic school, orphanage, and sanatorium building located near Huntington, Cabell County, West Virginia. It was built in 1922-1923, and was a three-story red brick building in the Classical Revival style. It was founded as the West Virginia Normal and Industrial School for Colored Children in Bluefield, West Virginia. This facility was the last of a series of buildings that were constructed to hold the state's first social institution exclusively serving the needs of African American residents. The West Virginia Colored Children's Home was closed in 1956 and the building was used as a rest home. The property transferred to Marshall University in 1961 and later it was converted to apartments. The building was demolished on May 5, 2011. The location is now the home of Huntington East Middle School. 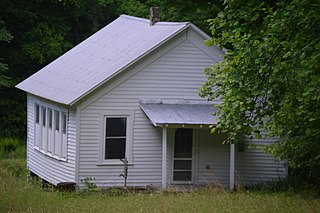 Upper Glady School is a historic one-room school building located near Crawford, Lewis County, West Virginia. It was built about 1900, and is a frame building measuring 28 feet by 24 feet and painted white. Also on the property is a coal house used to store coal for fuel. The school operated until 1965.

Weston Colored School, also known as the Central West Virginia Genealogical & Historical Library and Museum and Frontier School, is a historic one-room school building located at Weston, Lewis County, West Virginia. It was built in 1882, and is a single-story rubbed red brick building on a fieldstone foundation. It originally measured 22 feet by 28 feet, then enlarged in 1928 by 12 feet, 6 inches. It was used as an educational facility for the community's African-American youth until desegregation in 1954. It was subsequently used for storage, then an agricultural classroom for the Lewis County High School, and as a shop for mentally disabled students. It afterwards was used by the Central West Virginia Genealogical & Historical Library and Museum. 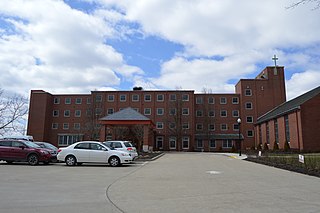 Mount Saint Joseph, also known as Holloway Estate, is a historic house and motherhouse located near Wheeling, Ohio County, West Virginia. The Holloway House was built in 1854, with two additions dated to the 1920s. The original farmhouse is two stories and measures 35 feet by 45 feet. The 1920s additions include one with a garage and apartment above, and an "L"-shaped addition which became the main living quarters. Located on the property is an immense, three winged structure built as the motherhouse for the Sisters of St. Joseph. It is a Modern building built in 1954-1956. Also on the property are a contributing cold storage building, spring house, and bathhouse.

Riverside School is a historic school building located at Elkins, Randolph County, West Virginia. It was built between 1902 and 1905, as a one-story, rectangular red brick structure, measuring 56 feet, 6 inches, by 34 feet. A second story was added in 1928, when it became a four-year high school. It has a hipped roof and a sandstone foundation. It was originally built as a school for African American students, and remained so until the 1954 desegregation order and the school was closed.

Virginia and Truckee Railway Motor Car 22, also called McKeen Motor Car 70, is a gasoline-powered railcar at the Nevada State Railroad Museum in Carson City in the U.S. state of Nevada. It was built for the Virginia and Truckee Railroad in 1910 by the McKeen Motor Car Company. Motor Car 22 was operated by the Virginia and Truckee until 1945, when it was sold off and became a diner until 1955. It eventually became the office and storage space for a plumbing business before it was donated to the Nevada State Railroad Museum in 1995. After a thorough study, the Museum undertook a restoration of the McKeen car in 1997. The restored motor car was unveiled in 2010, a century after it was originally delivered to the Virginia and Truckee. Motor Car 22 was listed on the National Register of Historic Places in 2005, and designated a National Historic Landmark in 2012. It is one of a few surviving McKeen railcars, and the only one that is operational.

The Hollow is an historic property and dwelling located near Markham, Fauquier County, Virginia, U.S. A part of the John Marshall's Leeds Manor Rural Historic District, it was the boyhood home of Chief Justice John Marshall, and includes the second-oldest dated home in the county. Both the property and the district are listed in the Virginia Landmarks Register (2003) and National Register of Historic Places (2004). 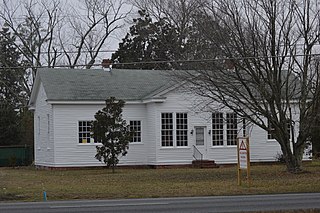 Woodville School is a historic Rosenwald school building located at Ordinary, Gloucester County, Virginia. It was built in 1923, and is a high one-story, five bay, symmetrical frame structure. It measures 63 feet, 6 inches, by 28 feet, 6 inches, and sheathed in white painted clapboard. It was converted to residential use after 1942. Also on the property are a contributing guesthouse or additional school building and a small shed.

Fork Church is a historic Episcopal church located near Ashland, Hanover County, Virginia. It was built in 1736, and is a one-story, gable roofed brick building. It measures approximately 34 feet by 74 feet and has walls 22 inches thick. The front facade features a small pedimented porch supported on square brick columns, both probably added in the early-19th century. Also on the property is a contributing church cemetery. Among the more-notable persons who often attended services at Fork Church were Patrick Henry, Dolly Madison, and the novelist Thomas Nelson Page. From 1893 to 1903, Fork Church's rector was the Reverend S. S. Hepburn, grandfather of actress Katharine Hepburn.

Crab Run Lane Truss Bridge is a historic Truss bridge located on State Route 645 in McDowell, Highland County, Virginia. It was built in 1896, by the West Virginia Bridge Works, Wheeling, West Virginia. It is a single-span, four-panel pony truss measuring 39 feet long, 12 feet, 6 inches wide, and 5 feet, 2 inches tall. Much of the bridge is constructed of bent and straight steel railroad rails. The bridge was taken out of service for vehicular traffic in 1994; it is now used to carry pedestrian and bicycle traffic.

Quarters 17, also known as Building 17, Lee's Quarters, and the Tuileries, is a historic officer's quarters located at Fort Monroe, Hampton, Virginia. It was built in 1823, and is a two-story, six-bay, brick building with a rear ell in the Federal style. It has a three-story full façade front Tuscan order porch on both the first and second level. The building was renovated and the porch was added in 1907. The main section measures 65 feet wide, 37 feet, 9 inches deep, with an 18 by 23 feet rear ell. The original design was for housing eight junior officers, with later alterations to accommodate four families. It is one of two identical four family brick officer's quarters known as the Tuileries. Robert E. Lee moved to Fort Monroe in 1831 with his young bride into two rooms that formed a wing of the west side of Quarters 17. He resided there until November 1834.

Pleasant Green Methodist Episcopal Church is a historic African-American Methodist Episcopal church located at Seebert, Pocahontas County, West Virginia. It was built in 1888, and is a one-story, front-gable building with a standing seam metal roof, and clapboard siding. The rectangular plan building measures approximately 26 feet, 8 inches, by 34 feet, 3 inches and has Gothic Revival style details. The building features a central entrance bell tower. Also on the property are the contributing parsonage and cemetery.