Sherburn Hospital (also known as Christ's Hospital in Sherburn) is a medieval hospital located in the hamlet of Sherburn House to the southeast of Durham, England.

The hospital was founded in 1181 by Hugh de Puiset (Bishop Pudsey), to care for 65 lepers and dedicated to "our Lord, to the Blessed Virgin, to St. Lazarus and his sisters, Mary and Martha". [1] Its statutes were amended at the request of Bishops Richard Kellaw and Thomas Langley. [1]

The hospital was endowed with a range of lands, including Sherburn, Garmondsway Moor, Ebchester, Whitton, Raceby and Sheraton. [1]

Sherburn Hospital survived the Dissolution of the Monasteries and the associated closures of many hospitals (including nearby Kepier) and a new constitution was introduced by Act of Parliament in 1585 for the establishment of "The Master and Brethren of Christ's Hospital in Sherborne near Durham". [1]

George Stanley Faber became master of the hospital in 1832 and devoted much of his income to improving it. He died there in 1854 and was buried in its chapel. [2]

The hospital became very wealthy due to coal mining on its estates. As a result, a new regime was introduced in 1857 by the charity commissioners meaning: [3]

The chapel and the gatehouse are grade II* listed buildings. [4] [5]

The hospital, as Sherburn House Charity, now provides residential care and sheltered housing for residents and former residents of the ancient diocese of Durham, and is a significant grant making body to individuals and local community groups, in line with the charity's objects. [6]

Martha of Bethany is a biblical figure described in the Gospels of Luke and John. Together with her siblings Lazarus and Mary of Bethany, she is described as living in the village of Bethany near Jerusalem. She was witness to Jesus resurrecting her brother, Lazarus.

An almshouse is charitable housing provided to people in a particular community. They are often targeted at the poor of a locality, at those from certain forms of previous employment, or their widows, and at elderly people who can no longer pay rent, and are generally maintained by a charity or the trustees of a bequest. Almshouses were originally formed as extensions of the church system and were later adapted by local officials and authorities.

George Stanley Faber was an Anglican theologian and prolific author.

The Great Hospital is a medieval hospital that has been serving the people of Norwich, Norfolk, England, since the 13th century. It is situated on a 7-acre (2.8 ha) site in a bend of the River Wensum to the north-east of Norwich Cathedral. Bishop Walter de Suffield founded Saint Giles's Hospital, as the hospital was originally known, in 1249. What make the hospital notable today are its history of continuous care, the range of existing medieval buildings on the hospital grounds, and the extensive archives that record the hospital's long history. 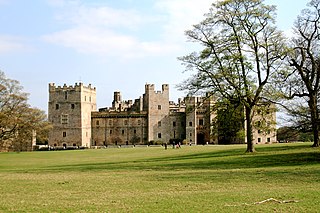 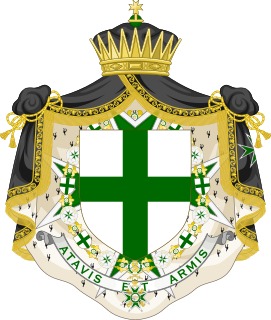 The Lord Leycester Hospital is one of the best preserved examples of medieval courtyard architecture in England and is a charity supporting ex-servicemen. It is located in Warwick, England, next to the West Gate, on High Street. It is a Grade I listed building. The Hospital is a prominent and internationally famous feature of Warwick. For almost 900 years buildings have been erected and civic activity has taken place on the site, starting with the chapel built in 1126. The site was donated by the 12th Earl of Warwick in the 14th century to the United Guild of the Holy Trinity and St George. The Guild Hall, Great Hall and Master's House were constructed in the late 15th century. Over the centuries, the ancient buildings and 500 year old gardens have been admired by many famous visitors such as Charles Dickens and Oscar Wilde, by Kings and Queens, such as King George V and the Queen Mother and ordinary travellers from around the world.

Kepier Hospital was a medieval hospital at Kepier, Durham, England.

Lazarus of Bethany, also known as Saint Lazarus or Lazarus of the Four Days, venerated in the Eastern Orthodox Church as (Righteous) Lazarus the Four Days Dead after he rose again, is the subject of a prominent sign of Jesus in the Gospel of John, in which Jesus restores him to life four days after his death. The Eastern Orthodox and Roman Catholic traditions offer varying accounts of the later events of his life.

The Hospital of St Cross and Almshouse of Noble Poverty is a medieval almshouse in Winchester, Hampshire, England. It has been described as "England's oldest and most perfect almshouse". Most of the buildings and grounds are open to the public at certain times. It is a Grade I listed building. 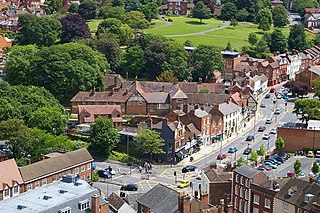 The Commandery is a historic building open to visitors and located in the city of Worcester, England. It opened as a museum in 1977 and was for a while the only museum in England dedicated solely to the Civil Wars. The Commandery ceased to be a Civil War museum when it reopened to the public in May 2007, having undergone a year and a half of refurbishments and reinterpretation jointly funded by the Heritage Lottery Fund and Worcester City Council, who own the building. It is a Grade I listed building.

The Hospital of St John Baptist without the Barrs is a sheltered housing complex with adjacent chapel in the city of Lichfield, Staffordshire, England. It is a Grade I listed building.

Locko Preceptory was a Preceptory of the Military and Hospitaller Order of Saint Lazarus of Jerusalem, situated just over a mile north of Spondon, Derbyshire; the site is today part of the Locko Park estate. It is the only recorded Lazarite Preceptory in England.

St. Bartholomew's Hospital, Rochester was founded in 1078 for the care of the poor and lepers. It survived as a charity until taken over with the founding of the National Health Service. The hospital closed permanently in September 2016.

God's House Hospital was a refuge for poor travellers in Southampton, England. Much of the complex has now been destroyed, with only two buildings remaining: the gatehouse, God's House Tower, a grade I listed scheduled ancient monument, and a chapel, St. Julien's Church, a grade I listed building.

The Hospital Chapel of St Mary the Virgin and St Thomas of Canterbury, Ilford, also known as Ilford Hospital Chapel is on Ilford Hill in Ilford. It is an ancient charitable foundation dating from about 1140, and is the oldest building in the London Borough of Redbridge. Since 1954 it has been protected as a Grade II* listed building under UK legislation.