The Small Device C Compiler (SDCC) is a free-software, partially retargetable [1] C compiler for 8-bit microcontrollers. It is distributed under the GNU General Public License. The package also contains a linker, assembler, simulator and debugger. As of March 2007, SDCC is the only open-source C compiler for Intel 8051-compatible microcontrollers. [2] [3] [4] [ citation needed ] In 2011 the compiler was downloaded on average more than 200 times per day. [5]

The following include binary compatible derivatives...

Work is in progress on:

SDCC suite is a collection of several components derived from different sources with different FOSS licenses.

A microcontroller is a small computer on a single metal-oxide-semiconductor (MOS) integrated circuit chip. In modern terminology, it is similar to, but less sophisticated than, a system on a chip (SoC); a SoC may include a microcontroller as one of its components. A microcontroller contains one or more CPUs along with memory and programmable input/output peripherals. Program memory in the form of ferroelectric RAM, NOR flash or OTP ROM is also often included on chip, as well as a small amount of RAM. Microcontrollers are designed for embedded applications, in contrast to the microprocessors used in personal computers or other general purpose applications consisting of various discrete chips. 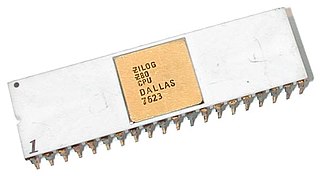 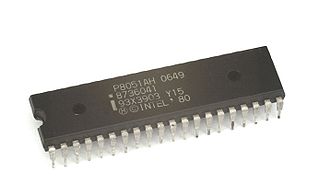 The Intel MCS-51 is a single chip microcontroller (MCU) series developed by Intel in 1980 for use in embedded systems. The architect of the instruction set of the Intel MCS-51 was John H. Wharton. Intel's original versions were popular in the 1980s and early 1990s and enhanced binary compatible derivatives remain popular today. It is an example of a complex instruction set computer, and has separate memory spaces for program instructions and data.

Zilog, Inc. is an American manufacturer of 8-bit and 16-bit microcontrollers. Its most famous product is the Z80 series of 8-bit microprocessors that were compatible with the Intel 8080 but significantly cheaper. The Z80 was widely used during the 1980s in many popular home computers such as the TRS-80 and the ZX Spectrum, as well as arcade games such as Pac-Man. The company also made 16- and 32-bit processors, but these did not see widespread use. From the 1990s, the company focused primarily on the microcontroller market.

Z88DK is a Small-C-derived cross compiler for a long list of Z80 based computers. The name derives from the fact that it was originally developed to target the Cambridge Z88. Z88DK is much developed from Small-C and it accepts many features of ANSI C with the notable exception of multi-dimensional arrays and prototyped function pointers. Later version also supports SDCC as compiler. 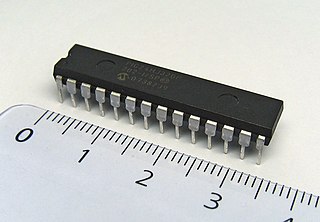 PIC is a family of microcontrollers made by Microchip Technology, derived from the PIC1650 originally developed by General Instrument's Microelectronics Division. The name PIC initially referred to Peripheral Interface Controller, and is currently expanded as Programmable Intelligent Computer. The first parts of the family were available in 1976; by 2013 the company had shipped more than twelve billion individual parts, used in a wide variety of embedded systems.

The PL/M programming language (an acronym of Programming Language for Microcomputers) is a high-level language conceived and developed by Gary Kildall in 1973 for Hank Smith at Intel for its microprocessors.

The Interactive Disassembler (IDA) is a disassembler for computer software which generates assembly language source code from machine-executable code. It supports a variety of executable formats for different processors and operating systems. It also can be used as a debugger for Windows PE, Mac OS X Mach-O, and Linux ELF executable. A decompiler plug-in for programs compiled with a C/C++ compiler is available at extra cost. The latest full version of IDA Pro is commercial; while an earlier and less capable version is available for download free of charge.

In software engineering, retargeting is an attribute of software development tools that have been specifically designed to generate code for more than one computing platform.

This is a list of assemblers: computer programs that translate assembly language source code into binary programs. Some assemblers are components of a compiler system for a high level language and may have limited or no usable functionality outside of the compiler system. Some assemblers are hosted on the target processor and operating system, while other assemblers (cross-assemblers) may run under an unrelated operating system or processor. For example, assemblers for embedded systems are not usually hosted on the target system since it would not have the storage and terminal I/O to permit entry of a program from a keyboard. An assembler may have a single target processor or may have options to support multiple processor types. Very simple assemblers may lack features, such as macros, present in more powerful versions.

MPLAB is a proprietary freeware integrated development environment for the development of embedded applications on PIC and dsPIC microcontrollers, and is developed by Microchip Technology.

The DS80C390 is a microcontroller whose architecture is derived from that of the Intel 8051 processor series, introduced by Dallas Semiconductor. It features an increased code memory address space of twenty-two bits, as opposed to the sixteen bit space of the original 8051 processor. It also includes two Controller Area Network (CAN) controllers and a 32-bit integer coprocessor. The open-source Small Device C Compiler (SDCC) supports the processor. It was used in the initial version of the Tiny Internet Interface (TINI) processor module where it was superseded by the DS80C400, a processor that also incorporates an Ethernet port.

The Infineon XC800 family is an 8-bit microcontroller family, first introduced in 2005, with a dual cycle optimized 8051 "E-Warp" core. The XC800 family is divided into two categories, the A-Family for Automotive and the I-Family for Industrial and multi-market applications.