The snowplough turn,snowplow turn, or wedge turn [1] is a downhill skiing braking and turning technique. It is the first turn taught to beginners, [2] but still is useful to advanced skiers on steep slopes.

The front ski tips of the skis are together and the tails wide apart, with the knees rolled inwards slightly. By applying pressure against the snow with the inside edges of the skis speed is reduced, making turning in such a configuration and stopping completely possible. To turn, weight is shifted from the downhill, outside-of-the-turn ski to the uphill, inside-of-the-turn ski. As the turn is completed, the old uphill, inside ski then becomes the new downhill, outside ski. [3] [4] [5] Successful completion of the technique in both directions leads to linked turns. [6]

In ski instruction, the snowplough is a primary building block of skiing proficiency. Under the Arlberg technique for teaching skiing, beginners start with the snowplough then proceed to Stem Christie and then the parallel turn as their skills improve. [7] It may be thought of as the foundation for controlling individual skis. [8] A ski coach can analyze the underlying abilities of expert skiers by watching them do a snowplow. [9] Proficient skiers may apply the technique with a narrower angle between the skis as a "wedge turn". [10]

In ski mountaineering, the snowplough is recognized as an important way to come to a complete stop on steep slopes. [11] On steep slopes, a wedge turn can also provide a safe way to transition through the fall-line. [12] 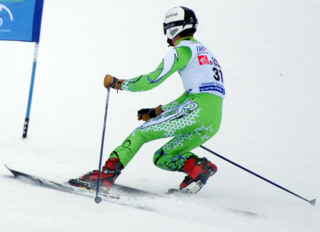 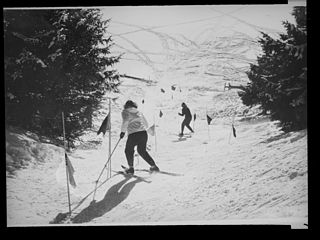 The stem christie or "wedge christie" is a technique used in skiing for turning. The turn comprises three steps: 1. Forming a wedge by rotating the tail of one ski outwards at an angle to the direction of movement, which initiates a change in direction opposite to the stemmed ski. 2. Bringing the other ski parallel to the wedged ski. 3. Completing the turn with both skis parallel as they carve an arcing turn sliding sideways together.

The parallel turn in alpine skiing is a method for turning which rolls the ski onto one edge, allowing it to bend into an arc. Thus bent, the ski follows the turn without sliding. It contrasts with earlier techniques such as the stem Christie, which slides the ski outward from the body ("stemming") to generate sideways force. Parallel turns generate much less friction and are more efficient both in maintaining speed and minimizing skier effort. 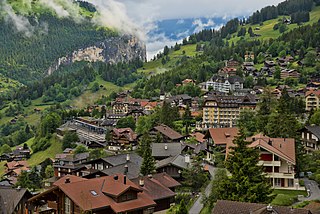 Wengen is a mountain village in the Bernese Oberland of central Switzerland. Located in the canton of Bern at an elevation of 1,274 m (4,180 ft) above sea level, it is part of the Jungfrauregion and has approximately 1,300 year-round residents, which swells to 5,000 during summer and to 10,000 in the winter. Wengen hosts the classic Lauberhorn ski races of the FIS Alpine Ski World Cup in January.

The Arlberg technique is a progressive system that takes the skier from the snowplough turn to the parallel christie through measured stages of improvement. The system, or slightly modified versions, remains in widespread use to this day. Modern ski equipment is also capable of a more efficient turning style known as carving that uses entirely different techniques and movements. Some ski schools have started moving students directly from the snowplough to carving as early as possible, avoiding learning stemming habits that may be difficult to un-learn. 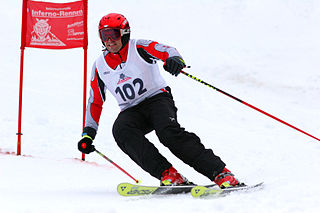 A carved turn is a skiing term for the technique of turning by shifting the ski onto to its edges. When edged, the sidecut geometry causes the ski to bend into an arc, and the ski naturally follows this arc shape to produce a turning motion. The carve is efficient in allowing the skier to maintain speed because, unlike the older stem Christie and parallel turns, the skis don't create drag by sliding sideways.

Patrick Vallençant was a French alpinist/skier and pioneer in ski mountaineering. 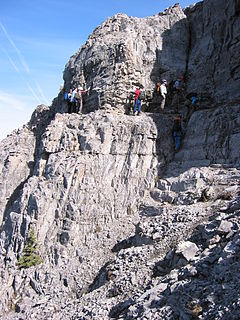 A traverse is a lateral move or route when climbing or descending ; going mainly sideways rather than up or down. The general sense of 'a Traverse' is to cross, or cut across and in general mountaineering, a road or path traveled traverses the steep gradient of the face. In civil engineering, road bed cuttings dug by construction operations creating an navigable incline into a hillside traverse the slope, also cut across the gradient as does the skier, climber, or builder. 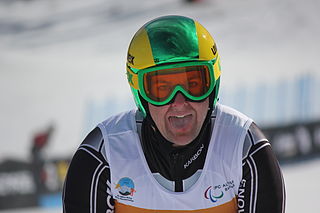 LW1 is a para-Alpine standing skiing classification for people with severe lower extreme disabilities in both extremities. It includes both skiers with amputations and cerebral palsy. International classification is done through International Paralympic Committee Alpine Skiing, and national classification through local national sport federations. LW1 classified skiers use outriggers, and two skis or one ski with a prosthesis. Other equipment is used during training such as ski-tips, ski-bras, and short skis.

LW3 is a para-Alpine and para-Nordic standing skiing sport class defined by the International Paralympic Committee (IPC) for skiers with a disability affecting both legs, with double below knee amputation or a combined strength total for both legs of 60, with 80 as the baseline for people without disabilities. For international skiing competitions, classification is done through IPC Alpine Skiing or IPC Nordic Skiing. The classification has two subclasses for para-Alpine skiing: LW3.1 which is for people with double below the knee amputations or similar disabilities, and LW3.2 which is for people with cerebral palsy that involves moderate athetoid, moderate ataxic impairment or slight diplegic involvement. 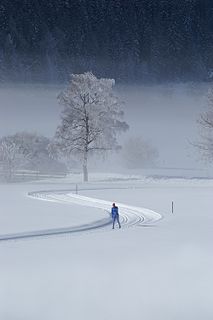