Soni Malaj was born on 23 October 1981 into an Albanian family in the city of Tropojë, then part of the People's Republic of Albania, present Albania. [1] [2] She has participated in competitions like "Top Fest" [3] (2006), and she placed second in Kënga Magjike with Flori Mumajesi, with the song "Fluturimi 3470". After Serbian singer Marija Šerifović won Eurovision Song Contest 2007, there was speculation that her winning song Molitva was actually plagiarism of Soni Malaj's song Ndarja. [4] Soni Malaj also won top fest 11.

In 2018, Malaj unsuccessfully attempted to represent Albania in the Eurovision Song Contest 2019, after finishing fifth at the 57th edition of Festivali i Këngës with the song "Më e fortë". [5] [6] In March 2021, Televizioni Klan (TV Klan) announced her as one of the contestants selected to compete at the 22nd edition of Kënga Magjike. [7]

Albania participated in the Eurovision Song Contest 2006 in Athens, Greece, with the song "Zjarr e ftohtë" performed by Luiz Ejlli. Its selected entry was chosen through the national selection competition Festivali i Këngës organised by Radio Televizioni Shqiptar (RTSH) in December 2005. To this point, the nation had participated in the Eurovision Song Contest two times since its first entry in 2004. Due to the non-top 11 result in the previous contest, Albania was drawn to compete in the semi-final of the contest, which took place on 18 May 2006. Performing as number six, the nation was not announced among the top 10 entries of the semi-final and therefore failed to qualify for the grand final, marking Albania's first non-qualification in the contest. 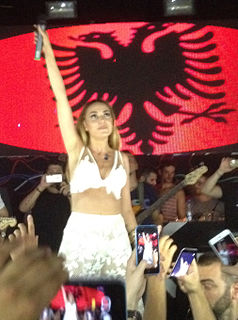 Elvana Gjata, also known mononymously as Elvana, is an Albanian singer, songwriter, actress, composer and entrepreneur. Born and raised in Tirana, she has been referred to as the "Diva of Albanian music" and is noted for her versatility in music, performance and presentation. She rose to recognition in the Albanian-speaking Balkans following the release of her two albums, Mamës (2007) and Afër dhe larg (2011), both of which were influenced by r&b and dance-pop. Her success was further solidified with the later released extended play 3 (2018), which incorporated more pop-rock and folk elements. Gjata has received numerous awards and accolades, including two Balkan Music Award, a Festivali i Këngës Award, four Kënga Magjike Awards and a Top Fest Award.

Florjan Mumajesi, known professionally as Flori, is an Albanian recording artist, composer, producer, vocalist, director, singer and songwriter. He is particularly recognised for his work as a composer during which he established himself as one of the most successful composers in Albania and the Albanian-speaking world. Born and raised in Tirana, Mumajesi began his career at an early age and rose to significant recognition after his participations in Kënga Magjike and his eventual victory in 2018. He resumed his earlier career in 2011 with his debut studio album "Detaj" which incorporated musical elements from all of his previous records.

Elhaida Dani is an Italian-Albanian singer, songwriter, composer and actress. Born and raised in Shkodër, she performed in diverse singing competitions and started to play piano as a child. She rose to significant recognition in the Albanian-speaking world after her victories at Star Academy Albania, Top Fest and Festivali i Këngës. In Italy, she is also prominent for being the winner of the first series of The Voice of Italy. Dani represented Albania in the Eurovision Song Contest 2015 with the song "I'm Alive", after she won the 53rd edition of Festivali i Këngës. She participated in Kënga Magjike for the first time in 2017 with the song "E Ngrirë" whereas she finished second. She rose again great popularity in Italy as well as in France upon her international acting debut in the world renowned musical of Notre-Dame de Paris.

Arilena Ara, also known mononymously as Arilena, is an Albanian singer and songwriter. Born and raised in Shkodër, Arilena achieved national recognition in the Albanian-speaking world when she won the second season of the X Factor Albania in 2013. Her success continued with the participation in the 18th edition of Kënga Magjike finishing in the third place with the song "Nëntori". Due to the success, she rose to recognition in Romania, Russia and Eastern Europe, and peaked at number-one in the Romanian Airplay chart. In 2019, after winning the 58th edition of Festivali i Këngës, she was scheduled to represent Albania in the Eurovision Song Contest 2020 before the contest's cancellation.

Eneda Tarifa is an Albanian singer, actress and television host. She represented Albania in the Eurovision Song Contest 2016, after winning the 54th edition of Festivali i Këngës.

Albania participated in the Eurovision Song Contest 2017 in Kyiv, Ukraine, with the song "World" performed by Lindita Halimi. Its selected entry was chosen through the national selection competition Festivali i Këngës organised by Radio Televizioni Shqiptar (RTSH) in December 2016. To this point, the nation had participated in the Eurovision Song Contest 13 times since its first entry in 2004. Prior to the contest, the song was promoted by a music video and live performances in Israel, the Netherlands and Spain. Albania was drawn to compete in the first semi-final of the Eurovision Song Contest, which took place on 9 May 2017. Performing as number fourth, the nation was not announced among the top 10 entries of the first semi-final and therefore failed to qualify for the grand final, marking Albania's seventh non-qualification in the contest.

"Plas" is a song by Albanian singer and songwriter Flori Mumajesi released as a single on 2 December 2018 by Threedots. The song participated in the 20th edition of Kënga Magjike.

Lindon Berisha, also known mononymously as Lindon, is an Albanian singer and songwriter from North Macedonia.

Anxhela Peristeri, also known mononymously as Anxhela, is an Albanian singer, songwriter and model. Peristeri emerged as the winner of the 19th edition of Kënga Magjike in 2017. After winning the 59th edition of Festivali i Këngës, she was announced as the Albania's representative for the Eurovision Song Contest 2021. 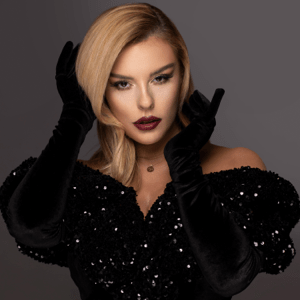 "Karma" is a song by Albanian singer Anxhela Peristeri released as a single on 9 March 2021 by Radio Televizioni Shqiptar (RTSH) and Universal. The song was written by Olti Curri, composed by Kledi Bahiti and produced by the latter alongside Dimitris Kontopoulos. Musically, "Karma" is an Balkan-inspired pop ballad incorporating modern and traditional Albanian elements in its instrumentation. The Albanian-language song lyrically finds inspiration in the principle of karma and portrays a inner turmoil of a woman who blames herself for her world falling apart.

The Kënga Magjike 2021 is scheduled to be the 22nd edition of the annual Albanian music competition Kënga Magjike. It will be organised by Televizioni Klan and will consist of two semi-finals on 26 and 27 May and the final on 29 May 2021.

Sardi Strugaj is an Albanian singer and songwriter. He is known for his participation in Kënga Magjike 2011 alongside with the group Cyberhand. In 2012 he participated in the second season of the Albanian version of X Factor. In October 2020, the Albanian Broadcaster Radio Televizioni Shqiptar (RTSH), announced him as one of the contestants selected to compete in the 59th edition of Festivali i Këngës with the song "Kam me t'ba me kajt", where he finished second.