Steven Ray Tickle, usually referred to as simply "Tickle", is an American television personality, known for his role in Discovery Channel docudramas Moonshiners and Tickle . Tickle lives in rural Pittsylvania County, Virginia, and is shown as working in the town of Gretna.

In 2013, he was reported to be a union carpenter and to have "lived in the Washington area for two years recently as a top carpenter while building the popular Clyde's Restaurant near the Verizon Center downtown." [1]

In 2013, Tickle was also reported to be considering running against U.S. Representative Robert Hurt in Virginia's 5th congressional district as an independent. [1] In addition to his self-proclaimed candidacy for president in 2012, Tickle announced his intention to run for Congress and used an opportunity, in the form of an October 2013 interview with Washington Secrets to call the Affordable Care Act "crap". [1] He said he believes in having a system in which Americans have access to healthcare, but not in allowing federal officials to opt out of it. [1]

He was arrested for public intoxication in March 2013. [2]

Recently, Tickle was driving on a suspended license and had a car accident. The judge decided to throw him in jail for the remainder of his 18 months of probation yet to completed.

Jimmy Smits is an American actor best known for playing attorney Victor Sifuentes on the 1980s legal drama L.A. Law, NYPD Detective Bobby Simone on the 1990s police drama NYPD Blue and Matt Santos on the political drama The West Wing. He also appeared as Bail Organa in the Star Wars prequel trilogy, and as ADA Miguel Prado in Dexter. From 2012 to 2014, he joined the main cast of Sons of Anarchy as Nero Padilla. Smits also portrayed Elijah Strait in the NBC drama series Bluff City Law.

Richard Allen Davis is an American convicted murderer, whose criminal record fueled support for passage of California's "three-strikes law" for repeat offenders. He is currently on death row in Adjustment Center at San Quentin State Prison, California. He was convicted in 1996 of first-degree murder and four special circumstances of 12-year-old Polly Klaas. Davis abducted Klaas on October 1, 1993, from her home in Petaluma, California.

Marcus Deon Vick is a former American football quarterback and wide receiver. Vick played high school football at Newport News Public Schools, and accepted a football scholarship to Virginia Tech, playing quarterback, however he was suspended for the entire 2004 season due to numerous criminal convictions. Vick then declared himself eligible for the 2006 NFL Draft, but went undrafted. He was later signed by the Miami Dolphins as an undrafted free agent but was released on May 1, 2007.

Phill Lewis is an American actor, comedian and director, known for his role as Mr. Moseby on the Disney Channel series The Suite Life of Zack & Cody and its spin-off, The Suite Life on Deck. Lewis has also appeared in series such as Lizzie McGuire, Friends, The Wayans Bros, Scrubs and How I Met Your Mother.

Terry "Tank" Johnson is a former American professional football defensive tackle. He was drafted by the Chicago Bears in the second round of the 2004 NFL Draft. He played college football at Washington. 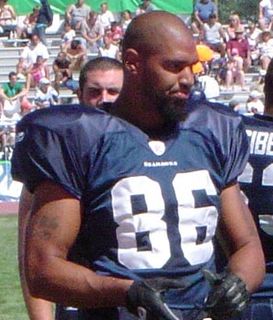 Carl Webb is an Australian former professional rugby league footballer who played as a prop, second-row and lock in the 2000s and 2010s. 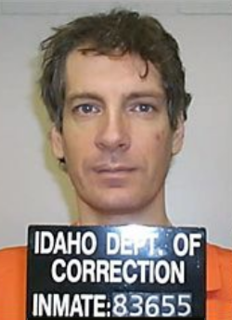 Joseph Edward Duncan III is an American convicted serial killer and child molester who is on death row in federal prison in conjunction with the 2005 kidnappings and murders of members of the Groene family of Coeur d'Alene, Idaho. He is also serving 11 consecutive sentences of life without parole in conjunction with the same crimes as well as the 1997 murder of Anthony Martinez of Beaumont, California. Additionally, Duncan has confessed to — but has not been charged with — the 1996 murder of two girls in Seattle. At the time of the attack on the Groene family, Duncan was on the run from a child molestation charge in Minnesota. He spotted Shasta and Dylan Groene playing outside as he drove past their house on Interstate 90.

J. Herbert Burke was a Republican U.S. Representative from Florida who served from 1967 to 1979.

On April 10, 2007, the National Football League (NFL) introduced a new conduct policy to help control on and off-field behavior by its players and preserve the league's public image. The policy, introduced by NFL commissioner Roger Goodell, implements a tougher, new personal-conduct policy, and under conditions of the previous policy handed down two of the harshest suspensions in NFL history for off-field misdeeds. Each player that has been suspended must reapply for reinstatement. The policy only applies to the player's personal lives and image in the public spotlight. The NFL conducts separate investigations for drug and alcohol abuse and performance enhancement.

Joshua Aaron Price-Brent is a former American football defensive tackle who played for the Dallas Cowboys of the National Football League (NFL). He played college football at the University of Illinois.

Moonshiners is an American docudrama television series on the Discovery Channel produced by Magilla Entertainment that dramatizes the life of people who produce (illegal) moonshine in the Appalachian Mountains of Kentucky, North Carolina, South Carolina, Tennessee, and Virginia. The series dramatizes their liquor production efforts, law-evading techniques and life. There have been claims by local officials that the show is not what it portrays to be. Virginia authorities have stated that no illegal liquor is actually being produced by the people depicted in the show. The Virginia Department of Alcoholic Beverage Control (ABC) said in March 2012 that, "If illegal activity was actually taking place, the Virginia ABC Bureau of Law Enforcement would have taken action." They also said that they had requested for the producers to add a disclaimer to clarify that the show was only a dramatization, "but the request was overlooked", and the show's producers, Magilla Entertainment, have stated their documentary content is real.

The Frederick City Police Department (FPD) is a law enforcement organization that provides police services to the city of Frederick, Maryland, the second-largest city in that state. The department is organized into several divisions, and is responsible for policing more than 68,000 people in a land area of 22.9 square miles. FPD is headed by Edward Hargis, who was appointed Chief of Police in July 2015, replacing outgoing Chief Thomas Ledwell who resigned in September 2014.

Ethan Anthony Couch is an American who at age 16 killed four people while driving under the influence of alcohol and drugs on June 15, 2013, in Burleson, Texas. He was intoxicated, driving on a restricted license and speeding in a residential area when he lost control, colliding with a group of people assisting another driver with a disabled SUV. Four people were killed in the collision and a total of nine people were injured. Two passengers in Couch's truck suffered serious bodily injury, one with complete paralysis.

Trevone Dequan Boykin is a former American football quarterback. He played college football at Texas Christian University (TCU), and was signed by the Seattle Seahawks as an undrafted free agent in 2016.

American actress and singer Lindsay Lohan has led a high-profile life since her youth as a child model and actress. Following commercial success and critical recognition, Lohan secured her status as a teen idol and received intensive media attention. Following a slew of legal problems and arrests, Lohan received media scrutiny. Her legal problems continued until 2015, the first time she had been probation-free in over 8 years. Alongside her legal problems and substance abuse struggles, her turbulent family life and personal relationships also been highly publicized and documented.