In zoological nomenclature, a subphylum is a taxonomic rank below the rank of phylum.

Where convenient, subphyla in turn may be divided into infraphyla; in turn such an infraphylum also would be superordinate to any classes or superclasses in the hierarchy.

Not all fauna phyla are divided into subphyla. Those that are include: 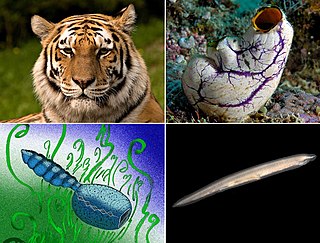 A chordate is an animal of the phylum Chordata. All chordates possess 5 synapomorphies, or primary characteristics, at some point during their larval or adulthood stages that distinguish them from all other taxa. These 5 synapomorphies include a notochord, dorsal hollow nerve cord, endostyle or thyroid, pharyngeal slits, and a post-anal tail. Chordates get their name from their characteristic “notochord”, which plays a significant role in chordate structure and movement. Chordates are also bilaterally symmetric, have a coelom, possess a circulatory system, and exhibit metameric segmentation. 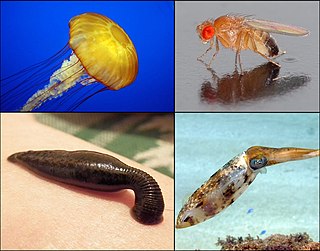 Invertebrates are animals that neither possess nor develop a vertebral column, derived from the notochord. This includes all animals apart from the chordate subphylum Vertebrata. Familiar examples of invertebrates include arthropods, mollusks, annelid, and cnidarians. 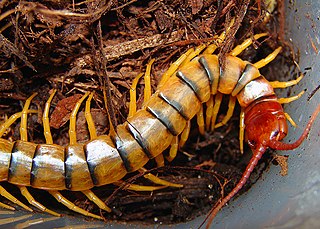 Division is a taxonomic rank in biological classification that is used differently in zoology and in botany.

Palaeozoology, also spelled as Paleozoology, is the branch of paleontology, paleobiology, or zoology dealing with the recovery and identification of multicellular animal remains from geological contexts, and the use of these fossils in the reconstruction of prehistoric environments and ancient ecosystems.

Amorphea are members of a taxonomic supergroup that includes the basal Amoebozoa and Obazoa. That latter contains the Opisthokonta, which includes the Fungi, Animals and the Choanomonada, or Choanoflagellates. The taxonomic affinities of the members of this clade were originally described and proposed by Thomas Cavalier-Smith in 2002.

The phylum Sarcomastigophora belongs to the Protista or protoctista kingdom and it includes many unicellular or colonial, autotrophic, or heterotrophic organisms. It is characterized by flagellae, pseudopodia, or both.

Blastozoa is a subphylum of extinct animals belonging to Phylum Echinodermata. This subphylum is characterized by the presence of specialized respiratory structures and brachiole plates used for feeding. This subphylum ranged from the Cambrian to the Permian.

In biology, a phylum is a level of classification or taxonomic rank below kingdom and above class. Traditionally, in botany the term division has been used instead of phylum, although the International Code of Nomenclature for algae, fungi, and plants accepts the terms as equivalent. Depending on definitions, the animal kingdom Animalia contains approximately 31 phyla; the plant kingdom Plantae contains about 14, and the fungus kingdom Fungi contains about 8 phyla. Current research in phylogenetics is uncovering the relationships between phyla, which are contained in larger clades, like Ecdysozoa and Embryophyta.

The Capricorn lizardfish(Synodus capricornis) is a species of lizardfish that lives mainly in the Pacific Ocean.

Life form is an entity that is living, such as plants (flora) and animals (fauna). It is estimated that more than 99% of all species that ever existed on Earth, amounting to over five billion species, are extinct.

The biological systematics and taxonomy of invertebrates as proposed by Richard C. Brusca and Gary J. Brusca in 2003 is a system of classification of invertebrates, as a way to classify animals without backbones. 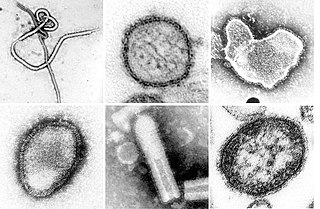 Negative-strand RNA viruses are a group of related viruses that have negative-sense, single-stranded genomes made of ribonucleic acid. They have genomes that act as complementary strands from which messenger RNA (mRNA) is synthesized by the viral enzyme RNA-dependent RNA polymerase (RdRp). During replication of the viral genome, RdRp synthesizes a positive-sense antigenome that it uses as a template to create genomic negative-sense RNA. Negative-strand RNA viruses also share a number of other characteristics: most contain a viral envelope that surrounds the capsid, which encases the viral genome, -ssRNA virus genomes are usually linear, and it is common for their genome to be segmented. 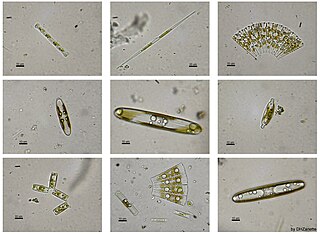 Diatoms belong to a large group called the heterokonts, which include both autotrophs such as golden algae and kelp; and heterotrophs such as water moulds. The classification of heterokonts is still unsettled: they may be designated a division, phylum, kingdom, or something intermediate to those. Consequently, diatoms are ranked anywhere from a class, usually called Diatomophyceae or Bacillariophyceae, to a division (=phylum), usually called Bacillariophyta, with corresponding changes in the ranks of their subgroups.