Sudheesh (born 28 March 1972) is an Indian film actor from Calicut who predominantly works in Malayalam film industry. Sudheesh's father Sudhakaran Nair was an actor who has done notable roles in numerous films like Gulmohar and Khaki. The father-son duo has acted together in many films. [1] Similarly, Sudheesh and his son Rudraksh Nair has acted together in films such as Kochavva Paulo Ayyappa Coelho .

Sudheesh is the only son of T. Sudhakaran Nair and Suryaprabha. He did his schooling from St.Josephs Calicut and higher studies in St. Joseph's College, Devagiri. Sudheesh is married to Dhanya on 30 March 2005. They have two sons Rudraksh and Madhav. [2] [3] His father died on 4 January 2016 aged 73.

Mohanlal Viswanathan, known mononymously as Mohanlal, is an Indian actor, producer, playback singer, distributor and philanthropist who predominantly works in Malayalam cinema besides also appeared in Tamil, Telugu and Hindi language films. One of the most admired Indian actors, Mohanlal has had a prolific career spanning over four decades, during which he has acted in more than 340 films. He is regarded as one of the greatest actors in the history of Indian cinema. In addition to Malayalam, he has also appeared in other Indian language films. Mohanlal has won five National Film Awards—two Best Actor, a Special Jury Mention and a Special Jury Award for acting, and an award for Best Feature Film, also nine Kerala State Film Awards and Filmfare Awards South and numerous other accolades. The Government of India honoured him with Padma Shri in 2001, and Padma Bhushan in 2019, India's fourth and third highest civilian honours, for his contributions to Indian cinema. In 2009, he became the first actor in India to be awarded the honorary rank of Lieutenant colonel in the Territorial Army. He received honorary doctorates from Sree Sankaracharya University of Sanskrit in 2010 and from University of Calicut in 2018.

Madath Thekkepaattu Vasudevan Nair, popularly known as MT, is an Indian author, screenplay writer and film director. He is a prolific and versatile writer in modern Malayalam literature, and is one of the masters of post-Independence Indian literature. He was born in Kudallur, a small village in the present day Anakkara panchayath in Pattambi Taluk, Palakkad district (Palghat), which was under the Malabar District in the Madras Presidency of the British Raj. He shot into fame at the age of 20 when, as a chemistry undergraduate, he won the prize for the best short story in Malayalam at World Short Story Competition conducted by The New York Herald Tribune. His debut novel Naalukettu, wrote at the age of 23, won the Kerala Sahitya Akademi Award in 1958. His other novels include Manju (Mist), Kaalam (Time), Asuravithu and Randamoozham. The deep emotional experiences of his early days have gone into the making of MT's novels. Most of his works are oriented towards the basic Malayalam family structure and culture and many of them were path-breaking in the history of Malayalam literature. His three seminal novels on life in the matriarchal family in Kerala are Naalukettu, Asuravithu, and Kaalam. Randamoozham, which retells the story of the Mahabharatha from the point of view of Bhimasena, is widely credited as his masterpiece.

Master Chief Petty Officer Krishnan Nair, better known by his stage name Jayan, was an Indian film actor, naval officer, stunt performer and cultural icon of the 1970s and 1980s. He starred in over 150 Malayalam films. During his film career, he was primarily an action star and was particularly famous for his macho image and unique style. He was reputed for his chauvinistic appeal and well known for performing stunts of a dangerous nature on his own. By the late 1970s, he became the most popular superstar, lead actor and bankable star of Malayalam cinema and has been acclaimed as the first action hero of Malayalam cinema. Jayan is widely regarded as one of the greatest actors in the history of Malayalam cinema.

Nambiathusseril Varkey John, better known by his screen name Sasikumar, was an Indian film director who worked in Malayalam cinema. Widely regarded as one of the greatest and most prolific film directors in the history of Indian cinema as well as world cinema, he has directed more than 141 films in his career which began in the mid-1960s. He is often referred to as Hitmaker Sasikumar due to the commercial success of his films. 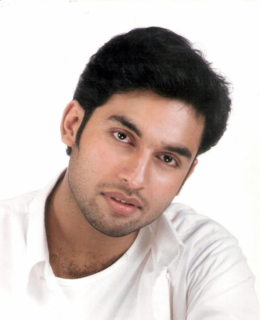 Jishnu Raghavan Alingkil, known mononymously as Jishnu, was an Indian film actor who appeared in Malayalam films. He was the son of actor Raghavan, who also directed Jishnu's debut film Kilipatt which was selected for the Indian Panorama.

Karuvattu Mana Vasudevan Namboothiri, better known as Namboothiri, is an Indian painter and sculptor, known for his line art and copper relief works. He has done illustrations for many Malayalam writers such as Thakazhy Shivasankara Pillai, Kesavadev, M. T. Vasudevan Nair, Uroob, S. K. Pottekkatt, Edasseri Govindan Nair, and V.K.N. and is reported to be one of the most prolific literary illustrators in the world. He is a former chairman of the Kerala Lalithakala Akademi. The Akademi awarded him the Raja Ravi Varma Award in 2003. He is also a recipient of the Kerala State Film Award for Best Art Director.

Baburaj Jacob, mononymously known as Baburaj, is an Indian film actor, director and screenwriter, who works predominantly in Malayalam cinema, and has also appeared in Tamil, Telugu and Hindi films. He began and established his career in cinema by playing antagonistic roles and graduated to comedic and character roles after Salt N' Pepper (2011). He has directed two Malayalam films and written a number of films.

Bhagyalakshmi is an Actress who is predominantly works on Malayalam Film Industry.She also worked for more than 4000 films as dubbing artist and a television host. She also interfered in many social disputes and was recognized as a social activist. She participated in Bigg Boss Malayalam season 3 and was evicted on Day 48. 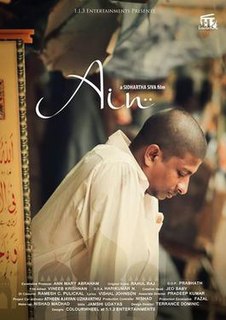 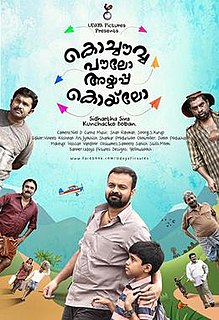 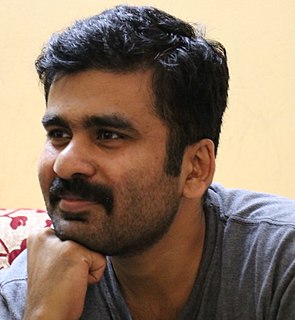 Gokulan is an Indian actor who appears in Malayalam films. He made his acting debut through the 2013 Malayalam movie Punyalan Agarbattis by doing the character of Jimbroottan, which became popular. He has so far acted in more than 30 Malayalam movies.